Gone And Back Again 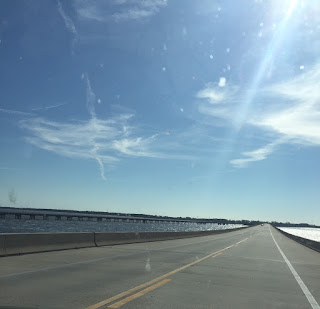 Has it really been two days since I posted?
How can that even be?
Not sure, but it would appear that it has.
But we are home now and it was a nice little weekend. We even went over to St. George Island, which is one island over from Dog Island but there's a bridge. And things like stores and restaurants, etc. That picture was taken as we crossed over the bay to the island.
We went over there so that Mr. Moon could show me a house that a friend of his has built on the bay on the island because he really liked some of the features and right now we are considering everything and in the market for ideas. It was a nice house, especially the back porch which was deep and wide and welcoming with a beautiful view of the dock and the water.
I do so want a dock. I half grew up on a dock and my most magical childhood moments were spent either on that dock or in a tree and I would love to be able to give some of that magic to my grandchildren.
The house was very nice. I was especially intrigued by the all-Viking kitchen. Get back, y'all! A Viking range, microwave, refrigerator, dishwasher, and wine cooler. I had a Viking range once and it was a piece of shit and that's a whole entire story but maybe the've gotten it together over at Viking. Their stuff sure does look pretty.
Anyway, we drove around the island some and walked down to the beach. Sure was a pretty day. 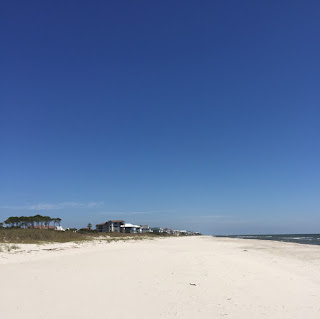 We went back to Apalach and had the best gumbo I believe I ever had. Too bad I forgot to take a picture before I ate most of it. 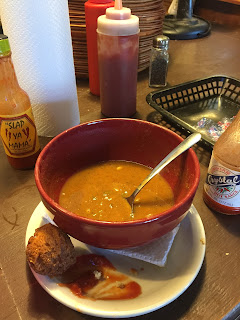 There were naps and I met up with my friend Marilyn and we barely got to talk before she had to go to Spencer's matinee. That evening we got dressed up and went and had a slice of pizza and then went to the show. It was amazing, as Spencer's shows always are. 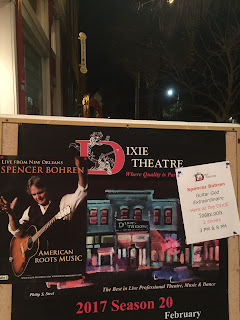 Some folks I knew from St. Augustine had come over for the show too. It's a very small world, y'all. Marilyn had her last baby in the bed of a midwife friend (Marilyn is a midwife too, although she no longer practices) who lived on the beach of St. Augustine. This midwife is a well-known and beloved figure in St. Augustine and although she lives in Virginia now, she coordinated a trip to include Spencer's gig in Apalachicola so that she could see her friends.
It was so good to see this woman. She's probably not really a woman. I think she may actually be a goddess. She's about the most beautiful creature I've ever seen on this earth and age doesn't seem to have touched her except to paint her hair with silver.
But it was an evening where there was complete silence while Spencer played, complete attention to his voice, his fingers, the music he made, the stories he told. I felt to honored to be there, to be reminded that the holy and the celestial can be mixed and braided with the earthly and the human and the result is far more than all of the parts on their own.

We had breakfast this morning at the Mexican restaurant with Spencer and Marilyn and again, although we got to talk, it just wasn't nearly long enough. We hugged good-bye in the parking lot and we drove on home where I found seven eggs and two hens on the nest. 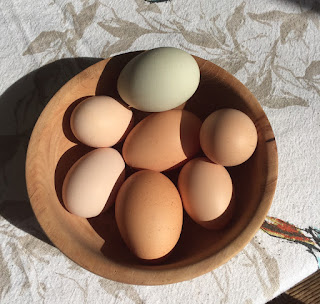 One of the hens was Violet and later I found two more little eggs where she'd been sitting.
The other hen was Miss Trixie, the oldest hen of all, and I'm not sure, but she may be fantasizing that she's setting eggs. I think she did raise a brood once. Anyway, she was in the nest all day long and there were no eggs beneath her.

And so it was just the nicest little trip and we did have the House of Tartts to ourselves the entire time which was just a treat but it's also funny that we would leave our very old house in Lloyd to go stay in another very old house in Apalachicola but that's the way we do it.

We have neighbors from across the street here watching the Super Bowl and I've announced that I won't be watching any of it and no one seems to care and I did not think they would. Owen called me today, all on his own, to invite us to come to their house to watch the game which I thought was sweet. I explained to him that we had people coming over so we couldn't come and I thanked him profusely.
I also talked to him about his basketball game yesterday which HE PLAYED TWO QUARTERS IN!
I tell you, the boy just needs time to get used to new things and then he's good.
I told him I was proud of him and he sounded pretty proud of himself.

So that's where I've been and here I am and all is well.
I hope you had a good weekend too.