I have spent almost all of this off-and-on rainy day in the kitchen. I pulled out my old canning kettle and the jar lifters and filled the kettle and set it to the boil with jars in it to sterilize.
I found a recipe for fig preserves in the Blue Ball canning book and covered my figs with boiling water and then drained them and stemmed them and cut each one in half. I didn't want to chop them as the recipe called for. My figs are not that big and I didn't think that chopping them would be necessary. I put the figs in my big pot along with a lemon, seeded and sliced, 3/4's of a cup of water and six cups of sugar.
This is what that looked like. 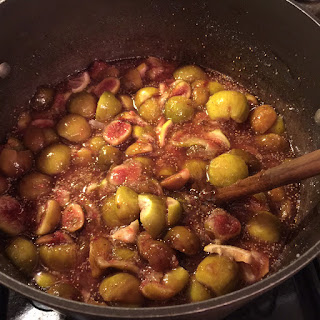 I heated and stirred until it got to what I declared to be a gel point. Do I have an appropriate thermometer? No. I do not.

I ladled the luscious stuff into the clean, hot jars, and set their lids and canning rings, which I had also boiled, upon them after wiping their lips off. Back into the canning kettle to process for fifteen minutes and now they are out and resting on my counter and I am proud of them.
Six half-pints and two pints and one small bowl of leftover that I've put in someone's (Mother's, Granny's?) beautiful old jelly dish. I have a dough rising for a loaf of sweet potato oat bread and so we shall have some this very night. 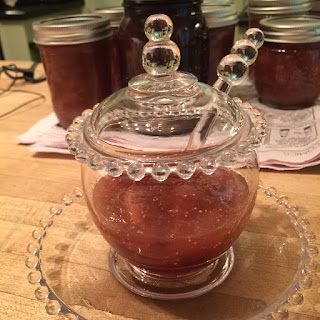 I had thought I was going to get out and pick up fallen branches today but never did. Instead I cleared everything out of the kitchen after the preserves were done and and swept twice and then mopped twice. The poor floor in there has received no real attention since The Grand Dishwasher Adventure began and I could not take it any more.

No. I did not find my simmer mats.

My husband and I have discovered that there is not one hotel room available this weekend from here to Pensacola and so I'm not sure what we're going to do. Perhaps we'll go to Dog Island. It's just so much work to get there. Making sure the boat is running properly, meal planning, grocery shopping, hauling it all over there and up the steps and put away and two days later, do it all in reverse except for the grocery shopping and meal planning.
Well, we shall see.
I very much want to get away with my sweetie, to just be the two of us.

Meanwhile, I am so tired right now that I all I really want is to lie down on the bed but I need to put everything back into the kitchen and laundry room and punch down my dough and turn it into a loaf and set that to rise and finish up the laundry and unload my dishwasher.

I am officially a dishwasher slut. I use it at every opportunity. I hear people say that they don't have enough dishes to fill theirs up every day but I am not having that problem. I wash everything but the iron skillets in it. My compost pot has never been so clean! Okay, I couldn't fit the canning kettle into it but if I could have, I would have.
And I do not feel guilty and I am not ashamed.
(Very much.)

Keith's first single off his new solo album due out in September dropped today. It's called "Trouble."

Here's a link for the Rolling Stone magazine article with the listening doo-dad you can use.
If you're even slightly interested.

They said of the single:

The track is a stripped-down, no-nonsense rocker built around a bevy of quintessential Keef riffs — ragged, haggard blues lines that meander the fretboard and sound at once precise and just a bit "juiced up and sloppy."