I feel extremely southern today. And after watching a video of Representative Jenny Horne in South Carolina address the House there concerning the taking down of the Confederate flag, I am damn proud to be one.

Julia Sugarbaker was not a real person but goddam trust me on this- she sure was based on a lot of them.

So what contributed to these feelings of southerness in me today? 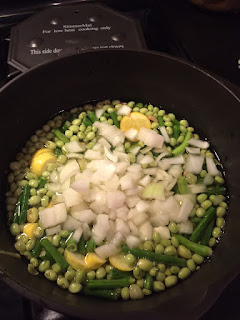 Well, I sat and shelled peas for about an hour and there they are with some yard-longs, snapped up, and one tiny squash and a bunch of onions. While I was shelling peas, I watched a movie, a documentary, called Larry Kramer In Love and Anger and I cried and if history doesn't remember him as one of the bravest, most dedicated humans ever to live, then we don't deserve to have a history.
I sat there on the couch, my big plastic bowl of peas in my lap, my thumbs working, and I remembered those horrible times when gay men were dying in the hundreds of thousands and Ronald Reagan and the FDA were sitting on their asses and it took the people, the people, y'all, to get shit done and it did get done and because of the work Kramer and others did, millions are still alive who would not have been.
Reminds me of our Elizabeth and all the parents and the Stanley brothers, trying to get this hemp oil legalized for the thousands and thousands of children and adults who might well die without it.
Phew.
Okay. 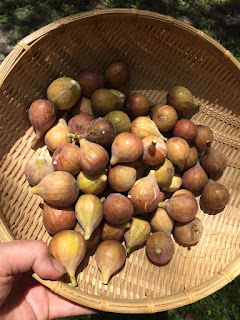 A beautiful basket of figs.

So to top everything off this evening, I'd like to post this video James McMurtry made about the Forgotten Coast, as we call it. I know every place in this video and yep, that's where we plan to retire.

Some of you may even recognize some of these scenes from my posts about going down to the coast.

Anything else I should talk about?
Ah, probably not.

I'm going to go peel some shrimp to put in a salad to go with the peas and rice. Our neighbor's coming over for supper. Maybe he'll bring some more of those boiled peanuts he made last week. They were the best.

Say what you will about the south, sometimes it's a damn fine place to live.

P.S. He did not bring boiled peanuts. He brought me a beautiful bowl he made out of downed pecan wood.
See what I mean?
Yeah.