Tip for the day:
It is almost impossible to change into a swim suit in a parked car and preserve your modesty when there are people about and your body is hot and sweaty.
Trust me.
But it was worth it, even though we only got to be in the water for a few minutes before the sky went black and lightening started forking through it.

More on that later. 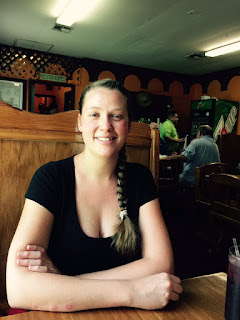 After lunch we went to the local Humane Society thrift store. They have good stuff there. Jessie bought a copy of a Moosewood cookbook for a buck. Then we went to a antique place and had a fabulous time wandering around. The only thing we bought there was a big puzzle for Owen. I hope he lets me help him put it together. It looks really fun. 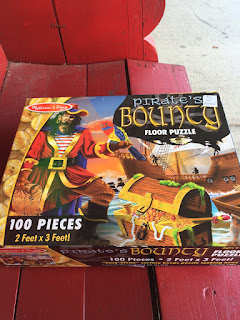 Then we drove the scenic route to the river and I swear to you- it took me at least fifteen minutes to do that bathing suit change. There's no restroom down there. I guess I could have walked into the woods but that would have been risking my life with the threat of Lyme Disease. Anyway, it made us laugh and then we went and got in the water and I was telling Jessie how much nicer it is now than it was thirty-five years ago with the new white sand and the sod they've laid and the dock.
"Did you used to bring Hank and May here?" Jessie asked.
"Yeah. I did. But it could be a hassle. Lots of crazy people who liked to catch gators if they saw them. You know, not nearly as classy as the people here now."
We were standing about five feet away from a guy who, as Jessie described him, looked like he might be familiar with meth, who was wearing a Batman T-shirt.
We giggled.
Some kids spilled out of a canoe a little ways down the river and three guys immediately struck out towards them but everything was fine. For one thing, the water was pretty shallow. For another, the kids were wearing life jackets so no one drowned. But I thought it was pretty cool that the guys on shore just immediately jumped in and started swimming towards that canoe. They got the canoe set right and the kids back in it and all was well.

Here are some pictures I took of people going off the rope swing. 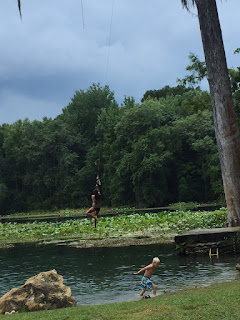 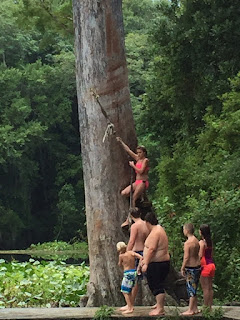 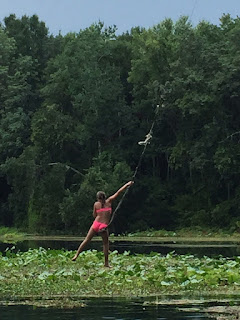 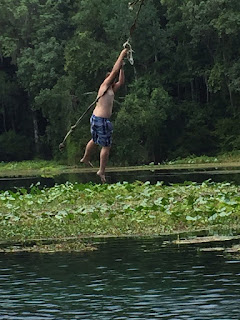 When it started thundering and lightening, we got back in the car and headed to Lloyd. I gave Jessie some peas and some zinnias and some fig preserves. She helped me get the sheets off the line and then went on home. I came in, made the bed and laid down on it. I'd say all that swimming did me in but we didn't actually swim at all. It was the bathing suit wrestling.

What a beautiful afternoon.

In a completely unrelated matter, I was looking at Messy Nessy's site this morning and today's post is a good one, as so many of them are. This one featured photographs and papers of Ernest Hemingway's. I was scrolling through them when I saw this picture. 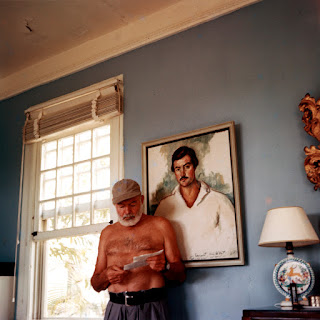 It was taken of Papa at his home in Cuba in 1953 and what struck me was that lamp. Do you see it?
Somewhere in my thrift-store adventures I picked this up a while back. 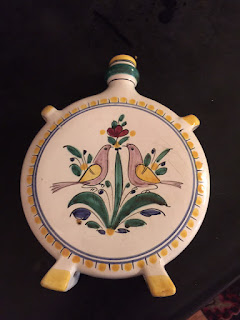 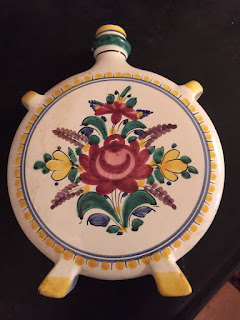 It has no markings on it but it struck my eye and it's obviously of the same manufacture as the little bottle that Hemingway's lamp was made from.

I just thought that was so interesting. Anybody have any information about these things?

So that was my day and I'm about to go and make some eggrolls. Mexican for lunch, Chinese for supper.