Well, it's been a long day.

On Monday Mr. Moon heard from the neurologist's office that they'd like him to come in for his EMG today and they'd share the MRI results then.
Originally, the EMG had been scheduled for August 1, so of course I go into La-La Land, imagining every sort of horrible thing that could be happening and this morning we were at the office at 9:00 am and waited and waited and waited and then got called back into the office and the tech did part of the EMG and then we waited and waited and waited and finally the doc came in. He started talking about the most completely random things while sticking needles into my husband's legs and registering whatever on the little EMG machine and we were just carrying on like we were all sitting around having a few beers and I was, by that point, disassociating so hard they're probably trying to scrape my essence off the ceiling of that room right now.
Finally, he says, "Okay, get your clothes on and let's go talk in my office," and we go in there and the doc starts talking about a lot of stuff and then somewhere in there he's saying that the MRI didn't show anything that would explain the nerve damage in the legs and there you go.
He wants to do blood tests for everything from Lyme to Lupus but I suspect that he suspects that this is a genetic thing (and he threw in the idea of a geneticist too, just for good measure, as well as doing a consult with a neurosurgeon but he didn't seem to think that was going to add up to much) so at this point, we know NOTHING except that there's nothing major going on in the spine and I suppose that's very good news but it doesn't really help my man much.
And at least Mr. Moon is not, apparently, going to be having any surgery anytime soon which is good because not only do we have two grandbabies coming but there is gator-hunting season coming on and then elk and oh yes, the regular deer season so THE MAN HAS NO TIME TO BE MESSING AROUND WITH SURGERY! OKAY?!
Okay.

We finally got out of there at 11:30 and went and had lunch at Fanny's so we could see our May and then he went back to work and I was going to come home and go to bed for the rest of the day but Lily texted and asked if I'd like to go to the river with her and the boys and so I said, "Sure," and we did and we all got in the coldy water and it really was nice and at one point, I found myself just standing in the river up to my waist, looking at the lily pads and trees and the breeze ruffled the surface of the water and I felt myself relaxing and it was good. It was very good.

Obviously, this is my new scene, the Wacissa River, and there are worse scenes.

So that was my day and here I am and thunder is rolling to the south and next time I go to the river I am going to take my little chair so that I can park my ass in the water.

I am a little bit overwhelmed but overall, incredibly, extremely grateful and I think this is a very good doctor, although he's just a bit of a character but he is confident and seems to be the sort of doc who wants to get to the bottom of things and my husband feels very comfortable with him.

And then of course, there are these guys. 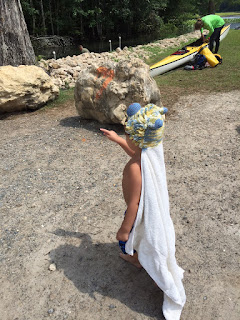 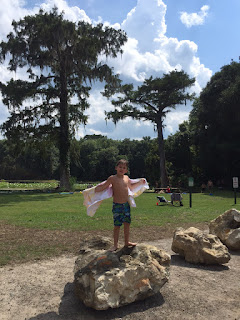 They insisted on warm showers and snacks when they brought me home because of course this is what you do at Mer Mer's house. Have warm showers and snacks. And so they did.
"Bye, Mommy," Gibson said when Lily was gathering up everything to go. "I stay here."
When we told him that no, actually he was going to his house, he was fine with that too.

Ah, the wind is picking up and the magnolia's top branches are swaying and I think we're going to sleep well tonight. At least I hope so.

Let's face it- it's summer in Florida and the heat and the sky and the trees are presences of and unto themselves. And it's all changing every five minutes, not unlike the surface of the river, and we might as well just relax into it, take it as it comes, because honestly, there is no other way. Take ourselves to the river, dunk our bodies in, raise our faces to the sky, and let it be.