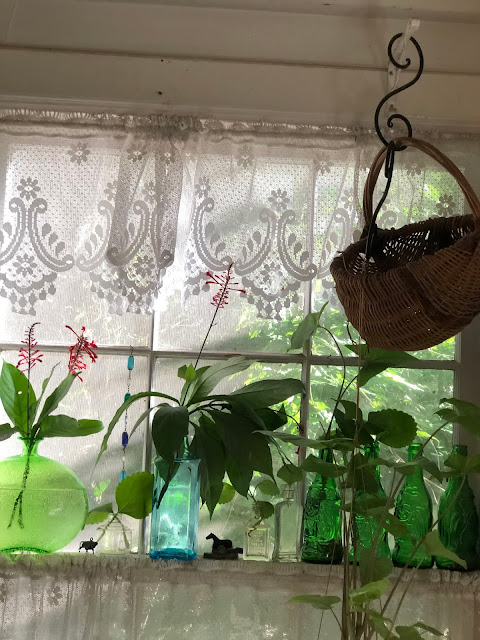 That window in the tiny hall off the kitchen is getting quite jungly. I cut a few fire spike to begin to root in bottles there. They had fallen over with the weight of themselves in the front yard and their blooms were doing no good to either hummingbirds or passersby. So- snip, snip. I have a Swedish Ivy plant that Jessie started for me that has grown leggy and I've trimmed a bit of it to root and add back to the pot to add fullness. And then there's some of that crazy philodendron that I've rooted so much of that it grows in pots everywhere and also, outside in the dirt where pieces of it have been tossed.

You cannot kill it.

This is the window in the bathroom off the kitchen. It has rooting and growing things as well. 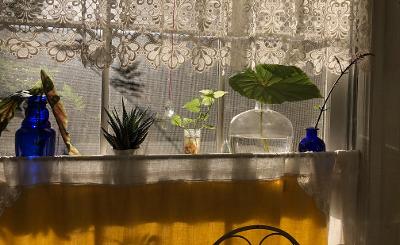 There's a polka-dotted begonia, a little succulent which I have not managed to kill yet, the most amazing tiny garden sweet potato which has been leafing in a shot glass for months, a giant begonia leaf, and another sprig of fire spike.

Growing things soothe my heart, my soul. I need to have them all around me and thank goodness, I am able to do that. I keep wondering how on earth I would manage this time in history if I did not have this tiny piece of ground with trees and plants and a place to make a garden, a place to keep the chickens which do sustain me in ways that go far beyond the protein of their eggs. And let us not forget the sky and the birds who sing and twitter and even the squirrels which run and dart and jump from branch to branch, their toenails skittering on the tree bark.

A few other growing things visited me today. 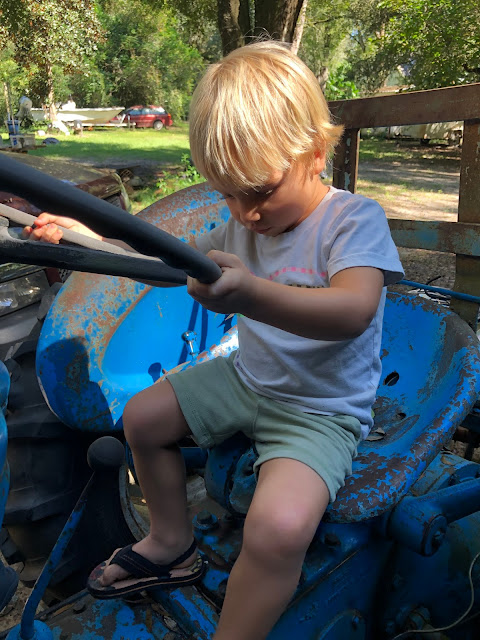 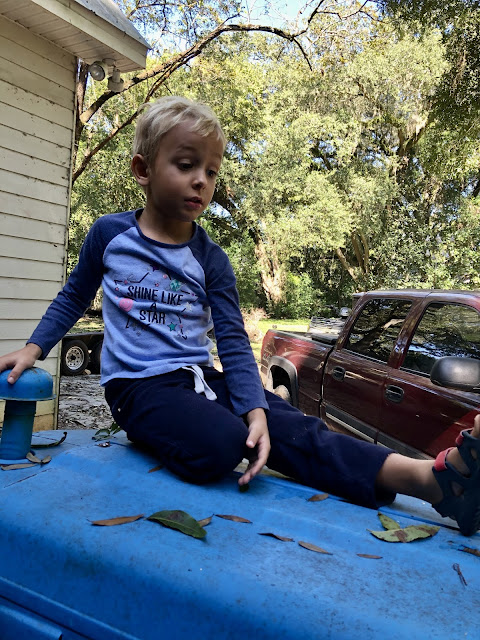 They burst into the kitchen door and although August paused briefly to let me hug him, Levon went right on by, all too eager to find his favorite toys, to explore, to see what was up in Mermer's house.

He showed me his multi-tool which was clipped to his belt and it is a thing of wonder with screwdrivers and pliers and a magnet and I don't even know what all. He told me that when he really learns how to use it all he can help Boppy fix the play set. I told him that there are a lot of things around here that he can help Boppy fix and that is true.

Boppy was actually at work today. He bought a car for a customer and went into town to detail it and get it all ready for her, to get the paperwork in order, and all those things he does which are far beyond my ken. He's still not home.
Jessie and I got to visit while we followed the boys around as they played on the tractor and on the mower and August wanted to use his grandfather's jack to jack up the lawn mower but we said no, and then he asked if he could jack up air and his mother and I said he could so he did.

We watched a little Baby Bheem on the TV, cuddled on the couch together under a blanket because it was chilly in my house. Well, for us it was chilly. In fact, today has been so very, very beautiful. The air so clear and everything so sharply defined, the coolness such a tremendous relief. I was quite happy that the boys let me put my arms around them on the couch, and Levon squeezed my little finger as he watched the TV and we all laughed and laughed and laughed at the mischief Baby Bheem got into with his friend and a calf and the chickens and a scarecrow. It is such sweet silliness.

We made a lunch and ate it on the back porch and there was more playing outside and then we came in to read books and I read the Lorax to them and then Duck in a Truck because that is Levon's favorite. I am happiest, I think, when I am reading out loud to my grandchildren. I miss acting. Not in a desperate way, but in a gentle way, a sweet nostalgic way, and being able to make funny voices and become the characters in the stories I am reading brings me great pleasure. Such great pleasure. And having them sitting next to me, squished up together on the love couch (as Owen calls it) makes it heaven.

After they left I tidied up some, folded some laundry, put it away, dragged some branches to the fire pile, cut some pinecone lilies to put in a vase, snipped that fire spike to root. Now I've got a broth simmering that I'm making for a soup with ramen noodles. There are bits of carrot in it, and shallot, dried mushrooms, garlic, ginger root. It is a very, very simple dinner. There will be kale and tofu and an egg in each bowl as well as the ramen.

And so everything is good in its simple and easy way and yet, because I watched an hour of that debate last night I have been completely un-easy, disturbed and roiled to a point of anxiety which is pervasive, free-floating, as gray and hazy, sticky and thick as generations of spider webs, untouched in years.

I've never seen such a massive vomiting of lies and anger and petty truculence, belligerent bullying and inhuman cruelty in my life. I kept looking at Trump's face, at how ugly it is because of the way he has set his mouth and narrowed his yes all these years in a sneer of disdain. His mental problems are vast, his ability to empathize or even try pretend to any sort of decency is completely missing.

We watched an hour of it. I don't know how. I do not know why. And then I got up, put my crocheting down, and said, "I am so tired."
And I finished cleaning up the kitchen and took a shower and went to bed and I did not sleep well.
I see no reason to watch any more of that poisonous venom and I feel so very sorry for Joe Biden. I feel so very sorry for all of us.

Here is what the banana bloom looks like today. 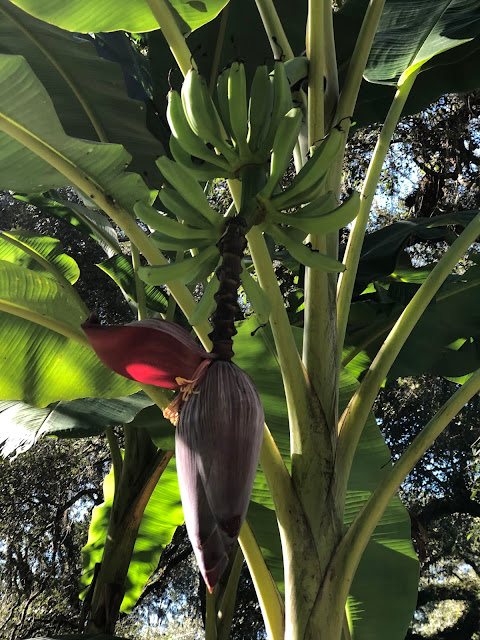 I wish for all of us peace and everything that means.
Love...Ms. Moon
Posted by Ms. Moon at 6:41 PM