How Do We Honor A Great Soul? 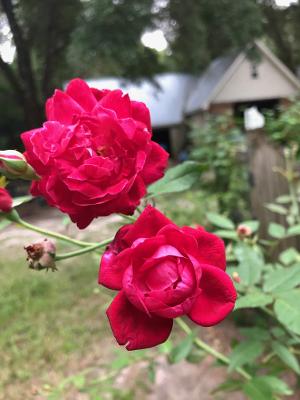 The roses are putting out a fall bloom and I suppose when they're all done, I should prune them back. It would appear that we are about to get some cooler temperatures here. My weather widget says we're going to get down to 64 here tonight, 62 tomorrow. Any sort of change which is normal change, any sort of relief from any aspect of the past few months seems unbelievable somehow.
And yet.
Perhaps we'll open up the house.
I don't know. That seems like such a huge decision. Everything does.
Ruth Bader Ginsburg's death was a normal, natural event, strictly speaking. The most unbelievable thing about it being that she had held on for so very long when I am convinced that 999 people out of a thousand would have died long before from the complications of various types of cancer she had, from the stress, from the sheer weariness of hanging on.
She was not a woman to give up, though, was she? She had a very specific and real reason to stay here as long as she possibly could and she pushed the envelope of that particular goal as far as anyone could.
We owe her so much. We owe her memory so much. We owe her spirit so much. We owe her wishes so much. We owe her accomplishments so much.
With her mind she changed the world. And always for the better. Justice was her super power and obviously, what she lived for.

Last night Lily and I made a plan to meet up at the Hilltop today to get lunch which we could eat outside. And so we did that. Mr. Moon was able to join us too and we ordered our shrimp sandwiches and hamburgers and onion rings and fried okra (Owen!) and then we waited and waited and waited at the covered tables. 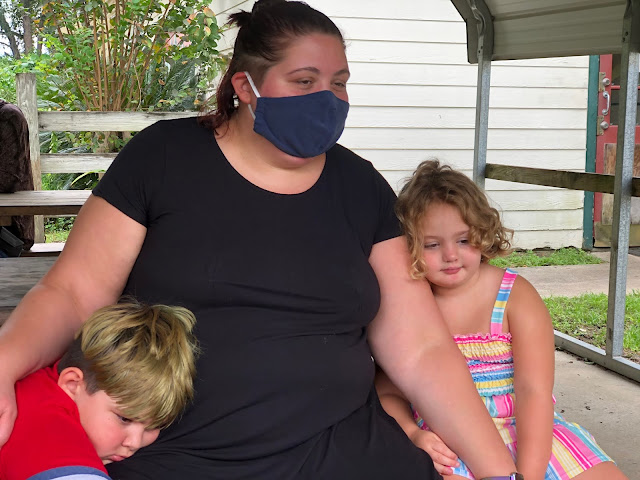 Maggie and Gibson were certain that they would die of hunger before our food was ready. And it did take a long time. But we chatted and the boys told me things that are going on in their lives with school and video games and the river that had run through their property when we got all that rain. It was so good to just talk to them.
No one but us at the Hilltop was wearing masks. Not even the employees. And I suppose we should have just walked back on out when we saw that but we didn't. We merely sighed and accepted.
The food did finally arrive and with it, the flies came around too. So many flies that Maggie, despite her state of near starvation, refused to eat and closed up her to-go box to take home where there were no flies. Just like with the non-mask wearers, I let the presence of the flies slide. At least flies aren't generally deadly.
This all makes the experience sound rather dreadful but it wasn't. It was a lick, a taste of normalcy. No pun intended. The food was fine but it was the act of sitting down with family to take a meal that made it all so lovely. "Would you like some ketchup?" "Trade you an okra for an onion ring." The most prosaic of pleasures, fully appreciated.
I don't have much else to talk about. We watched "My Octopus Teacher" on Netflix last night and it was astounding. The most beautiful underwater footage I've ever seen and a most unusual story. It was a balm after the news about Justice Ginsburg.
I'm having a very hard time these days trying to maintain any hope whatsoever about the future of our country and of the world in general. People don't listen to scientists and would not, will not do what they say we must in order to save our planet. I'm as guilty as the next person. Religion obviously isn't going to save us. Chant, pray, prostrate and pretend all you want. Not going to change a thing, not going to save so much as a bumblebee. Most religions seem to have acceptance as one of their most basic tenets.
And it has always been very hard for me to define, even for myself, the line between acceptance and denial. Which is which and why is one superior over the other? Neither one require much action to be taken.
But then I think of RBG and her spirit for fighting the good fight. For doing, not just saying. For turning thought into deed. For refusing to lay down at the altar of acceptance. For using her voice for the masses of the voiceless.
That helps a little.
Sleep well tonight. In peace if possible. I am trying to remember that above all, kindness is something we can all express and it is, in the most gentle way possible, a powerful force, a power that we can all access. That's something, I guess. I try to remember.
Love...Ms. Moon
Posted by Ms. Moon at 6:40 PM