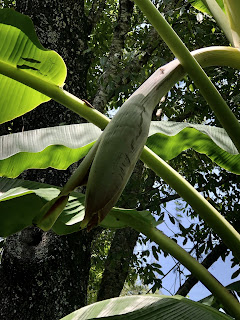 I just realized today that one of my bananas has set a bloom. I think that last year was the first year that ever happened and I've been disappointed that it didn't seem to be happening again this year but there you go. My bananas would be happier with more sun but they get plenty of fertilizer. I throw my kitchen scraps beneath them and the chickens scratch and eat and poop and what scraps they don't want, eventually compost and that's probably the richest dirt in the yard.

The day did not start out terrifically well. Mr. Moon and I started talking about having the boys over tonight or tomorrow night and he started really worrying about having been exposed to someone whose son has tested positive. She hasn't been around her son, but she has been around his daughter. She didn't tell Glen this until they'd been chatting for a little bit outside and not close up, but it freaked him out and the more he thought about it, the less he wanted to risk even that slight possibility of transmitting the virus to August and Levon and their family and the North Carolina family and so, he thought it best not to let the boys come spend the night until he's sure he doesn't have it.

I know he's right. And Jessie agreed. But it just hurt my soul and my husband's too, not to be able to have our stayover with those boys. To adopt them, as it were, for a night and a pancake breakfast. And for awhile, I was rather overcome with sadness but then Lily texted and asked if we'd like a back-yard visit. She wanted to bring over some beauty berries that they picked in their yard for me to try and make jelly with and of course I agreed to the visit and the beauty berries. I've always read that you can make jelly with them but I've never so much as seen a jar, much less tasted any.

And they did come over and brought their lunch and we all sat out back and chatted. Lauren came too and they brought Pepper whom Owen is teaching tricks to. That dog is pretty smart, I have to say. 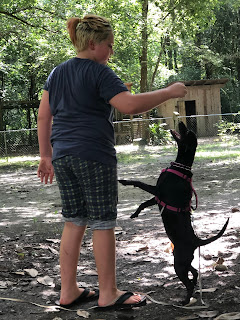 She had to be on the leash the whole time she was here because she was just way too interested in the chickens. 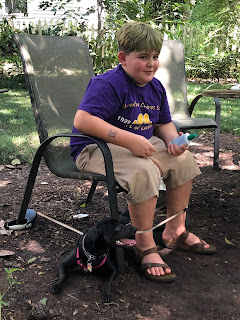 Here she is keeping Handsome Gibson tethered to his chair. Who's restraining who?
Magnolia ran to the hen house, first thing, as she always does. She loves being in the chicken coop more than I can begin to understand. And then she wanted me to go get her the little farm to play with on the back porch steps. Mr. Moon went and got it for her and she was happy. 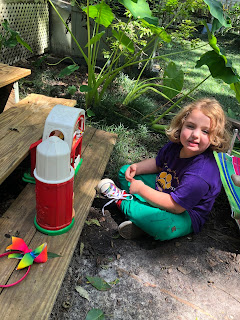 There she is, saying "cheese", as hot and red-checked as the last time she was here. She played quietly by herself for at least forty-five minutes. Lily says she plays alone with her dolls and doll house for hours in her room. She's like Gibson in that she makes up her own stories and plots for her dolls and animals to follow. I find this vastly fascinating and wonderful. Their imaginations are big enough to keep them occupied and interested for hours on end and if that's not fabulous, I do not know what is.
Eventually they had to go and I started simmering the chicken skeleton I had left after I made roast chicken and chicken enchiladas along with two frozen boneless, skinless breasts I had, to make chicken and dumplings. I had planned this meal for when the boys came over because August loves chicken and dumplings so much. That's what I made when we were all on Black Mountain last summer and I think he associates the dish with the joyful fun we had there. So I'm a little sad again, thinking about how he and Levon won't be here to eat it but their grandfather loves chicken and dumplings too, so it'll be fine.
Lis was going through some pictures this morning and sent me this one. 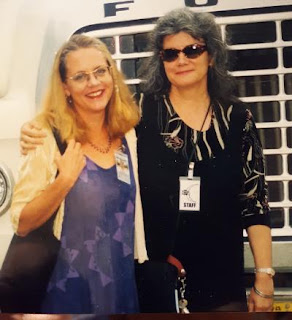 That was taken about twenty-five years ago or so. She'd talked me into working the hospitality tent with her at a festival. Of course, she was playing too. We served up food and drinks and kept the coffee pot filled for people like Vassar Clements who'd long been an idol of mine, and Bela Fleck and a whole lot of other people I can't remember now. Anything I've ever done with Lis has been fun and she's forced me out of my comfort zone many times and never once have I regretted it. In fact, she's made my life so much richer with her gentle urgings. I mean...I went to CUBA with that woman. And oh, we had the best time. When Lis sent me the picture I texted back, "Oh god we were cute!" and we were. I still have that dress. I'll probably have it until the day I die because I love it so much. The fact that it hasn't fit me in about fifteen years makes no difference whatsoever. It is a Mary dress and as such, it will stay in Mary's closet.
So that's been my day. Sadness, nostalgia, sweetness with my grandchildren and daughter, surprise at finding a banana bloom. Laughter at dog tricks and smiles for a little girl who likes to hang out in the chicken coop and who can create her own world and live in it with a Fisher Price toy.
And there has been love. Sometimes I get overwhelmed with the love and I feel like my heart might burst.
Well. I better go snap some beans and chop some celery and carrots. My chicken and dumplings have ALL the ingredients in them. I'd say my grandmother would have the vapors if she saw my chicken and dumplings but my grandmother was a yankee and didn't know chicken and dumplings from boiled cabbage and light bread. But someone's grandmother would have the vapors.
My friend Kathleen's mother told her to always keep an airplane sized bottle of gin in her purse just in case of the vapors which has made me wonder what in hell the vapors really are. Perhaps they are hot flashes. Perhaps they are anxiety attacks.
Whatever whatever they are, keeping a small bottle of gin in one's purse to drink if one should have them sounds like a wise idea to me.
Love...Ms. Moon
Posted by Ms. Moon at 6:27 PM