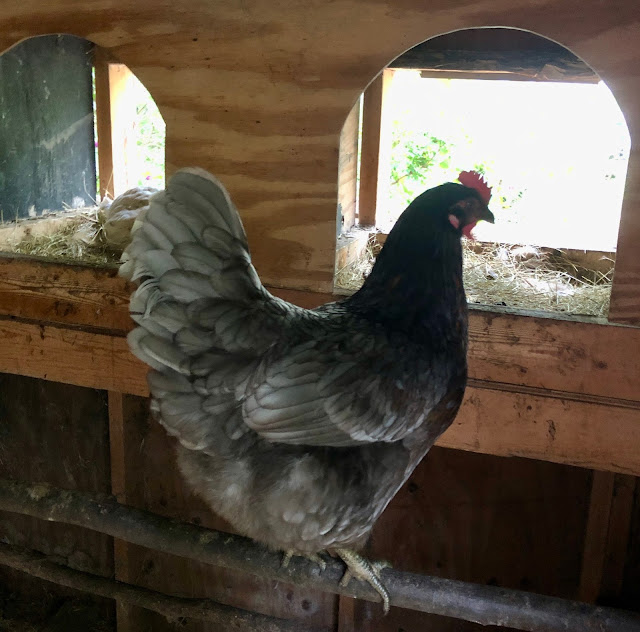 I took this picture of Miss Robin yesterday when I was cleaning the nests in the hen house and did not post it because the light is so funky but it does show her beautiful feathers nicely. They look like a painting to me. She was waiting for the nest she wanted to lay her egg in which was occupied by another hen. There were four other nests she could have laid that egg in but no, she wanted that particular one and she was willing to wait. This is one chicken-habit I do not quite understand. I think it may have something to do with the fact that if a hen goes broody, she will sit on whatever eggs are in the nest and so they all tend to lay in the same nests as an economy measure and a way to pass on genes without doing the actual work.
Perhaps.
When I watered the front porch plants last week I noticed that the two big ferns beside the front door had been torn up and flattened out as roosters sometimes do to encourage the ladies to lay in their pots. There were no eggs in them but when I watered yesterday I found half a dozen in one of the pots, mostly the blue green ones that I am pretty sure Pinto is laying. Clever chickens! Although why they feel the need to hide their eggs if no one is brooding, I do not know.
I do not know why I do half the things I do, either, so I'm not too worried about the mystery.

Look what showed up today! 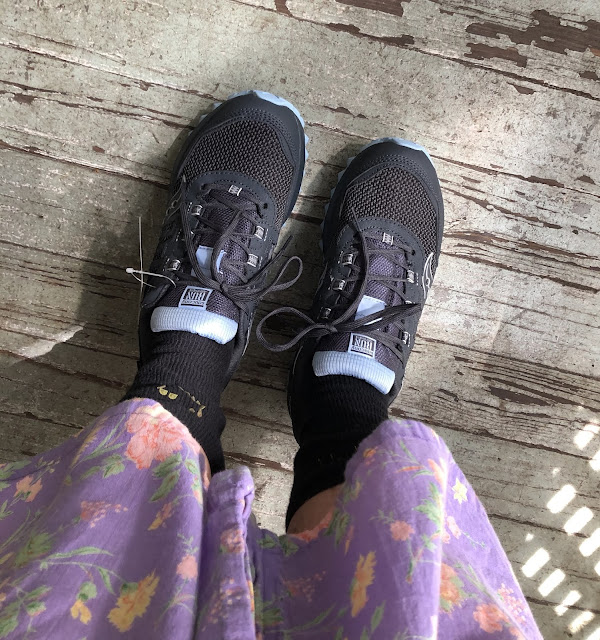 My Saucony's, all the way back from San Francisco! Of course now I have a moral dilemma. If indeed my account was refunded by the nice Saucony lady, do I call them back and tell them that they have arrived? Yes. Of course I have to. It's not their fault that the USPS sent the shoes on a month-long journey.
The good news is that they feel fine and fit well and now I have the new shoes I need. And by the way- I do not walk in a dress. That's just what I was wearing today when I tried them on. See the weird things on my left sock? Those are two types of stickers that clung to them as I walked through some underbrush yesterday. The green ones we call "begger's lice" (which is a highly un-PC name, I suppose) and the other is called Spanish Needle. It's a plant that looks like innocent, pretty little daisies and after you brush up against it, you'll be picking those nasty little needles off your clothes forever.
And that's your naturalist lesson for the day.
We've got the air conditioner back on. It's so humid although it's not terribly hot. By the middle of next week though, it's supposed to get much cooler with temperatures down into the fifties at night, highs in the seventies during the day.
I'll believe that when I see it.
Meanwhile, thank John Gorry for AC and being able to sleep comfortably and peacefully on cool, crisp, dry sheets.
It rained on and off all day long and we have postponed the birthday party until Sunday which is not ideal in all ways but it wouldn't have worked today because of the rain. Mr. Moon needs to build us a giant Covid shelter- a covered outdoor area where we can gather safely no matter the weather. I'll bring that up tonight after he's had a martini.
Or maybe I won't. He spent all day in town getting things done and he's not in the best of moods. Mostly he's just exhausted and disgusted with the government and the assholes who don't wear masks or if they do, don't wear them properly. He has every right to be disgusted.
And speaking of disgusting- Florida's governor has just proclaimed that restaurants and bars will now be opening up at full capacity despite the fact that our numbers are deplorable.
Fucking murderer.
I hope that this will make my husband feel better: 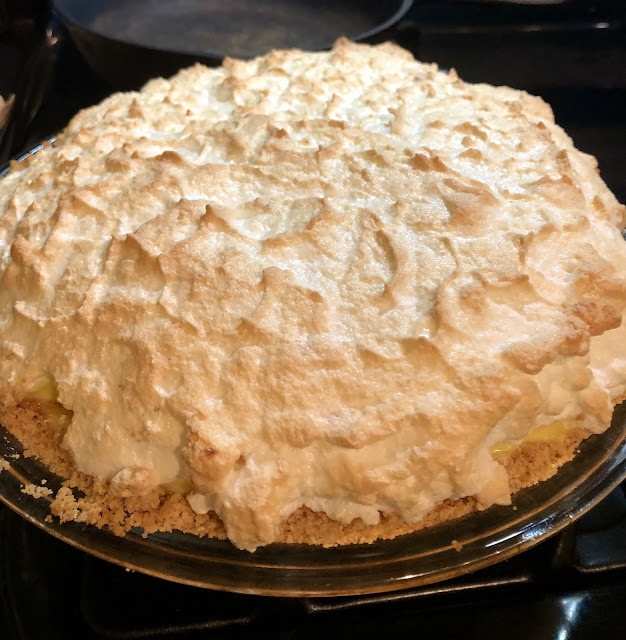 A luscious lemon meringue pie with graham cracker crust.
I see that Trump is going to nominate a woman who opposes reproductive AND LGBTQ rights to the Supreme Court.
Win-Win!
For Satan.
But in a more cheerful note- have you seen any of the videos of Trump and his Mrs. being booed as they stood in attendance by the casket of Ruth Bader Ginsburg? And then the crowd started chanting, "Vote him out! Vote him out!"
It won't help a damn thing and it won't affect Trump's views on anything and will probably only make him more determined, churlish, and mulish but god, it was a beautiful sight. I'd feel sorry for his wife but I just can't.
I have an icy martini at hand and I'll make a salad soon to go with the leftover chicken and spinach and rice I made a few nights ago. We'll watch another episode of Ratched which I do not recommend, either highly or otherwise, but it is vaguely entertaining and it is certainly eye-candy. I have wrapped up the birthday and non-birthday presents and this year I even remembered to get cards for everyone. Eventually it will be time to get in bed and there are clean sheets to look forward to as well as the book I am reading right now, The Letters of E.B. White, which I have owned for years and am finally getting around to. I am enjoying it.
This is my life. Some of it is so weird and odder than I ever could have expected and part of it is sweeter than I ever knew life could be. Let us just say that this is not at all what I expected. 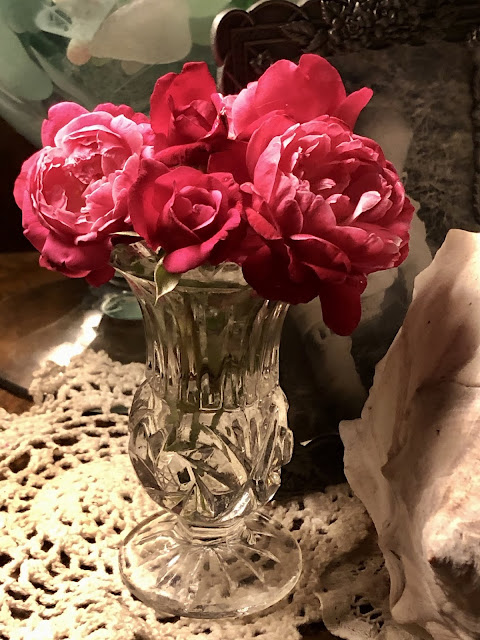