Life In The Slow Lane, Part MXI Or Something 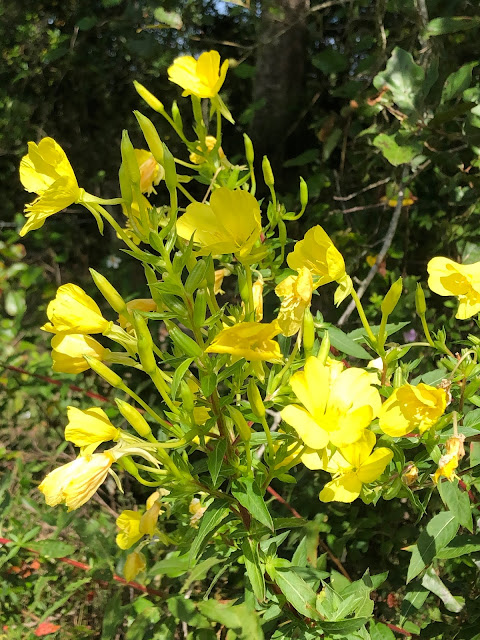 This may be a plant called Ozark Sundrops and it may not be. After a short bit of googling that's the very closest ID I've come to. If I could figure out a really good plant ID app for the phone, I'd even be willing to pay for it. Whatever those lemony yellow flowers are, they are blooming gloriously along Old Lloyd Road and the sulfur butterflies hovering and darting and dipping among them looked almost exactly like blossoms which had taken wing. Same color, similar size.
Beautiful.

I saw Jacob on my walk today. He's the man who sits outside his house, sometimes with his wife, sometimes alone. Their house is next to a few other buildings, some of which other people appear to live in. Probably like a family compound of some sort. There are always a plethora of cars waiting to be repaired along with big parts of machinery of all sorts and other assorted...stuff.
Today Jacob's sons were out in the yard, working on a car. After Jacob and I greeted each other he nodded to the men and said, "These are my sons."
I said hello but neither one of them seemed in the least interested in even acknowledging my presence. Since I can think of at least ten good reasons why they wouldn't want to, it didn't bother me. I'm generally surprised when anyone does acknowledge me. Jacob and his wife do, Pinot certainly does. No Man Lord does sometimes and sometimes he doesn't.
I respect that.

Beyond that, my day has been completely uneventful. I actually dusted and polished the piano and cleaned the keys with alcohol as my mother taught me to do so long ago. I cleaned off and polished the hallway vanity that is a de facto altar of sorts and also the low cabinet where the TV sits in the Glen Den. And that was enough cleaning for me.

Mr. Moon, on the other hand, was busy all day long stringing fishing line between posts he mounted on the garden fence to deter the chickens from flying into the garden. He even strung bright yellow plastic strips from the lines and before he was finished, the chickens demonstrated that they were not in the least disturbed by the lines and could easily manage to slip in between them. I could hear him yelling at them as the day progressed, his voice going from faintly amused to downright NOT IN THE LEAST AMUSED!

When he finally gave it up for the day and came inside I said to him, "All that work!" which is a family saying. Once, when Mr. Moon took Hank and May fishing on a little pond, he had the fish they'd caught on a stringer in the water tied to the boat, and somehow, they all slipped off and May, who was probably about four years old cried out, "All that work!"
To be polite, my husband smiled when I said that but again- he was not really amused. It was a lot of work, really and truly, and all for naught at this point.

Here are two of the bad chickens. 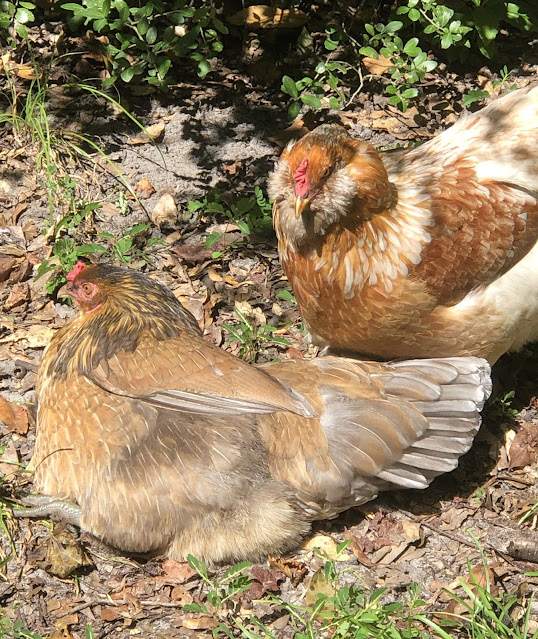 Eggy Tina and Pinto. Eggy Tina was enjoying a dust bath which is something that chickens not only love to do, but need to do. It helps clean their feathers of parasites and they love wallowing down into the warm dirt, letting it sift between their feathers, and sunning themselves. As I always say, they remind me of bathing beauties, perhaps Rita Hayworth sunning herself beside the pool at the Beverly Hills hotel.
My lovely ladies. I am so glad that my chickens have free and ample access to places where they can enjoy this necessary ritual. Their favorite places to do this are right next to dense undergrowth where they can quickly hide if danger threatens. Chickens are quite aware of the many predators which are always about, be they dogs or hawks. Roosters have different calls for ground threats and sky threats and are always watching closely for both.
And really, there's little more to say. Some days I seem to take an unconsciously planned day off of the horrible, terrible news. I did start to watch a video online this morning of Sarah Sanders defending Trump as if it were still her job and in the middle of it I thought to myself, "Why in hell am I watching this?"
And I clicked it off.
I already know how it ended.
I would rather hang my clothes on the line or feed my sourdough, thank you very much.
And so I did that.
Be well.
Love...Ms. Moon
Posted by Ms. Moon at 6:06 PM