Another Day Slips By 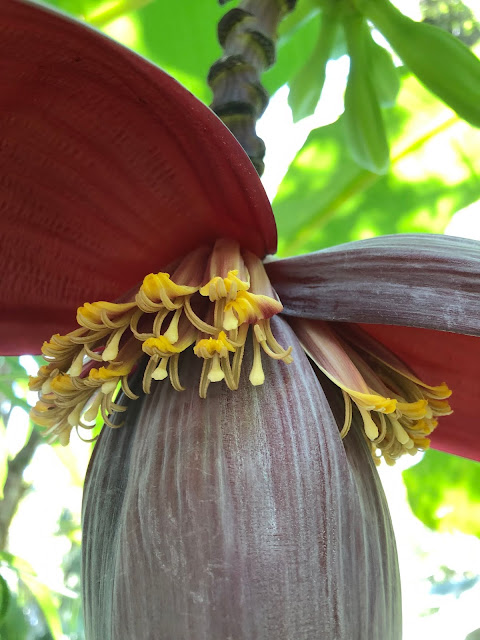 I know. I KNOW! How many pictures of the bananas do we need? You want to know the truth? That's the only damn picture I took today and so there you are and there you have it. I am still gobsmacked by this bloom and the resulting fruit but I doubt anyone else in the world is.

Dear god. I may need to do something to change my life. I feel myself becoming more and more attached to my house and my yard and my routines. This is no longer an amusing joke. It's becoming what could be called pathologic. Or one of those things that really is not normal or good. Today was another day wherein I did not leave Lloyd although I took a walk down to where Emma and Jacob live across the street from where the big-horned ram stands in its big-horned splendor. I did not see either Emma or Jacob nor did I see any of their sons but it does look like someone has been getting rid of some things in their yards. The lady who lives in the house next to No Man Lord's yard called hello to me from her porch and I called hello back and when the guy who lives in the house with the little yappy dogs passed me in his shiny red mustang he honked his horn and waved and I waved at him. When I was almost home a guy was trudging towards me with a weed whacker over his shoulder and when we got to speaking distance he gave me a huge smile and said, "I thought you'd already be home by now!" I had not one clue about who he was.
I tell you what- when I say that people recognize me, I'm not kidding you.

The rest of my day has been spent doing tiny little things like watering porch plants and taking trash. I scrubbed toilets and I finally attended to the job of cleaning out the freezer. I'd spilt coffee in it a few months ago and did not really do a good job of cleaning that up and my frozen stuff was all higgelty piggelty, bags of frozen vegetables mixed uncomfortably with bags of frozen shrimp. I've got a huge Costco-sized bag of frozen strawberries that I bought right before we locked down and I only ever use them to make the smoothies I used to make for my husband for him to drink before he went to the gym and now he's not going to the gym and neither one of us seems to be the least bit interested in smoothies. I've even put my blender away to give myself more counter space. I'm thinking I might just use those frozen berries to make some jam and why not? That can be a project for next week, I suppose. When Jessie was here yesterday she got out the big Dutch oven which came with the smaller Dutch oven I bought at Costco a few weeks ago and although I hadn't really thought I'd be using it, the very broad base of it make me think that it would be good for jam-making. Might as well try it out. So far the cheap enamel-clad cast iron is working well for me.

I made up a loaf of sourdough this morning, pushing it harder than I should have. To do it right, I really need to let it rest overnight in the refrigerator before I start the proofing process. So that's going to be a flattish loaf.

Here. I just took another picture. 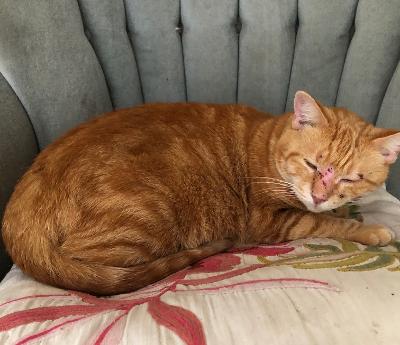 Would you look at that face? She had just healed enough from a cut above her left eye that had swollen the eye shut for it to open again and then yesterday she and Jack got into another fight that Jessie and I and the boys heard from a different part of the yard and ran to try and mediate and she's messed up again. Time to get out the neosporin and golden seal. I get so mad at Jack but honestly, she attacks him and just refuses to make peace and he is twice the size and weight she is. She's been on that pillow in the chair on the porch all day long. That poor cat is not right. She loves to cuddle with Mr. Moon in his chair but if he attempts to move at all she hisses and threatens to scratch and bite. I told Glen yesterday that she needs anger management classes and she does. We do love her, though. He's talking baby talk to her right now, kneeling down by the chair where she's recuperating.
I am not going to talk about politics today. I am just going to say that it was another beautiful day, cool and clear as a river in the Garden of Eden. I'll hang sheets on the line tomorrow.
And although I'm not going to talk about politics I am just going to say that it suddenly has occurred to me that it's like we are living with not one but two swords of Damocles hanging above our heads, one representing the upcoming election, the other of course being the constant threat of Corona virus.
I have to say that I am glad I'm on the oldish side now. How could anyone truly experience the feelings and emotions that children and young people should be feeling, deserve to feel, with all of this perceived and heavy weight above them?
I am aware that circumstances are never perfect for anyone but these are so far from lighthearted times. And troubles are only increased for all of us now.
"The sky is falling!" says Chicken Little.
We all nod and say, "Yes. Yes it is."
See you tomorrow.
Love...Ms. Moon
Posted by Ms. Moon at 6:22 PM