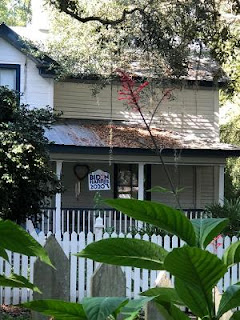 Our across-the-street neighbors have it going on with their Biden sign and we need to get one too. I had noticed that our next door neighbor had one about a month ago but then it disappeared. It has been replaced, however, with what appears to be a sheet which has been tied between his porch posts with the word "Biden" written in what looks to be green paint in huge letters. His original sign must have gotten stolen. This pisses me off if it's true because I've had to walk by my other side next door neighbors' infuriating Trump sign for four years now. Every time, and I mean every time I pass it, it takes all of my self-control not to try and run my walking stick through it or at least knock it over. I did thump it the other day out of sheer meanness.
I wonder what they think about Trump's reputed comments calling American war dead "losers and suckers". I imagine that they will hear about this as even Fox news is admitting it's true. I also wonder what Fox will have to say about this. Remember how they tore up Obama for NOT WEARING A FLAG PIN, for not saluting a Marine, and for wearing a light-colored suit?
Wouldn't it be a glorious thing if the comment he made about dead soldiers was the thing that broke the back of his presidency? I mean, it's one thing to have him on tape saying "grab them by the pussy" but it's another to know he called people who fought and died losers and suckers.

To some people, anyway.

It has been a slow, slow Friday. Truthfully, I haven't felt that well and I lazed around all day long. Mr. Moon, after putting another morning's worth of work in the woods in, has lazed a bit too. I actually laid down on the bed and read some of the book I'm reading, A Land Remembered, and then fell asleep. I haven't slept during the day in a long time. The book, by Patrick D. Smith is quite well-known in Florida as the definitive novel on early Florida pioneers and how some of those families became wealthy as hell. For years I've thought I should read it and I even started it a time or two but I just couldn't get past the first few chapters. The writing isn't the best and compared to Marjorie Kinnan Rawling's books, it's a disappointing effort. But I'm finally reading it now and although I still find the writing disappointing, I'm managing to stay fairly engaged. I'm trying to ignore what I find disturbing or obnoxious about it and just go with the story which is interesting. The particular family he writes about makes its original fortune by herding and pasturing the wild cows that were the descendants of the original Spanish cattle and selling them to be shipped to Cuba. Then they began to buy land which was ridiculously cheap. On the face of it, not a bad book but the descriptions of Black characters and Seminole characters are often cliched stereotypes although the author does paint them in a positive light.

I'm not a good book reviewer.

In other reading material, we got a card from August today with a surprise sloth in it! 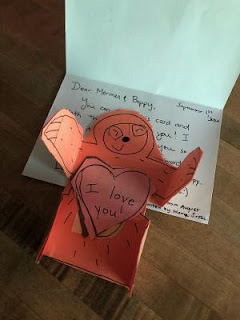 That boy does love a sloth. 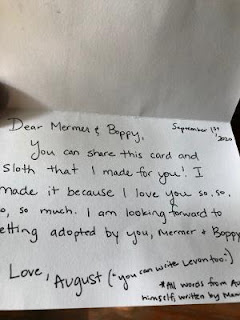 And here are his words. My favorite part of course is, "I am looking forward to being adopted by you, Mermer and Boppy." That family is heading up to North Carolina on Monday and it will be weeks before we see them. We may get to have them over on Sunday night for a "stayover" as August calls it, and their mom and dad can pack the car and pick them up on their way out of town for their big adventure. It is definitely long-past time for Vergil to see his family and for the boys to visit with their mountain family. This pandemic has screwed up every damn thing.
Here's another hurricane lily that I discovered in the yard today. 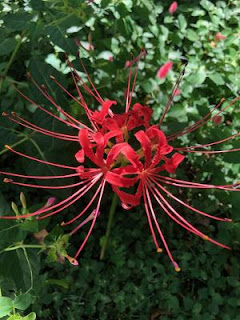 That one is full-bloomed. Every year they charm and amaze me with their delicate, reaching stamens. They are a folly and a fancy and they only last for a day or two. I love them.
Mr. Moon is about to make us a martini. We're going to have a quarantini call with Lon and Lis and tonight's supper is going to be leftover enchiladas which were quite fine. I have no avocado or cilantro to top them but they'll do. I line-dried the sheets today and am looking forward to their sweet crispness tonight. The sun is going down, the magnolia leaves are shiny, shining mirrors of reflected light.
It just occurred to me that I am not Marjorie Kinnan Rawlings either. I suppose there are many of us who write the story of Florida as it was, as it is. Not as the butt of a joke, but as a love story of sorts, even as there is so much about it that is hard or crazy or tacky or desperately sad. We love what we love, even the imperfections, and some of us have taken Florida as our lover and forgive her much, loving her for the wildness within her which surrounds and sustains us.
Happy Friday, y'all.
Love...Ms. Moon
Posted by Ms. Moon at 6:28 PM