Going Away, Coming Back 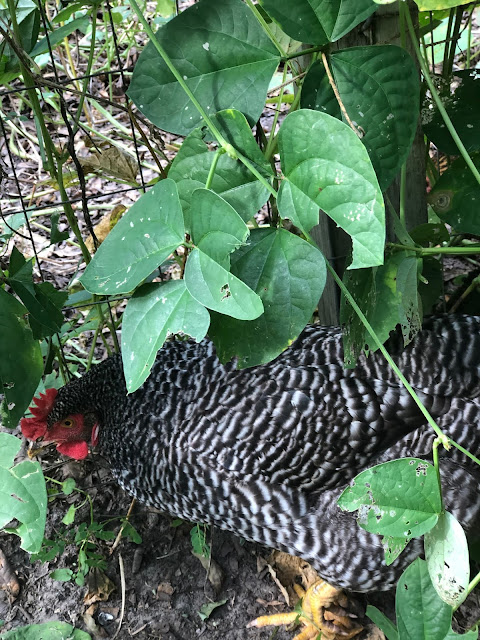 The chickens were all out by the garden this afternoon and in the garden too, to be truthful, and also on the fence (there's always someone on the fence, isn't there?) and I was trying to take a picture of how adorable they were and I took about ten pictures but none of them was worth a damn. Here's one of the barred rocks (Alice?) peeping out from behind the field peas which is what they were all after. Mr. Moon is going to have to figure out a way to keep those bad birds out of the garden because we're about to plant their most favorite vegetables which are the winter greens and lettuces. But this afternoon I did not begrudge them the peas at all and I spent a few minutes listening to them talk to each other in their comforting, soothing hen-tongue which I never tire of.

So I went to town today. I mean, I WENT TO TOWN! I had two prescriptions to pick up at two different places and I went to two different nurseries for seeds and a few plants and I even went through a drive-through and bought myself a falafel gyro and sat in a parking lot and ate it, enjoying every bite. I masked, of course, as did most of the other people I saw, but not all of them even though it has been mandated in Leon County that if you're inside in a public space, you are supposed to wear a covering over your mouth and nose.
As Mr. Moon said this morning before I left, it is surprising that there are not reports of masked people getting in altercations with unmasked fuckwads. Okay, he did not say "fuckwad" but I did.
Anyway, here are the seeds I bought. 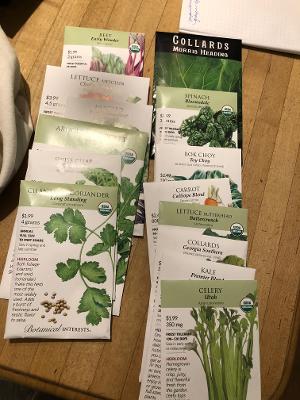 I have made a vow to myself that this fall I am going to space my plants out far more than I have done previously. I like to have some extra plants that I can thin for salads but as Lon has pointed out, I go a little overboard. And as I have pointed out, I CAN'T HELP IT!
But as GOD is my witness, I'm going to do better this year. I really, truly am because Lon and everyone else is correct in that spacing the plants gives them far more of a chance to grow up. And out.
Shall we say...bigger?
I'm going to try spinach again although I never do very well with that. Also bok choy. And I'm going to try celery for the first time. I'm also going to see what happens when I plant cilantro in the fall. It bolts so damn fast when I plant it in the spring but maybe it'll have more of a chance in the late garden.
That journey took me basically all day long and while I was gone, Mr. Moon accomplished this: 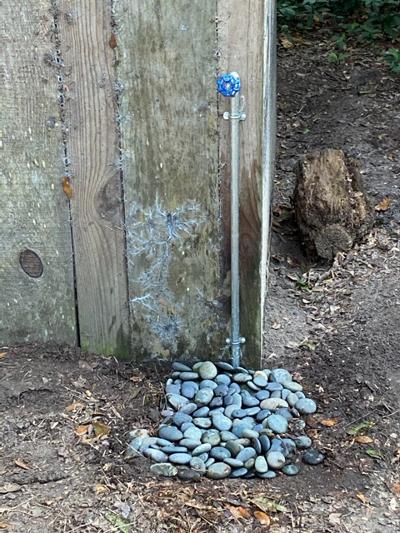 He ran a line from the garage to the hen house, trenched it up, laid pipe in it and hooked it up to a spigot. This will make filling up the chicken waterers so much easier. I appreciate this tremendously. I am sure that the chickens will too. Funny how when I was thirteen or fourteen and dreaming of what it would be like to fall in love and thinking of the things I thought a romantic man would be like, plumbing never really entered the picture. But I will say that I learned quickly and by the age of twenty-five, a man who could and would be able to make water more available to where I needed it had moved a lot closer up to the top of the list.
Going to town and venturing into places that were neither Costco nor Publix was actually good for me, I think. It was probably beneficial just to get out of my yard, out of Lloyd, and into places where there are humans if only to make me appreciate my house and home even more. I feel more cheerful tonight although I didn't really talk to anyone beyond Hey, how're you today? and Thank you very much.
Even the most dedicated of introverts are still human beings and as such, we need a reminder that we (and our partners, if applicable) are not the only people on earth. That we can still go out into the world and make decisions about purchases, to wander around in a nursery, enjoying the sight and smells of plants and trees and dirt, to order and pay for and eat something that we ourselves have not cooked. And then to drive home and pull into the place where we feel most comfortable, most safe, and most content.
And where the man who can build and plumb and garden and love waits.
I think I better go make him some supper.
Love...Ms. Moon
Posted by Ms. Moon at 6:17 PM