Home Girl Making It In The Film Industry. Plus- Jelly News

First let me say that the gumbo I made last night was delicious. I'd never made gumbo in my life! I guess I always thought you had to be a tenth-generation Cajun to make good gumbo or at least be infused with some sort of mystical power and know the properties of plants and herbs found nowhere in the world but deep in the swamps of Louisiana.
Turns out that although I'm neither of those things and I'm not sure my gumbo was what you'd call authentic, my gumbo sure wasn't bad. I made my first real roux, which is what had always scared me away from gumbo. THAT process did seem like magic to me. Mixing a fat and flour to make a thickening agent is something I can do in my sleep but to cook it long enough to have it turn dark, shiny brown without burning it?
Daunting.
But I did it and the rest was not very hard. Making the roux wasn't very hard either and despite the fact that some recipes say you have to stir that roux for forty minutes or so, mine darkened in the most lovely way in about ten minutes. So. Don't believe everything you read. And honestly, don't believe everything you believe.

I had an appointment to get my teeth cleaned this morning. I've been putting it off forever. When I made an appointment for September way, way back in June I had no idea that Covid would still be affecting our lives so profoundly. And I could have canceled and rescheduled but I just wanted to get it out of the way and I have an almost neurotic fear of developing some sort of horrible tooth problem without knowing it so off I went to the office where I had to sign a form which made me feel after reading it as if I was definitely going to get Covid from getting my teeth cleaned and that I was signing away my rights to sue them.
Whatever. Sometimes you just have to throw caution to the winds.
My teeth and gums are fine. I have stellar dental health. Now let's hope I don't come down with the virus. Tallahassee is not a very healthy place to be right now. Between August 2 and September 4, there were over 850 cases of confirmed Coronavirus at FSU. That's students, facility, and staff. That doesn't even sound possible. And yet, it is. I fear so much for Lily and May who both work with the public in grocery stores. Lily's Publix doesn't have that many students as regular shoppers but it has some and of course the virus does spread from one population to another and May works at the Co-op where a lot of students do shop.
May they be safe. Please.

After I came home I decided to tackle that jelly again. I poured it all out and went through the steps I listed yesterday and discovered that some of it had gelled a bit. But I just boiled it all down some more and added a little more sugar and more Sure Jell and it's so pretty 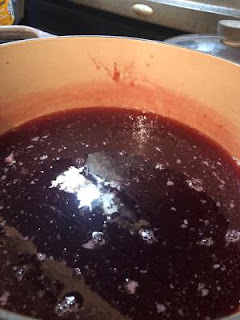 and it really tastes nice so I decided to go pick some more beauty berries in the yard and make another batch while I was at it. So I did. 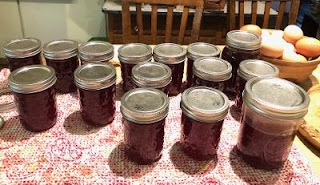 That's all of it right there. Jars and lids sterilized, end product processed in the canner. I hope it's fitten, as they say, to put on biscuits. I may or may not ever make beauty berry jelly again but I have now done it.
Two gustatory firsts in one week for me!
I know I've spoken here before about the musician Bill Wharton, aka The Sauce Boss, and how he was the second person I met in Tallahassee in 1974 and how he and his wife Ruthie took me under their wing when I desperately needed a wing to be put under and when I met them, they had two little girls, Annie and Mary. Annie was four, I think, and Mary was three. Those beautiful little elfin hippie babies grew up to be the most amazing women. Annie lives in LA and works in the art business and Mary lives in NYC and produces films. Her latest film is getting all sorts of acclaim. Won a bunch of awards at the LA Film Festival including Best Picture. Her daddy, Bill, also won one for musical score. The name of the film is Jimmy Carter: Rock and Roll President and I cannot wait to see it. Here's the trailer.
Y'all! It looks amazing! And from what I've read, it's a film that has great resonance in our time, right now. I don't know how most of you feel about Jimmy Carter but I loved that man. Still do. I mean- how can you not? I'm not going to say he was the best president we've ever had but I will say that he was quite possibly the best man we've ever had as president.
So anyway, I'm very excited about that and I can't begin to tell you how incredibly proud of Mary I feel. I can't really say I'm surprised she's achieved the honors she's receiving or that she chose the career she chose. I can remember distinctly sitting on the front steps of the Wharton's house way, way back even before Carter was president, listening to Mary tell me about a movie she'd seen. Even at the age of four or five she had a director's eye. She told me about every scene, every plot twist. It went on for longer than the movie probably had. And her parents raised her in a house that was full of music and art and goofy hippieness and absolute love and acceptance. I feel lucky to have been a witness to that. It helped inform me as to how I wanted to raise my own kids.
It's raining. I'm going to go dump the water out of the canning kettle and clean up the last of my jelly-making mess and heat up the leftover gumbo. It's been a better day than yesterday was. At least it has been since I got out of the dentist's office.
And let me say that Bill Wharton has become known for making a huge pot of gumbo on stage as he plays and has fed countless people who have come to hear the blues. His charity is called Planet Gumbo and he has played at many, many homeless shelters, made gumbo, and fed the folks in more ways that one. 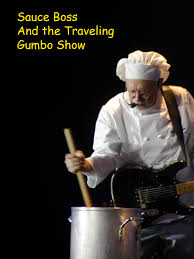