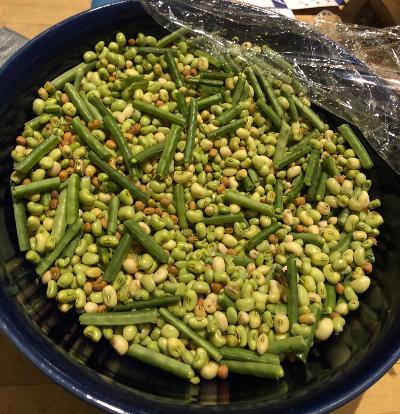 That is approximately six or seven Netflix-streamed episodes of "The Office" worth of pea shelling. In that bowl are two different varieties of peas and some of them, as you can see, are dried and brown because they stayed on the vine too long but they cook up fine.
Here's a close-up. 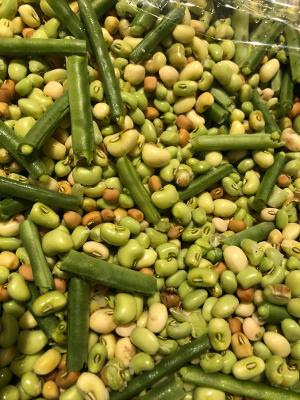 The green-bean looking pieces are what we call snaps. They were picked a bit too early and their peas are immature and although you CAN shell (or shuck) them, sometimes we just snap off the ends and then snap the little beans into pieces. They are good like that too. Here's a really close close-up with a quarter for scale. They are quite small. 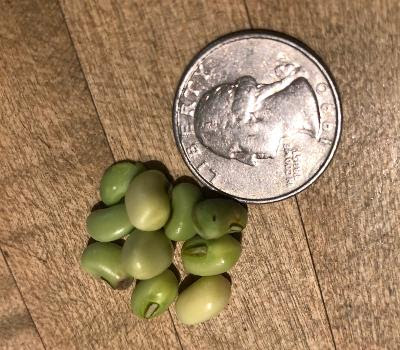 Ten to the quarter or so? Something like that. Shelling them is indeed time-consuming but as a mindless chore to be done while watching TV, a pleasant task. And they are delicious. So it's worth it all the way around. I did get quite a few ant bites while picking yesterday but that's just the way it is.

I knew you'd think so.

When I went to Costco today, I asked the sweet guy in the liquor store if he'd done anything exciting lately. He said that no, he was just trying to keep his head above water, working, and not much else. He asked me if I'd done anything exciting lately. I said, "Coming to Costco is about the most exciting thing in my life lately. So to me, you're living the dream, buddy!"
He laughed. But Kevin is quick to laugh. He's just a nice man.

I went to Publix too. We were out of bananas. And almost out of limes. Danger, danger, Will Robinson! More bananas have appeared on my bloom but they won't be ripe for quite awhile. One must have bananas. And limes. Of course I managed to find about a hundred dollars' worth of other stuff to buy, too. As always.

Besides that stuff, there's been little else. It's been raining again, on and off. It is, of course, the anniversary of 9/11. We all have so many memories of that day. That morning in particular. I was with Lon and Lis. Lis had had her appendix out and Lon and I had gone to fetch her from the hospital and the TV was on in the room and she pointed at it and said, "Look what's happening," and none of us could comprehend it and when we got in the car to go back to Gatorbone, Bob Edwards was on NPR and trying to make sense of it all for us and no one really understood what was going on but his voice was so calm and I still appreciate that. Then came the the other destructions and the endless loops of the devastating disaster videos and I drove home across the state, the sky empty of planes, my mind empty of answers, just knowing I had to get home to my children, my husband.
It is still unimaginable after all this time. And yet, more people have died now from Covid than they did on that day of terror.

I have no way to tie any of this up in a neat square knot. It's impossible. So I'll just say that it's Friday. Maurice is tormenting me by trying to walk across my keyboard as I write, rubbing her back on my chin. I think she may actually be mellowing a bit in her old age. She seeks out Mr. Moon when he is in his chair and yes, she still growls when he moves but she's not as apt to grab with her terrible claws and bite with her terrible fangs. Time has had its way with her just as it has with everything including me and you and our memories of that day when planes crashed and people died in the most horrible of ways. We haven't forgotten and those of us who were here will never forget and I still weep when I think of all of the pictures people posted of their missing loved ones, when I think of the heroes and the innocent who are gone.

Well. On that cheerful note I believe I will ask my man to make me a martini. "Olives or pickled green beans?" I will ask him. And I'll make supper and we will eat it and the rain will continue to fall and we will sleep on clean sheets and sleep as if the world was a safe place, a good place, which may be true here and there for a moment or so but then change on a dime, on a whim, on a breeze, and yet, we go on as if we had no idea because that's what you have to do.