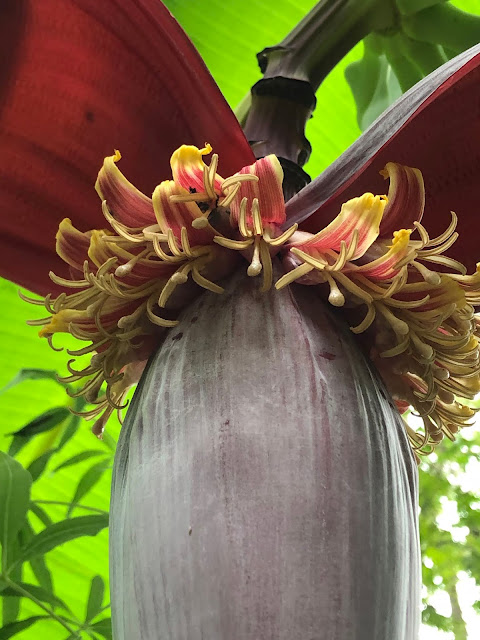 Another row of baby bananas coming on. I am completely fascinated by this process. You would think that I had the first blooming banana plant in the universe. 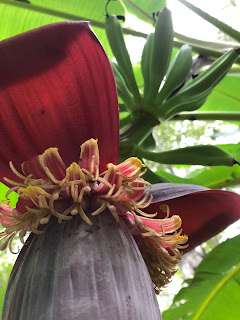 What a beautiful crown of flowers, marking the beginnings of more fruit.
Y'all. I am wearing a sweater. Okay, it's not wool or cashmere. It's cotton but still. It's a sweater-like garment. And yes, we here in Florida have what is fondly known as "thin blood" which tells us that we need to bundle up if gets down into the low seventies but that's just the way it is and it is a remarkable relief not to be sweating, to actually feel cool. I have the doors open to the outside and I swept the porches this morning. The air conditioning is off. In a bit of perfect synchronicity, it is the second day of archery hunting and Mr. Moon is off in the woods with what he is calling his "old man hunting club" to kick off the season. He was so happy that his long-sleeved camo shirt would feel good and won't make him sweat in the deer stand.
I am happy for him. The season of observing the woods and wildlife is upon him. His excitement this morning was almost palpable. As I always say- I do not understand his need to go into the woods to hunt but I understand fully that he does need to do it. And as I also always say, there is far more hunting involved than there is shooting.
He'll be back around dark-thirty tonight unless by some bizarre chance he gets a deer.
And he's getting vegetarian egg rolls for supper. With tofu. And he loves them.
I finished watching The Office a little while ago. All nine seasons. The finale was indeed grand. I love the way the characters developed over the years. The people who were originally background characters became as important and as richly portrayed and as multi-layered as the main characters to the point where, at the end, there was no real delineation. Everyone has a story. In life and on television too, if a series is given enough time, has the right actors and writers and directors in place. Entertainment becomes art. There are series we fall in love with because we fall in love with the characters.
I think of Northern Exposure.
I still miss those people. With all of my heart.
If Netflix streamed that, I'd be watching it over and over.
And I'm going to sign up for Hulu so that I can now watch the British version, the original. But first, I need a little time to grieve.
And so it has gone today. A little opening up of the house to fall. Another season which is a true demarkation of time unlike the hours of the clock or the pages of the calendar. The way the air feels, the way the sun slants, the way the green of all growing things changes, subtly sometimes, and sometimes dramatically, the smell of the earth as it goes from fecundity to rest. These are things that as I grow older I sense and recognize more and more fully, giving them my attention in ways that I did not when I was younger.
Just as I give my attention to the bloom of that banana which is as fancy and fabulous as a fan dancer, fully made-up and dressed in the colors of the wildest birds, hiding her treasure until it is time, in the slowest of reveals.
I better go start chopping up vegetables and pressing tofu. Egg rolls are not hard to make but the preparation is time-consuming. This is true for many things, isn't it? At least, for the really good things.
Maybe we should take hope in that thought.
Love...Ms. Moon
Posted by Ms. Moon at 6:13 PM