Cookware And The Usual Stuff 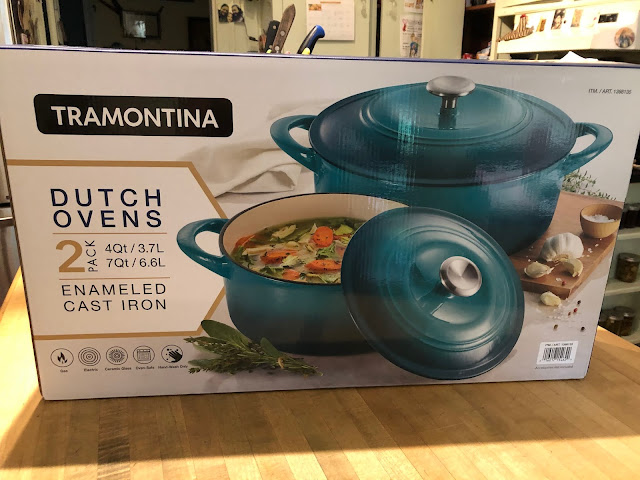 When I was in Costco last week I saw this set of enameled cast iron dutch ovens. They had two on display that I could pick up and examine and I was impressed with how heavy they were, how nicely they seemed to be made. I got those two Le Creuset pans for Christmas and I have loved them and used them many times a week. But I wanted (needed!) a smaller dutch oven than the one I have which is probably about seven quarts. And a new Le Creuset one of those runs right around three hundred plus dollars.
For this set of Tramontina (ever heard of them? I hadn't) enameled cast iron dutch ovens, Costco was asking the crazy price of $69.99.
That is a big difference.
But I didn't buy them.

When I went back today though, I saw them again and this time I stood there and I fondled them and I hefted them and googled them and ended up buying them. If they crack or chip or displease me in any way, Costco will take 'em back so what's the downside here? The reviews I've read vary from "piece of garbage" to "love it just as much as I love my Le Creuset."

You know what really got me?
The color. 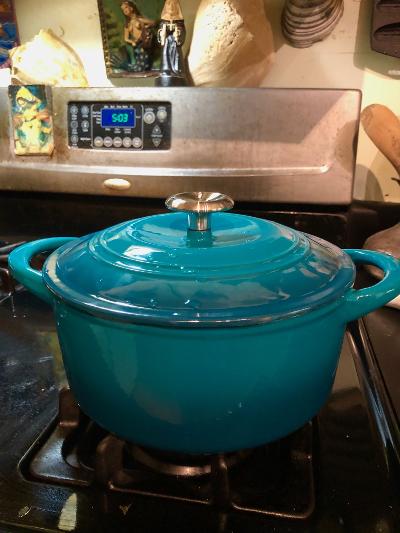 That picture doesn't even do it justice.
So. I'm going to cook our supper in it tonight and we shall see how it goes.
And that's about the most exciting thing that's happened to me in days. Weeks? Months?
I did the shopping and got to see Brenda whose eyes were a marvel of Mermaid Magical shine and shimmer. I told her, "You have the most beautiful eyes!" She's just a darling, that woman. I spent a completely inappropriate amount of time in Publix. I am not sure why but it was almost as if I'd entered some portal when I walked into the place and time lost its meaning and the day slowed and I moved as if in molasses or honey and had to find the mystical formula to escape.
Not sure what the mystical formula was. Perhaps my debit card's PIN. Who knows?
Not me. I did manage to get out though and am now home so I suppose I was just a slow shopper, trying to determine what sort of buttermilk I wanted and what other spice besides curry powder I wanted to buy to complete my McCormick's gourmet spice BOGO deal. These things take time, y'all.
Here's what the bananas looked like yesterday. 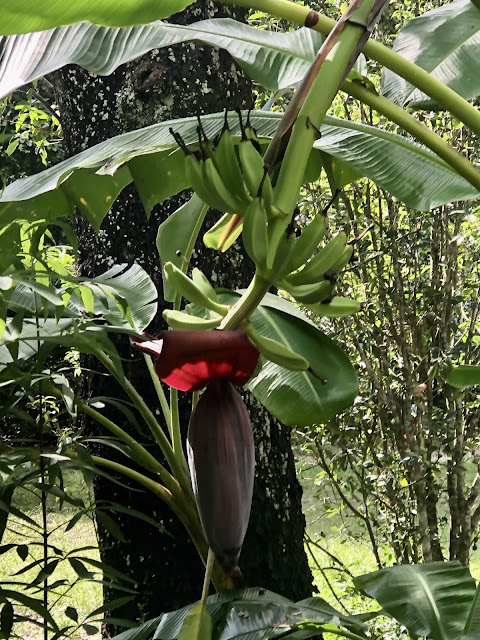 I love the way the sun is shining through the red petal. I guess it's a petal.
And here's a picture of chickens eating ice cream. 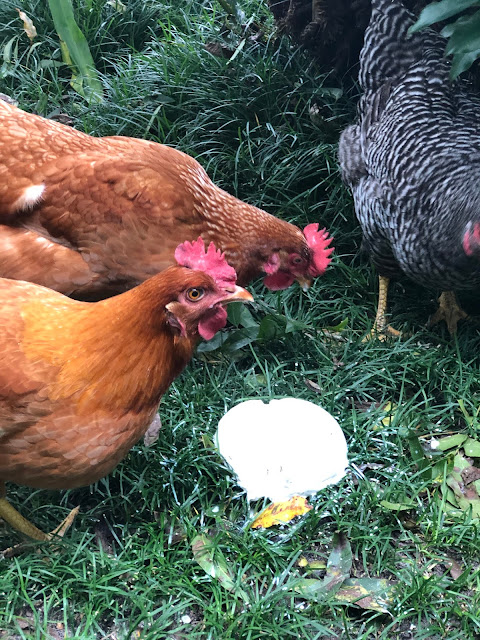 Mr. Moon bought some Bluebell ice cream a few weeks ago and after some dedicated sampling, we both decided it was not worth the calories. I'm not a huge ice-cream person but Mr. Moon is and even he was not happy with the stuff. A few nights ago he tried it once more and told me, "Get rid of it. I mean it."
So I did. And the chickens were happy. They also ate some stale cornbread today. It made me happy to think about eggs made of cornbread and ice cream.
Speaking of eggs, it was suggested yesterday that I take No Man Lord some eggs on my way to town today which I did. He wasn't anywhere in sight and I sort of hated trespassing onto his property but I stepped over the string he has tied from posts in his yard and took the eggs to the little table by the chair where he spends a great deal of his time. I left a note saying, "Eggs from a neighbor. FRESH!!"
I think he cooks on a fire. I hope he can eat them.
I realize I haven't read or listened to any news today. Since the world still appears to be stable enough, at least in Lloyd, I guess that we're still spinning around the sun and that gravity still exists. For right this second, that's all I need to know.
Happy Friday, y'all.
Love...Ms. Moon
Posted by Ms. Moon at 6:58 PM