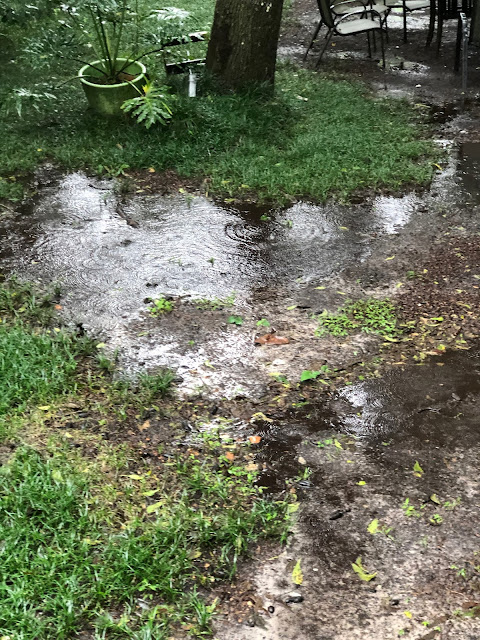 Well, as fires rage in the west, we here in North Florida are getting rain, rain, rain. That's what my back yard looked like earlier. The water has absorbed into the ground by now but it was coming done so fast that it puddled and pooled there for awhile.

We're dodging Hurricane Sally but getting some rain from it and an occasional gust of wind. 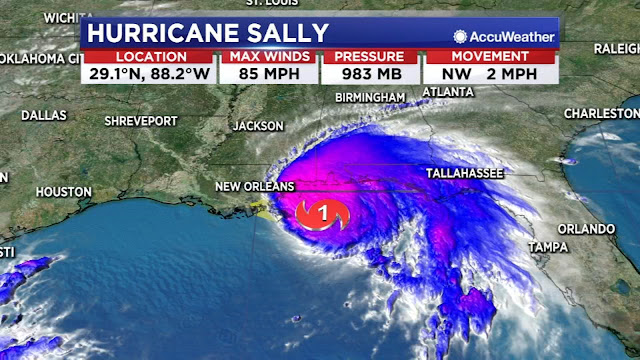 We are not entirely in the clear here. A friend of mine posted this on FB today. 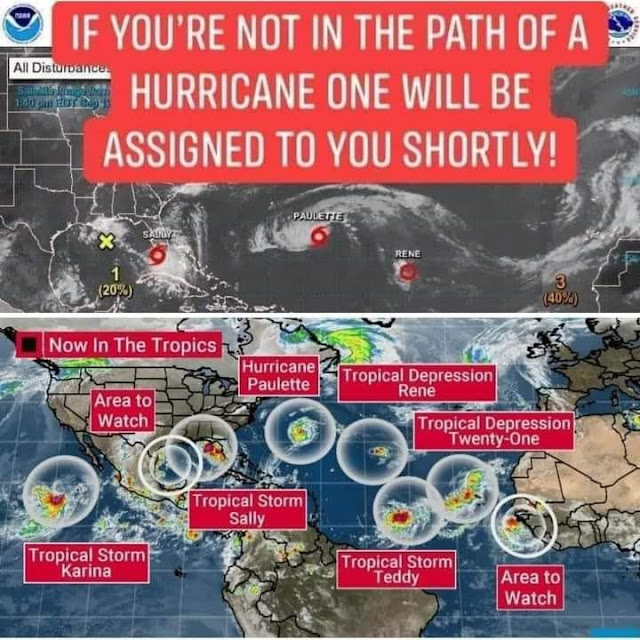 Haha!
And yet, even as part of the country is burning and storms are lining up in the Atlantic, Donald "I'm NOT a Scientist" Trump declared today that he thinks that science just doesn't really know why these things are happening.
Now. If he's referring to the things that are happening in his brain, he's probably right. They won't know until he's dead and they can open up that head and see what's inside it. I imagine it as looking somewhat like a pile of hamburger that's been infested with maggots.
I could be wrong.
It might look like a pile of hamburger that's been infested with roaches.
Sorry.
Sorry.
Not sorry.
On to something more cheerful. Here's my expanding bunch of bananas today. 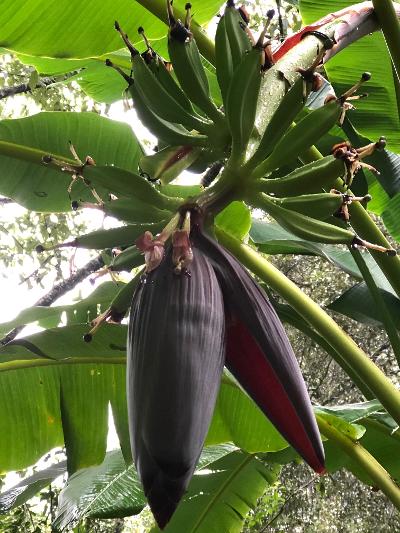 I have figured out that as each red petal separates from the bloom, another row of baby fruit is revealed. Why have I never noticed this before? I suppose because the only time it ever bloomed before this was last year and I just did not pay attention. This year, possibly due to the pandemic and my many, many hours staying at home (and days and months) I am noticing things that I've never noticed before. Anyway, isn't it cool to think that every banana you buy in the grocery store starts out like this?
Not much else going on. It was a nap day due to the rain and general ensuing ennui. Also a day to do a lot of laundry for some reason. The pesticide guy advised me to wash the cats' bedding which of course means our sheets and quilt because Jack beds down with us every night. I may not have a Kardashian ass but Jack seems to enjoy falling asleep beside it. Maurice makes do in other places, usually on the backs of sofas or chairs or on the table on the back porch and I washed that tablecloth. Mr. Moon reports finding only one flea on him today which is a huge improvement. We've given the cats another flea treatment and hopefully, things are under control here. I actually did a little tiny bit of clearing out in my bathroom, throwing away make-up that is almost as old as Jessie. Not all of it, by any means. I think about the last time I wore make-up which was when Lon and Lis played in Tallahassee right after Valentine's Day. I had bought a blue velvet dress online and it got here in time for me to wear to the gig and I wore that and sparkled my eyes with glittery eyeshadow and now it seems like a million, billion lifetimes ago.
Will we ever dress up again? Will we ever go out to hear music again? Will we ever hug longtime friends again without a thought for anyone's safety?
I do not know.
When was the last time you dressed up? I'm curious.
Love...Ms. Moon
Posted by Ms. Moon at 6:10 PM