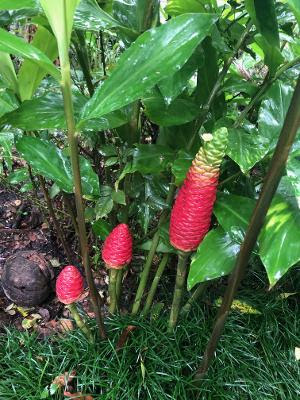 Pine cone lilies.
Lately my dreams have taken on a new story line. The crazy house where hoarders and museum directors obviously lived is still involved but the new twist is that I am given a newborn baby and am completely unprepared. The other night when I had my first dream in this genre, my main worry was that I could not breastfeed and I had no formula. There were other problems, one of which was that I had two other small children in my care and needed to bathe them all and despite the house having many, many bathrooms, none of them had been cleaned in decades (yet another task I needed to get to) and the tubs were especially atrocious. I mean, great giant chunks of something which could have been fungus. There was more but that's enough of that one.
The one I woke up to this morning involved another newborn and this time I managed to get to Target to buy the things I needed. A very helpful salesperson collected all of the items I asked for including little shirts and nightgowns, diapers, and blankets. When it came time to pay the bill, though, I was astounded at how much it all cost and looked through the items and realized that the "nice" Target lady had tried to upsell me by putting in fancy baby things like miniature yoga work-out wear instead of the plain cotton t-shirts I'd wanted. I threw a small fit and she exchanged those items. I was still worried about the formula situation and held the little baby the whole time this was going on, always afraid I was going to drop him.
I am not quite sure what all of this means. Perhaps it is nothing more than being a bit worried about Levon spending the night for the first time. If that IS the case, I am obviously far more concerned than I should be. But who knows? I find dreams to be sometimes very uncomfortable, sometimes very frustrating, sometimes even horrifying, but almost always quite interesting and sometimes even fascinating and they're probably all more of a product of the medications I'm on than anything else but my brain does have to pick out what it is I'm going to obsess about in my sleep. And I suppose that given the way my waking hours have become so very routine, so very similar day-to-day, the dreams appear even more colorful, more interesting, more of something to ponder.
Today was one of those routine days. I spent some time in the chicken coop. It has come to my attention that it has really become quite nasty. The coop is the outside part of the whole chicken arrangement which is fenced but not walled. The birds just walk about on dirt and of course they poop in there too and I'm sure I should have been doing something about that all these years but really haven't. So I got in there today and raked up the top layer (pun alert) of guano-earth and hauled it to the place where Mr. Moon keeps his composting stuff. That dirt is probably worth its weight in gold to a serious gardener. I had an old bag of pine shavings from when I used them in the bottom of my peep nursery bins and I spread that around the coop. The chickens are not sure about this. Some of them appear to be quite suspicious about the new carpet and may be waiting to see if the bold and the brave chickens go up in flames or something if they walk on it. 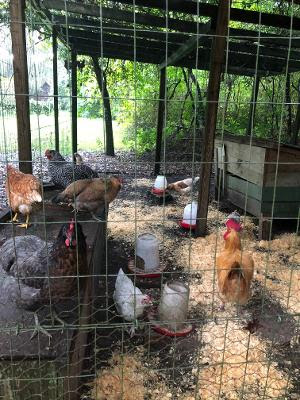 After I did the dirt thing I decided to do a little more clearing of the garden. I got down on my knees and weeded and we all know I love to weed if the truth be told but I do NOT love to weed when it's so hot and so muggy. It was okay when the sun went behind a cloud but when it shone down brightly, I dripped sweat.
And then the red ants found me or I found them.
And that was enough of THAT!
I came in, took off my clothes, threw everything in the washer and took a shower.
But you know what? We're not on fire here. It may feel hot as hell but we are not in the middle of hell which so much of the west coast is. It is impossible for me to imagine what that feels like, looks like, sounds like, smells like. If there is anything more terrifying than fire I don't know what it is. As much as I hate being in a hurricane, I would choose that any day over being threatened with fire. I can't even talk about it without feeling overwhelmed with a sense of panic. For those of you who are experiencing the effects of those fires, I wish you safety. Whatever that means- I wish it for you. And I so wish we could share some of the rain we've been getting here.
In fact, it rained again this afternoon and I sat at the sewing machine and made another mask, so carefully, so attentive to everything I was doing and was so proud of myself until I realized I'd sewed the little sleeve for the nose wire on the bottom instead of the top. A chin wire, I suppose. Oh well. I got out my beloved seam ripper and took care of business and have now moved the piece that you can adjust to make the fit better to the top where it belongs. I've got my field peas simmering with onions and some ham and will start my rice soon.
Jessie has sent me a few pictures of their time on Oak Island with Vergil's family. It looks so lovely. Here's August, playing cards with his Uncle Ben. 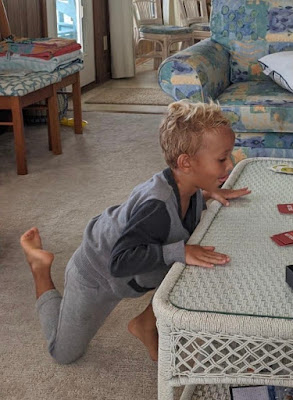 Look at that foot and those beautiful fingers. Do you think he's excited?
Here's another from today when it was raining so they got out the sidewalk chalk to decorate the concrete pad beneath the house where they're staying. 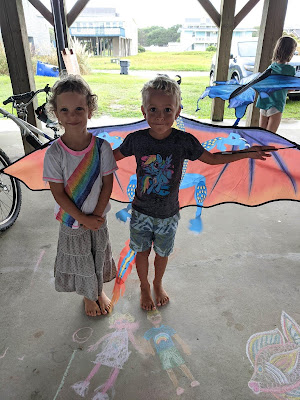 Can you tell they're related? I teared up when I saw this. What a magical and important time they're all having together. I know that part of my yearning for Vero Beach is related to Jessie and Vergil taking this trip to be with Vergil's family on the beach. When I was a child and we stayed in Vero, it was usually with my mother's brothers and their wives and children. Even though I was quite young when these vacations started, I remember. There was magic involved and not the least of it was that my mother seemed happy for once. She was with her beloved big brothers and I know that must have meant so much to her. There was a sense of safety and of connection in those visits with my cousins and aunts and uncles and grandparents all right there on the Atlantic together and there was always a pool and the ocean and the sand and the smell of suntan lotion (there was no sunscreen then- it was either Sea'n'Ski or Coppertone) and the days were endless and happy. My uncles were jolly and I, fatherless, fell in love with them.
So. Unlike my dreams, no real mystery there.
And I am so glad that August and Levon are at a beach with so many people who love them.
I guess that's about it.
Y'all be well.
Love...Ms. Moon
Posted by Ms. Moon at 6:34 PM