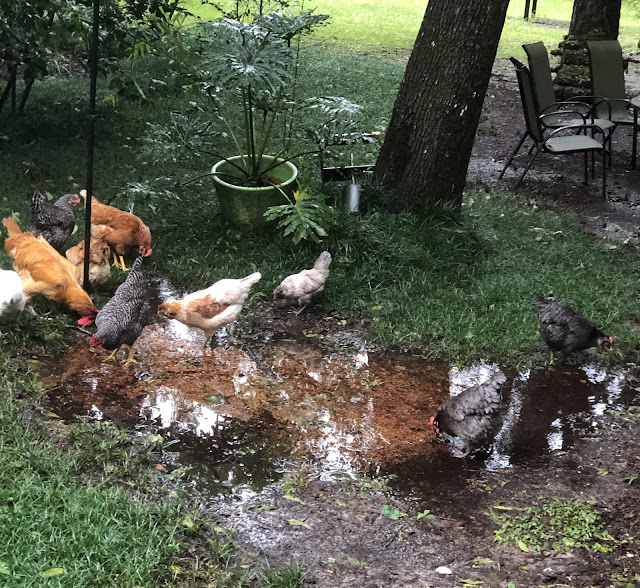 That was one of the pictures I took yesterday when we still had standing water in the yard. The chickens are actually eating the birdseed I'd thrown out. They did not seem to mind the fact that it was covered in water. Today the puddle is all gone and the chickens are still eating the birdseed, now swollen, I'm sure, for it's soaking. When Mr. Moon let them out this morning they ran to it first thing and began pecking away. The squirrels and cardinals have been happy to dine at that dirt table, too.
The rain seems to have moved on past us. I hear that that hundreds of thousands of people are without power in Alabama and probably Florida, too. Man, that was a wicked storm. We were so lucky. Even so, I spent some time today picking up limbs and branches that fell in the yard. I just looked at the National Hurricane Center's map and there's something that may turn into a tropical storm (or may not) down east of the Yucatan, but north of Cozumel, which is supposedly going to "meander" (that's a quote) in a north-easterly direction.
Sigh.
There's another storm, I believe it's already a hurricane, in the Atlantic and who knows where that will go? Its name is Teddy.
Well, never boring!
I see another woman has come forward to accuse Donald J. Trump of sexual assault, this time in 1997. How the hell many does this make now? And why does his base not care about this? I can think of a few reasons right off the top of my head that they would probably cite including "fake news" but mostly I believe it's because they are heavily invested in the patriarchy, even (especially?) the women and, well, you know- men just do these things.
And hey! What was she wearing?
The only thing I was accused of today was always giving August and Levon a treat when they leave my house to go home. Vergil's mama sent me a sweet picture of August and his cousin flying their Lego helicopters and said that she's been learning a lot about the Moons from August. According to him, I am very nice and yes, I give them treats and also, Boppy has "thousands of moneys" and spends it all on lawn mowers. Here's a picture that Jessie sent today of the kids playing in the house where they're staying. 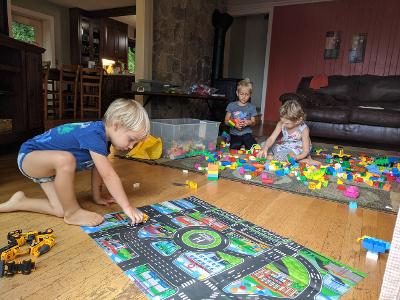 This is the same house that we all stayed in when Jessie got married. It is a huge house and belongs to the camp that Vergil's stepdad owns (I think) with other partners. When we'd been there for about four days, someone mentioned the pool table downstairs and I thought they were kidding. Turns out there wasn't just a pool table but also a ping-pong table and a foosball table too! I have such beautiful memories of staying there and the wedding. I'm so glad that Jessie and Vergil are getting to spend some time there now with their boys.
In other grandchild news, I hear that Magnolia has become a puzzle savant. Lily sent this picture today. 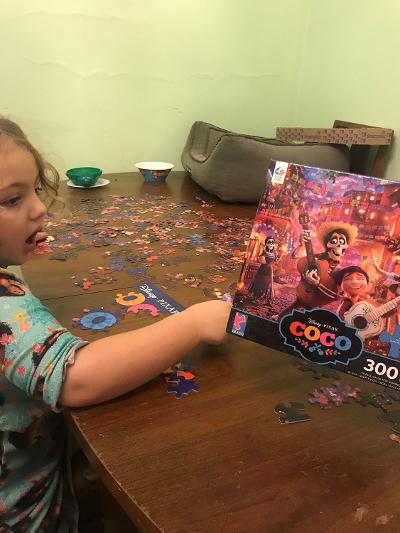 I will be honest with you- I can't do a three hundred piece jigsaw puzzle. My brain just does not work that way. Maggie has the most intense attention/interest span. Lily says she does puzzles for hours every day. She can also play with her dolls for hours. She is four years old! I am not sure where she gets this sort of focus. I am fascinated and astounded by it.
I made two more masks today. Not sure why. But they are nice, tidy masks. I didn't do much else. Watered the porch plants. Took the trash. Visited with a neighbor. Thankfully, she's as liberal as I am. So no, not the neighbor with the Trump sign in her yard.
I gathered eight eggs. What in the world am I going to do with all of these eggs? I need to start giving more away. I have a banana, blueberry bread pudding in the oven right now that I put four eggs in but that doesn't make a dent in the number of eggs I have in this house. Some are in cartons in the refrigerator, some are in bowls on the counter. Mr. Moon took a dozen and a half to the guys he's working with in the woods on the hunting project. I am so rich in eggs right now.
I think I'll go to town tomorrow for my Costco/Publix run. It's started being more of a necessity for me to leave Lloyd than it is for me to get groceries. And that really is the truth.
Have you guys seen any of the "First Time Reaction" Youtubes? If you haven't, you really should watch some of them. It's a young African American guy and sometimes his twin, watching videos of songs by artists they are completely unfamiliar with. I'm sure that their target audience has to be old people like me. I mean, who my age doesn't want to know what someone who's never even heard of the Mama's and the Papa's thinks about "California Dreaming?" And it's a chance to hear songs with new ears, too, as you watch the reaction of someone who is hearing the music we grew up on for the first time. It's a genius move.
I watched this one today. There's so much in it to love.
The guy literally believed that the Rolling Stones was either a clothing line or a film production company. Of course that blew my mind but I completely understand how that could happen. But he loved what he heard.
Enough already!
Love...Ms. Moon
Posted by Ms. Moon at 6:43 PM