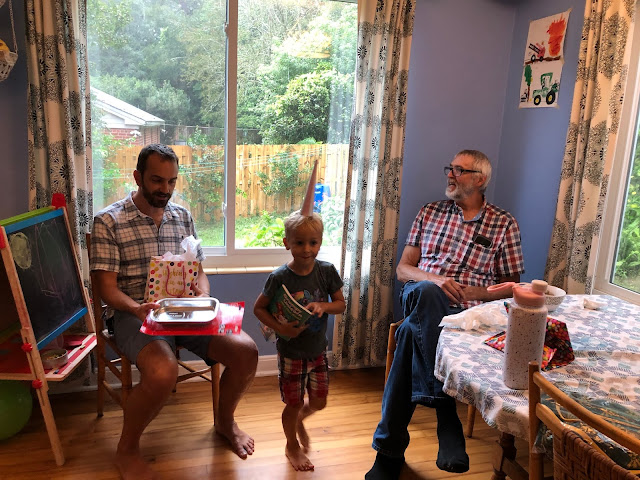 Well, today is actually Lily and Vergil's birthday and the big socially-distanced, outdoors party was postponed due to a constant steady rain but Lily and Jessie decided to throw caution to the winds and get the cousins together at Jessie's house to play and eat cupcakes.
And there were presents for all the children, even the ones who don't have birthdays this month.
Boppy was not exactly thrilled with this idea. We've been following every rule about distancing and masks and testing and, and, and...
But I wanted to take our presents over and see Lily on her birthday and see Owen, even though it was a day late, and when we got to the house, Glen reached for his mask and I didn't.
"Are you going to wear a mask?" he asked me.
I simply said, "No."

And he didn't either although he didn't hug or kiss. I snuck a few of those in though. I just can't not do it. I've broken.

It was so lovely. So sweet. When I gave Levon his present he somberly handed it back and asked if I would unwrap it for him and so we did it together. I gave him a construction machinery alphabet book and we read it. We gave August a beautifully illustrated book of classic fairy tales and a heart lamp which he had wanted. We gave Owen a Lego kit he'd asked for. 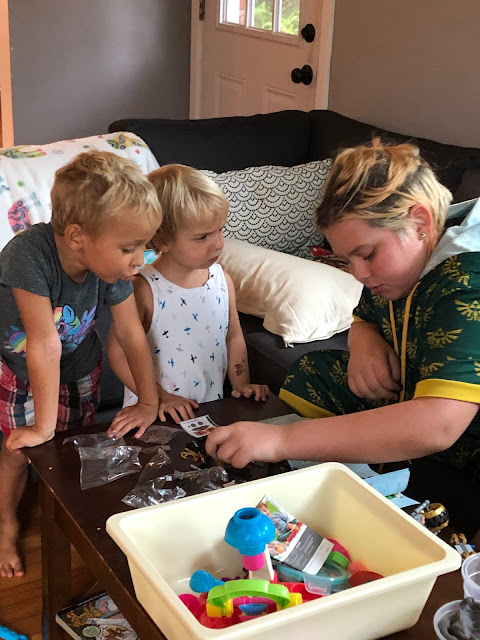 Owen was making a sort of whistling sound and Levon was studying him with great intensity. He wants to be a big boy so very, very much and Owen is a great teacher. 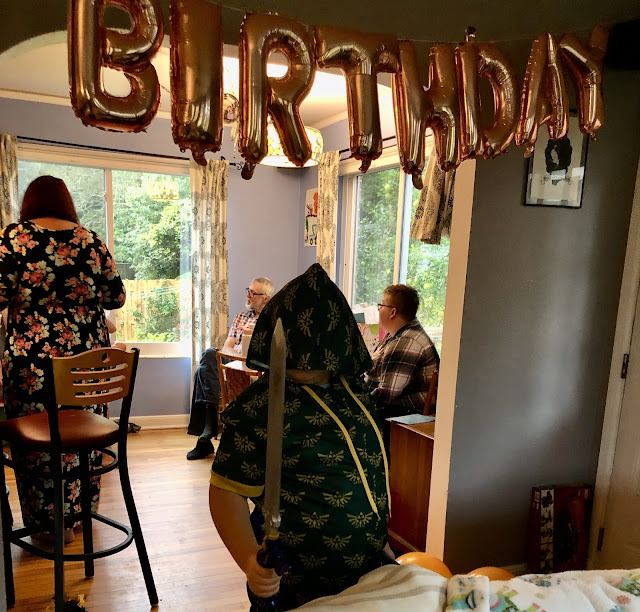 Gibson wanted the same kind of pajamas that Owen was wearing and so that's what we got him. I do not understand the significance of these pajamas. They have something to do with "Zelda." I'm pretty sure that is not in reference to F. Scott Fitzgerald's wife so I'm clueless. He'd also gotten that sword which also had deep significance to him. Sorry he had his hood over his face.
We gave Magnolia a Calico Critters house and some little Calico Critter mice to live in the house. This is the sort of thing that she will play with for hours and hours. Here's a beautiful picture of that girl that I took. 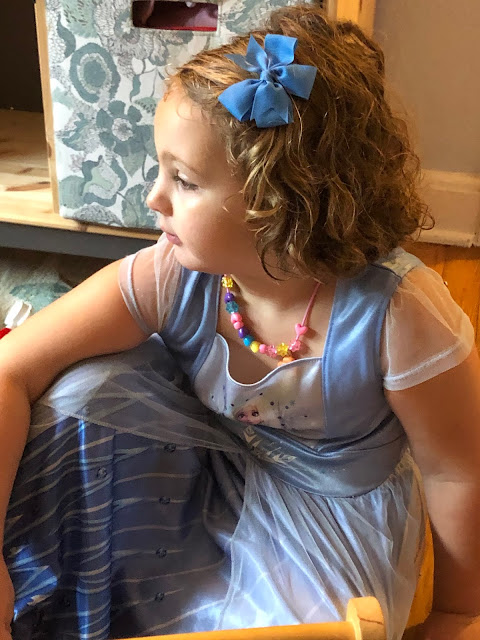 I swear- she is from another century. Her beauty astounds me.
And here is her beautiful mother, who I gave birth to thirty-five years ago today and her auntie too. 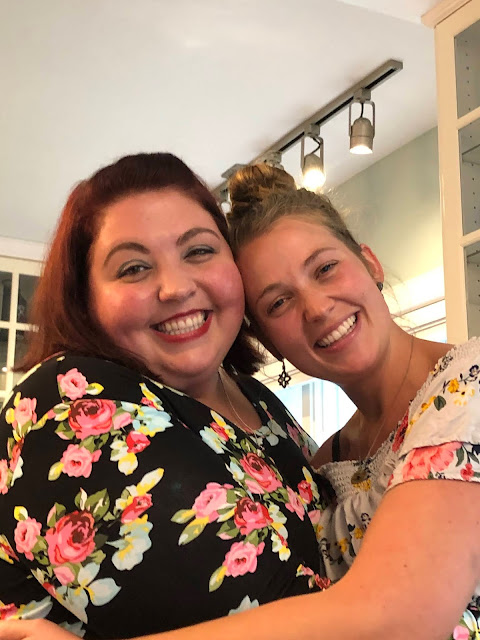 Jessie wanted a picture of her sweet little family. 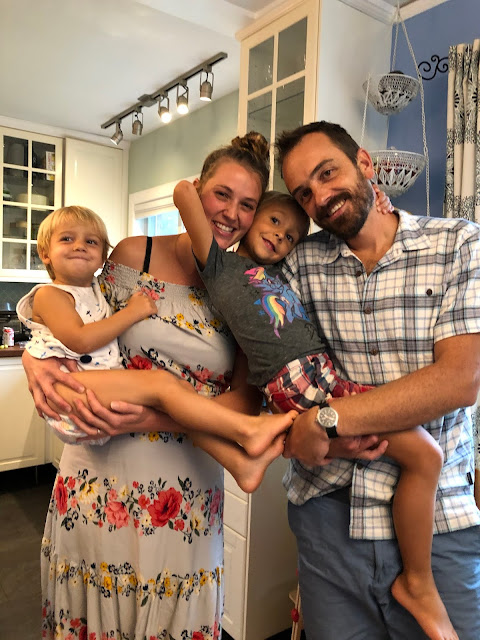 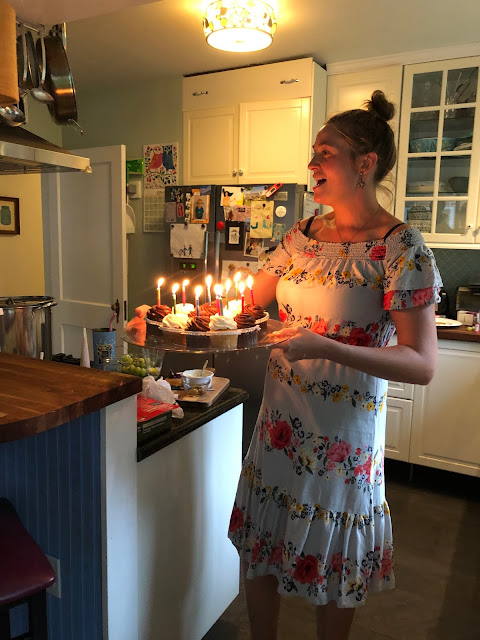 And an enthusiastic if not completely on-key Happy Birthday song. 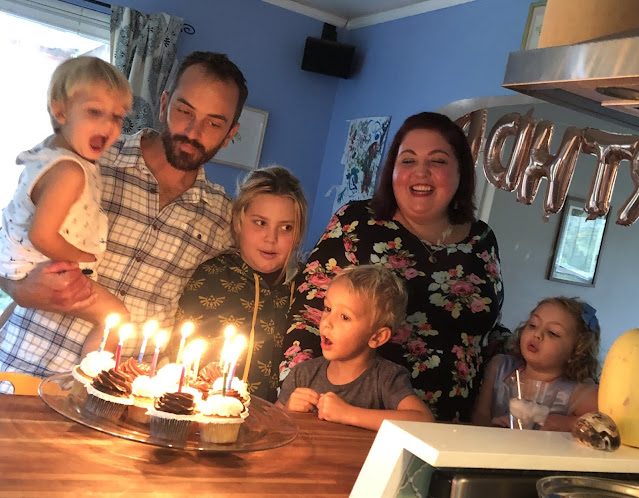 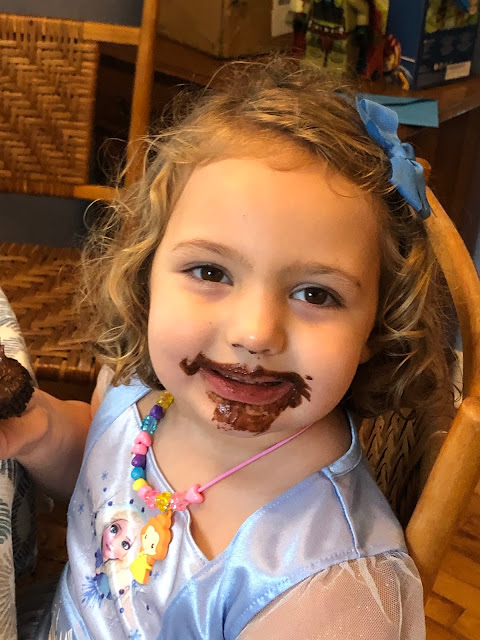 Princess Colonel Sanders Magnolia June.
We took our leave right after that and Gibson walked us out to the car carrying the bags I'd brought in one hand, his sword in the other. So gallant. I told him that he made me feel safe.
Westbound traffic on the interstate was stopped for miles. There were two wrecks about a quarter of a mile apart, emergency vehicles everywhere, two ambulances heading to the hospital in Tallahassee going full speed with lights and sirens flashing, one car flipped over on its roof.
If I hadn't already felt the incredible weight of fortune already, I certainly would have felt it then. I was already thinking about how ridiculously random it was for me to meet Glen Moon and for us to fall in love and have Lily and Jessie and for those daughters to grow up and have these beautiful children that can fill a house, fill our hearts so completely.
But here we are.
And if all of that was random, then what do we call the fact that he and I are still in love and so acutely aware of our fortune every day?
I don't know.
It is still raining, coming down steadily as it has been all day. The chickens gave us ten eggs today. Thirty-five years ago right now I was holding my baby girl Lily in my arms and staring at her with wonder, her father right beside us, Hank and May already falling in love with their new sister, Jessie still an undreamed light, waiting to join us.
Yeah.
Love...Ms. Moon
Posted by Ms. Moon at 6:30 PM