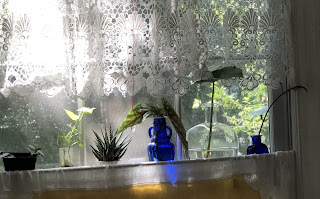 1. The font size gets all wonky no matter how you set it.
2. The pictures aren't the right size. (This could be my fault.)
3. Unless you do the shift-return thing, it's gonna double-space you. At least part of the time.
4. I guess that's all.

All righty then. Update on the jelly.
It's not jelly. It's not even syrup. And if I want to save any of the efforts  that have gone into picking, mashing, stirring, cooking, and sterilizing, I need to pour all of the purple juice from their jars, wash and re-sterilize the jars, and boil and boil and boil the purple juice with more Sure Jell and possibly more sugar and then pour it all back into jars when it has (hopefully) thickened and put them all back in the canner.
But why not? What else have I got to do?

Today's been a rough one for me. Feeling low and useless. My walk didn't help. Hanging clothes on the line didn't help. Watering plants in the garden didn't help. Sweeping and mopping (twice!) the kitchen and bathroom didn't help. The lingering smell of Fabuloso and white vinegar which I usually love isn't helping. I made a roux for gumbo. Not helping. I've got bread rising. Not helping. I gathered I don't even know how many eggs. No help whatsoever. I did the Monday Washington Post crossword in nine minutes. Guess what?
Didn't help.

This picture that Lily sent helps a little though. 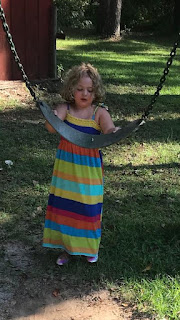 Magnolia is swinging her pet caterpillar. That girl may turn out to be the next Jane Goodall. Or maybe Steve Irwin. Only she won't get pierced in the heart by a sting ray. Just pierced in the heart by her love of animals.
And honestly, there's not a thing wrong. I mean, you know- besides a world-wide pandemic and the fact that our planet is literally burning up and also the fact that we have a president with the worst case of sociopathic narcissism the world has ever seen who is determined to wreck what's left of the earth (I mean, Nero may have fiddled while Rome burned but Trump plays golf while the world burns), become richer, get re-elected by any means necessary for four more years so that he can stay out of prison, destroy Democracy and become Emperor of the Universe and secret on-the-down-low lover of Putin. I'd say Kim Jong-un too, but rumor has it he's dead although I would not, at this point, rule out necrophilia as one of Trump's sexual proclivities.
Know what I mean?
To be honest, I have nothing to complain about. I may well be the luckiest woman in the world and we all know it. Not only do I have everything in the material world a person could want, I am rich in what really matters which is love. To give and to receive.
Hell, I even realized today that six weeks after a pretty damn severe accident, I am just about back to where I was before I fell.
And yet.
Some days are just hard. That's the way it is. That's being human. Some days the memories and the dreams and the state of the world and all of the realities of what has been and what could have been and the losses of the friends and the regrets that usually stay small just loom large.
Tomorrow will be better.
And I'm going to boil the hell out of that beauty berry juice and create something biscuit-worthy or know the reason why.
Maybe.
And here's something that makes my heart swell. 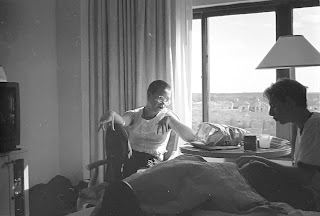 That's a picture of my May that her friend Django Bohren took when she was eighteen years old and a student at New College in Sarasota. Dear god, what a beauty. And you know what? She is every bit as beautiful now as she was then, only more so because of everything she's been through, everything she's learned and loved.
Everything's gonna be all right.
Love...Ms. Moon
Posted by Ms. Moon at 6:30 PM