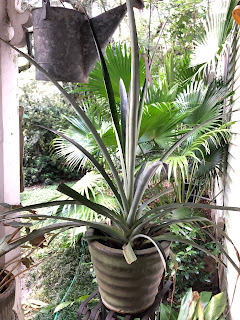 Well, there you go. That's your picture for today. I really, really need to get a life.
It's a pineapple plant that I grew from the top of a pineapple and in theory, it should grow a pineapple but as with everything in my world, or at least my yard, it does not get enough sun. Still, it makes a rather stunning potted plant, don't you think?
And that is my household tip of the day- buy a pineapple with the top on, cut off the top leaving about half an inch of the fruit attached, stick that sucker in some dirt and water it when you think about it or more frequently than that if you don't think about your plants very often.

Here's another tip of the day: do NOT make enchilada sauce with peppers, onions, chili powder, and garlic and then stick your finger in your eye.
You may think that this requires further explanation.
It does not.
Just don't do that.

I've seen my husband once today. That was when he came home to pick up some posthole diggers. He was gone before I woke up (don't worry, he informed me last night that he was going to leave early) and he left me a lovely sweet note and he did call me to report on his doings. He's at his new hunting place with two or three other guys, one in his seventies, and one in his eighties so he feels like the young'un of the group. They are doing something with deer stands and feeders and hell-if-I-know. But they are in the woods, they are doing woodsy things, and there was fried chicken for lunch so you know he's a happy, happy man.
He told me that the seventy-something year old guy told him that whatever the eighty-something year old guy says, you just do it. I believe the quote went something like, "There's only one way to do something and that's Odell's way."
So my husband is learning a little patience and also trying to learn how to make suggestions in such a way that Odell believes he came up with the idea in the first place.
As I said, he did come home for one red-hot second to pick up the posthole diggers and he came in and gave me a kiss and then was gone again. I hope he makes it back home for supper.

Speaking of red-hot, I just tasted the enchilada sauce and I may have put a little too much chili powder in it. Dang. No wonder my eye is scarlet.

I've had a normal day. I took a walk. I noticed that No Man Lord has added the word "Don't" to his All Lives Matter sign making it say, "Don't All Lives Matter?" He really does think about these things. I admire that in him. It was hot as hell out there today and walking was just this short of torturous. When I was getting close to home on my return, I saw the man who gets along in a powered wheel chair in his wheel chair, gunning it down the left side of the road followed closely by a friend of his on a bicycle. We waved and said, "Hey!" and I said, "How y'all doing?"
"Just trying to make it, baby. Just trying to make it," said the man in the wheelchair. He lives right across the street from No Man Lord but I do not know his name.
I can't tell you how much I love being called "Baby" by elderly gentlemen and I am not being sarcastic. I really do.

I hung the clothes on the line. Now isn't that exciting?
No. No it is not and I didn't even enjoy it that much because I was still hotter than Satan's armpit (that's more polite than what I usually say) from my walk. But hopefully the towels will smell better.
I went to take another picture of the hurricane lily but something ate it in the night. Or else it went back through the alien portal from which it came.
To my delight I found another hole in the old dress I'm patching, giving me another excuse to sit on the couch and do funky embroidery. So I did. I am still watching "The Office" but slowly...slowly...slowly. I do not want it to end. Of course, as all things must do, it will end eventually. One of these days I will probably look back fondly on the time when I was healing from my fall when I wore one of three dresses every day, wore my hair down because it was easy and didn't annoy me in the chair where I sat with a cat and pillows, and watched episode after episode of "The Office."
Who am I kidding? I already look back on that fondly. At least the part where the original agonizing pain had diminished. Now I have to have an excuse to sit and watch TV during the day. I guess being heat-stroked after a walk is excuse enough. Whatever.

OH! I forgot the big news! I ordered a new pair of walking shoes online. I hope they feel okay. They're Saucony's, which I have been wearing since 1980, so maybe. This is what the shoes I'm walking in now look like. 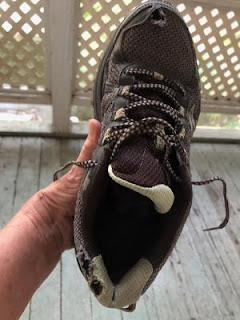 They're as shit beat as I feel most of the time. Plus, they've always been a half size too small. I have high hopes for the new ones.
And that's life in Lloyd today. We laughed, we cried, we stuck our finger in our eye.
We lived.
Love...Ms. Moon