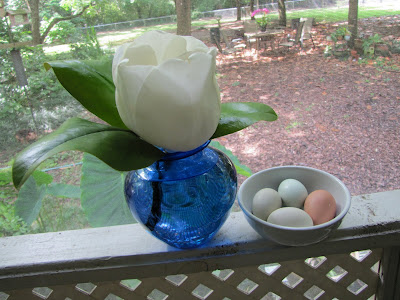 It continues to be a beautiful day here today although the light is less ethereal as the day goes on and has become more pragmatic. Can light be pragmatic? I think it can. It is doing its sunny job now, making the tomatoes come into their ripeness, providing the chickens with what they need on their feathers as they settle into their dirt baths and scratch about the yard.

I went to yoga and it was fine. I could tell it had been awhile since I've been and although that's mostly been MY fault, my yoga teacher has been out of commission a bit too, due to yet another injury. She is frailer than I am, my yoga teacher, although she is also strong in some ways. She seems to be one of those people who are prone to back problems and I can sympathize but never having been there myself, except for one tiny back-spasm incident which only lasted a few weeks, I can't really empathize. I think she lives in a lot of pain and I know that many people do and although I have just enough in my hips and knees to remind me of my age, I know it is not the same as chronic unremitting pain and I am so grateful that I do not have to live with that.

When I came home, I did go out and take a walk. It was lovely and I didn't die of the heat and while I was walking I was thinking about how I used to walk so very, very regularly and how one of the things which was a factor in the slow decrease I've had in the last year or so was, quite oddly, going to a counselor.
It was when I was trying to get myself back together after my bout of insanity two years ago (was it only two?) and on the advice of several people, I went to see this woman.
She was beautiful. Possibly older than me but completely and utterly beautiful for any age. She had the body a twenty-five year old would be proud to have. And you could tell that appearance was very important to her. Her clothes and shoes and make-up were all perfect and I feel quite sure she does not find clothes or shoes like that in Tallahassee. I can see trips to Atlanta or New York for shopping. And she obviously works out a lot.
So anyway, she asked me about my exercise habits and I told her that I walked for about forty-five minutes at least four times a week and went to yoga three times a week and that I did some weight things at home and crunches- regular stuff you do on your living room floor. She was impressed but said that studies showed that for the type of anxiety I had been experiencing, regular aerobic exercise, six days a week, lasting at least an hour and fifteen minutes was most effective.
Well.
And I tried. But somehow, that extra half hour, those extra two days a week just wore me out. And of course I didn't slow down any to make that extra half hour any easier. And I started dreading my walks instead of them just being a part of my day. And when I didn't have an hour and fifteen minutes to walk, I just didn't go instead of just walking for as long as I had the time for.
And I eventually quit going to the counselor and my walks got fewer and fewer as I felt more and more guilty.
Which I think is a good lesson to remember- we do what we can and if we enjoy what we do, or at least if what we do is workable for us, we'll keep doing it.
Making unreasonable goals and trying to keep them is self-defeating.

I am going to remember that now. And take my forty-five minute walks, or half-hour ones if that's all I can do. I walk VERY fast and I get every minute's worth out of what I do. I do not lollygag around, believe me.

So I came home from that walk and on my way I picked a magnolia and then went to the chicken coop and found those four nice eggs, one of them obviously from Daffodil because it is such a lovely color of blue and she is the only one who lays me blue eggs, and I put the magnolia in a blue vase and the eggs in a white bowl and there you are- those are the things I have gathered today, along with a sense of some order being restored in my life which is, after all, my own life and ultimately, I am the one who needs to set my own goals, no matter what studies may show.
Posted by Ms. Moon at 11:46 AM