My Babies (And Spider Picture Warning) 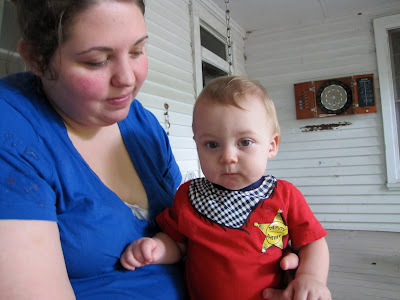 Well, it had to happen.
Owen is sick for the first time. I had thought he felt a bit warm yesterday and was fussier than usual and he wouldn't let me put him down when he was asleep but he full-bloomed it last night as babies do. His temperature shot up and he cried and cried and fussed and couldn't sleep and didn't want his nurnies and scared his mama and daddy.
Lily did all the right things. She gave him his ibuprofen and got out the Dr. Spock who is always on call, always reassuring at three a.m. On his advice she gave him a tepid bath and when he fell asleep sitting up in it, she was more worried than ever but they got through that long night and this morning I went to see the pediatrician with her and Owen.
Upper respiratory infection, probably viral. His ears are clear and so are his lungs so that is good. He isn't vomiting or coughing very much he's just a little pitiful and not his happy, singing self.

I asked Lily if she wanted to come out here with him this afternoon so that I could take care of both of them and let her rest some and she said that would be nice, so they are both here, taking a nap right now. She felt guilty about not going in to work but she knows that he needs his mama today because no one can get him to sleep and rest the way she can.
We have some movies to watch later and honestly, except for Owen being miserable, I'm as happy and content as I can be. As I just wrote in an e-mail to a friend, I would have made a horrible nurse- I am too scatterbrained and probably would have killed someone by accident, but when it comes to nurturing and caring for my loved ones in simple ways, I am not so bad and there is a part of me which loves the fact that my children might still need their mama sometimes and will let me take care of them. They don't realize that it's a mitzvah for me when they let me tend to them now and then.

So here we are, back in Lloyd with our sick boy. He's a sturdy one and will be fine. And so will Lily. She had a taste of another side of being a mother last night and it's a frightening one. A child or a baby with fever can just scare the bejesus out of you and that's a fact. The listlessness, the burning feel of their skin and the way it becomes so dry feeling, that cry you've never heard before, their refusal of the breast or the bottle- it's just plain scary, and scary at three in the morning can turn into terrifying.
But I am so proud of Lily and the way she did everything just right. She loves that boy so. And he can still smile. My usual tricks are not giving him the chortles but his happy nature is still in there. 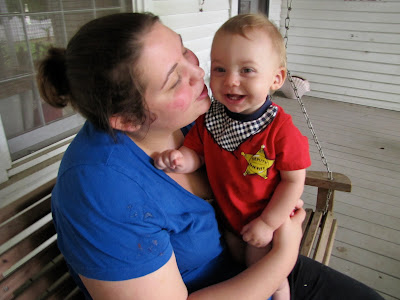 My little sheriff and his beautiful mommy.

And now, just because I can, I'll give you this picture of a small spider which has built her web on the swing porch: 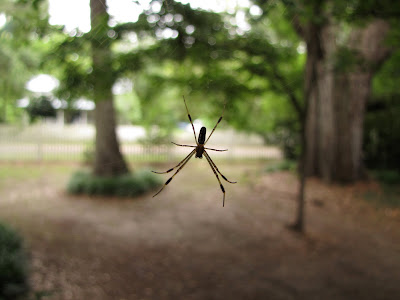 And look! My zinnias are coming up! 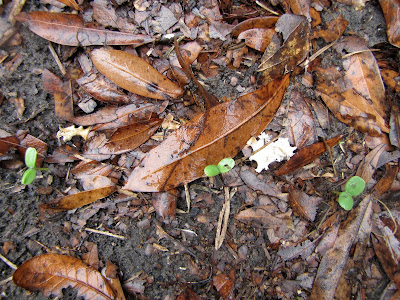 The chickens did not scratch all of them out.

And that's it from Lloyd on this Friday afternoon. It is hot and muggy but that's to be expected and it's the beginning of a long weekend and I hope that all of us have a good and safe one with our families or our critters or in the dirt or by the water or under a tree. Whatever it is that you want to do this weekend- enjoy it.
Let us all take care.