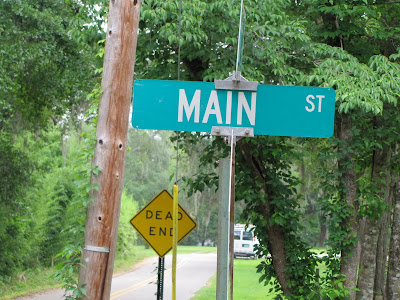 I got a phone call yesterday from the unofficial matriarch of Lloyd. She is an eighty-something year old woman who lives across the street from me, catty-cornered, with her son and his wife and their five children. I understand that she takes her meals with her daughter who lives next door to her and who lives alone.

This woman has lived in Lloyd for most of her life. She is the descendant of the first white people to live here. She may have (I get confused about this) grown up in this very house and I know she raised her children here. I have heard tales of the boys peeing out the upstairs windows. There is no bathroom upstairs and knowing boys as I do, this story does not shock or surprise me one bit.

I need a name for this woman. Hmmmm. I think I shall call her Ms. Lloyd which is NOT her name. But it will serve for our purposes.

Anyway, Ms. Lloyd called me yesterday to remind me of the meeting which is going to be held tonight down at the Woman's Club which is no longer used as a Woman's Club but which is used for AA meetings. The meeting Ms. Lloyd was reminding me about is the yearly meeting of the Lloyd Preservation Trust. I have been to perhaps three of these annual meetings and I have no desire to go to the one tonight. None. But dammit, don't you know I told Ms. Lloyd I would? And that I would try and get Ms. Fleur to come as well?
(Ms. Fleur- the meeting's at seven. Call me.)

The first meeting I went to was attended by Ms. Lloyd, her son, her daughter-in-law, some of their children, her daughter, and a few others.
The next year's meeting was attended by Ms. Lloyd, her daughter, and a few others.
Same with the last meeting I went to.
She can't even corral her son to come to these meetings! That's how pointless they are.
The agenda is always the same. Ms. Lloyd wants us to come up with ideas on how to raise money to restore the old store. The old store is a building on Main Street which was...the store...when Ms. Lloyd was growing up.
And because of Ms. Lloyd's efforts, along with a few others who have worked with her on this project, the store is now mainly...restored. 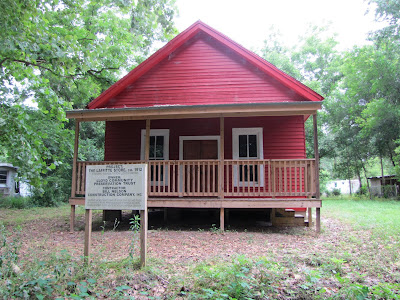 Restored in that it has been patched and painted and new doors a front porch have been affixed to it.
Grants were acquired for this project. What to me seems like a fairly obscene amount of money was used in this project.
And fine. If there is money out there for this sort of thing, then why not?
But here's the problem: the store is a fairly small, very plain building. One room. There is no electricity in it. There is no running water in it. There is no bathroom in it.
Which leads to the fact that there is no earthly use in modern day life for The Store.
And so it sits, its coat of red paint shining like a false beacon, mostly empty and locked. 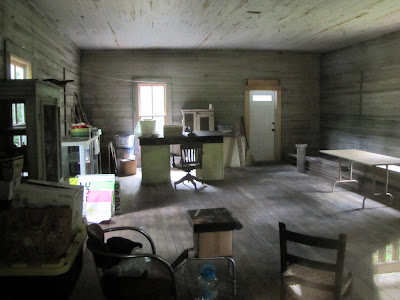 I think it needs a new roof.

And tonight's meeting will be about The Store. As it has been for six years now. Seven. Whatever. And probably back twenty more if the truth be known.
We will discuss The Store and what it could be used for. An unheated, unairconditioned old barn of a building with no bathroom and no lights in it.

Poor Ms. Lloyd. She wants the sense of community that Lloyd held when she was young. I understand that. But Lloyd is no longer a bustling village. The train does not stop at the depot any more. There is no hotel which sells fried chicken dinners. There is no school or library and the Woman's Club is used to hold twice-a-week AA meetings in. Even the corner store which was open when I moved here and where you could at least buy beer and milk is closed now. 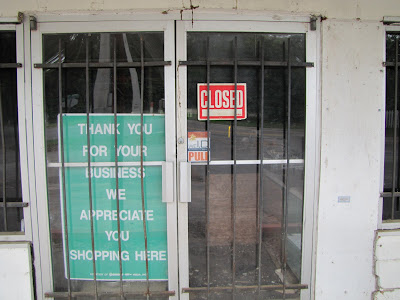 We do have a post office, of course.
And a truck stop. With a Subway.
And a lot of churches.

And that is it.

But Ms. Lloyd will not and can not give up on the idea that we can become something again. I am not sure what that something is, but she isn't giving up. She always suggests a parade and that we grill hamburgers and hot dogs to sell to raise money. Her daughter always patiently reminds her that when they last had a parade, there was no one to watch it because everyone who was interested was in it. And the last time we (her daughter, actually) grilled hamburgers and hot dogs to sell, we (her daughter) lost money on it. I think some money may actually have been raised with a yard sale. I am not sure.

There will be talk of the sign which another neighbor has been working on for at least six years that I know of which says, "Welcome to Lloyd!" or something like that. There may be talk of finishing the restoration of the train depot where the post office is. 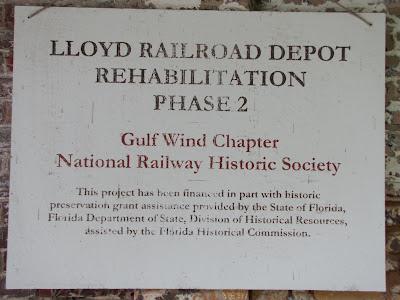 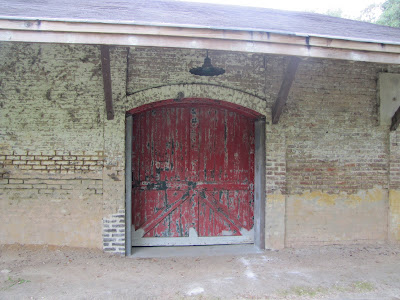 As far as I know there are no concrete plans as to what that part of the building would be used for once finished either. But at least there is plumbing there and electricity.

"How can we get people involved?" Ms. Lloyd will cry out. And everyone at the meeting will look down at the table where the AA literature is scattered and we won't know what to say because obviously, if we were the sort of people who got involved, we wouldn't be living in Lloyd.

I had the idea that perhaps we could have a growers/farmers market once a month in the little area by the post office but I am afraid to bring this up because Ms. Lloyd will insist that I be the one to figure out how to do that and as we all know, I can't stand to make phone calls and besides that, I don't have TIME. It's actually not a bad idea and I would love it if one were organized but I AM NOT GOING TO BE THE ONE TO GET IT GOING! So I'll probably keep my mouth shut.

Ah lah. Poor Ms. Lloyd. She who remembers the glory days of Lloyd when the train did stop and there were fried chicken dinners and people visited each other and cared about the community and before crack and meth were invented. When people met each other at the store where they went to buy coffee and sugar and nuts and bolts and nails and hell, I don't know, calico to make bonnets with. She will try with all her might to rally us tonight, the four or five of us sitting around that table. She will refer to me and Ms. Fleur (call me, honey!) as the "young people." Fifty-five years old and I am one of the "young people."

And I am not making fun of Ms. Lloyd. I understand completely her longing to see the things which were part of her community so many years ago restored and for that very community to thrive again. But...
Until Jefferson County has schools fit to send our children to, we are going to remain as a very small rural bend in the road, populated by a vastly diverse group of people who really don't have much in common and who get in their cars and drive to Monticello or Tallahassee to shop and go to events and to libraries and to eat in restaurants. That is just the truth of it.
And although the store really is a cool old building, there can be no use for it until another gozillion dollars have been raised to put in lights and water. There is a handicapped ramp, which cracks me up because what would a person in a wheelchair find to do in the store once entry had been gained? Or a person who could use the steps for that matter?

I love my little community here in Lloyd but it is things like the trees and the blackberry bushes and the tiny hidden graveyard in the woods which make me love it so. 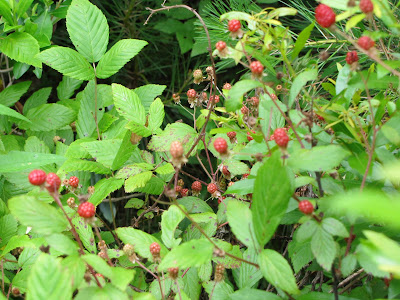 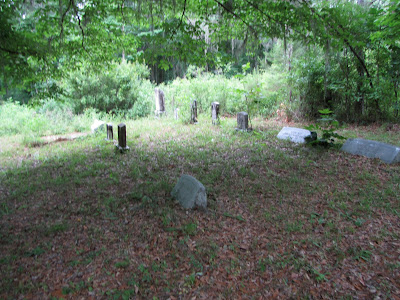 And it is the people whom I see on my walks and in the post office. As I was going in today to get my mail, a woman was coming out. She stuck out her hand and introduced herself to me because she teaches horseback riding at the farm which I walk by almost every day and she recognized me. THAT is Lloyd to me. And Ms. Liola who comes out of her trailer house to talk to me when I am on my walk. And Willie who has one leg. And my neighbors. And the gay guy who lives a mile down the road on the county line who flies not one, not two, but THREE rainbow flags from his front yard.

Ah well. I'll go to the meeting tonight. I wonder if there will be cookies. There were cookies one year and I keep hoping there will be cookies every year. Sadly, there are usually not.
I will take my checkbook and I will pay my family dues to the Trust and I will sit and listen as Ms. Lloyd tries to raise the few people who will be there to action. I will not volunteer to do anything, most likely. And it will make me sad that this woman's spirit is being crushed once again by the silence in that room, by the way every suggestion she makes is struck down.
I love her for her spirit. I love listening to the stories she tells of the way Lloyd once was. I love the pictures she has shown me of my house in the olden days.

I will be one of the young people. I will be a disappointment to Ms. Lloyd as I am every year, whether I attend the meeting or not.
And then I will walk home and admire the blooming cactus at Mr. Kinsey's house and I will wonder what is to happen to the church and I will look at the light of the setting sun in the oak trees which were here even before Ms. Lloyd, even before The Store, even before Lloyd was Lloyd at all and I don't think they care one bit whether the store is restored or whether the depot is rebricked or whether there is a farmer's market in the space by the post office.
No. They just stand and reach their moss-draped limbs to heaven and watch with an uninvolved eye at the foolishness of such short-lived busy creatures, always scurrying around in futile attempts at some sort of immortality or something.

And that is life here in Lloyd, Florida, today, May 25th, 2010 where some of us are completely content just to take it all as it is, eyesores and blackberry bushes, oak trees and trashy trailers, heat and humidity and hidden graveyards and do not have the energy to try and bring back what once was.

Not even for a strong, sweet woman like Ms. Lloyd to whom we are all a grave disappointment.