A Day Of Practically Sheer Perfection 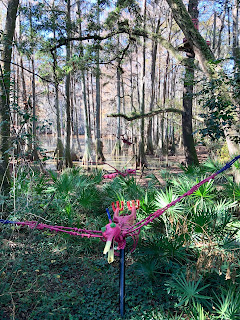 Oh my Lord! What a day!
I drove over to Lily's this morning and she and the kids rode with me to the Junior Museum to meet Jessie and August and Levon and Vergil and Vergil's sister and her husband and their three kids and Vergil's daddy and stepmama.
It was a perfectly beautiful day, cool and sunny and crisp and I've never seen the lake and cypress trees look more beautiful and goodness knows I've been going to the Junior for thirty years. I've never been with that many children at once except for when I was on field trips with the kids' schools and it was a bit like herding cats but no one got lost or separated and no one fell into the bear enclosure. I did have to tell Owen to get his jacket sleeve away from the vulture but that wasn't such a big deal.
We petted a beautiful big rat snake and I even held her. I was thrilled! Now why is it that at the Junior I'll hold a snake and love it but if I find one in my hen house I lose my mind?
Silly.
We saw fox and deer and a bear and wolves and a Florida panther playing soccer with a shiny bright tin can. We saw owls and sleeping otters and the vulture and a bobcat. We smelled the skunks. I don't even know what all we saw but it was beautiful, watching them go about their business in their own animal habitats with the fences keeping us out. Mostly they have animals which they are rehabilitating so I don't feel too bad about it all. I know they return the ones they can to the wild and keep the ones who can't be returned safe for the rest of their lives.
I would have gone for the cypress trees alone. 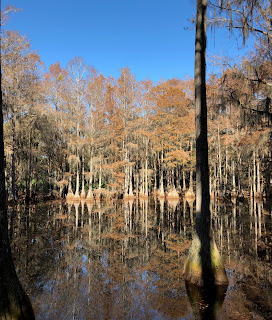 I started calling Vergil the Snack Daddy because he would announce, "Snack time! Line up if you want snacks!" and out of his backpack he would pull nuts and apples and pretzels. 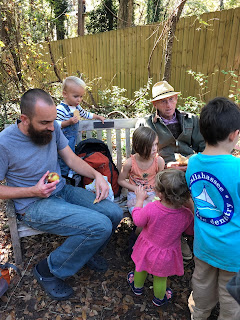 We visited the pioneer farm which I love every bit of from the cow and the pig and the geese which caused Maggie to burst into laughter every time they honked, to the big syrup boiling kettle and the blacksmithing place to the old cracker house which is truly my favorite. 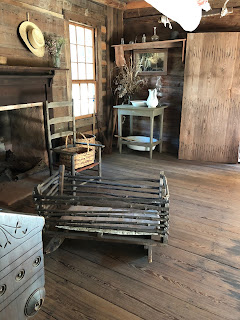 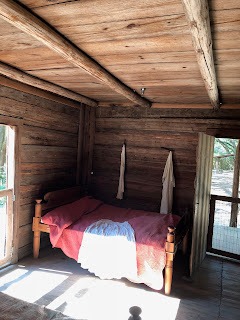 I think I could live in that house and truthfully, I did live in a house very much like it once. It had electricity but no plumbing. I pumped my water from an iron pump out back and we had an outhouse. I'm sure I've said that here fifty times but honestly, I think it is one of the best things I ever did. In some ways, I loved that house with all of my heart. You could see the ground through the floor boards but it still managed to contain life in a way that I'd certainly never felt before and I learned an awful lot about life and what's important in the year that I lived there with my first baby and my then-husband.

Moving on.
The old caboose was explored and then the old schoolhouse and the old church. 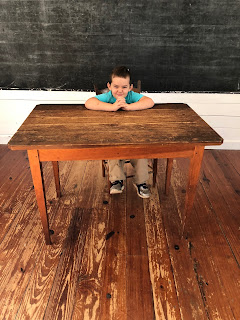 In the school house, Gibson wanted to be the teacher and sat himself at the teacher's desk. Some more people came in as he was sitting there, about to begin a lecture, and a little girl said to him, "I'm not going to do a thing you tell me to!" And then proceeded to sit down at a desk and listen.
And then Gibson gave a little lesson about fire, the point being that it can burn you. Everyone agreed that he's a natural lecturer. 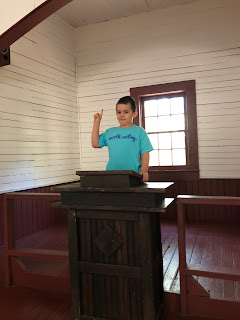 In the church he took the pulpit, of course, and proceeded to preach. I told him to say, "Love one another," which he did, and then he was going to start preaching about Donald Trump and aliens but before he could really get started with that, I sort of discouraged him. He couldn't remember Trump's name but asked, "Who's that terrible president?" 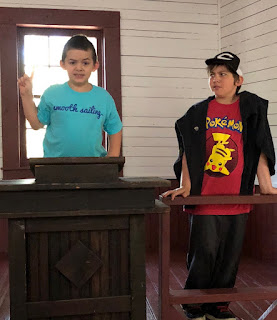 Owen is not exactly sure about the sermon.

We ended up our time at the Junior with a group shot. Here are all the kids except for Owen (who is getting a bit old to want to be included with little kids and Levon who was wrapped up and cozied on his mama's chest. 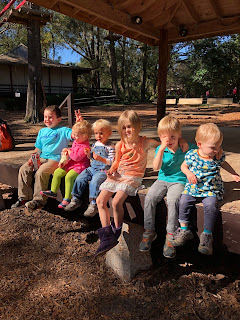 To follow up a perfect day with even more perfection, we then went to a PIZZA BUFFET!!!!!
I am not even kidding you.

And since I started writing this, Jason and Owen and Gibson have come over because Jason and Owen shot a trophy buck from the deer stand that Boppy built and put up at the back of Lily and Jason's property and all of the deer cleaning stuff is over here in our garage (I pretend none of this is happening, you understand) and Boppy was so excited that he could have died and so were Owen and Jason and then Boppy left for a basketball game and I have handed out snacks and made ramen noodles for the boys and drunk most of a martini.

I will leave you with a Gibson story. It goes like this:

We were on our way to the museum in my car and we were discussing teeth as Gibson has recently lost one, as you may know. Owen was musing about what the tooth fairy does with all of those teeth she collects and then we started talking about the fact that you can't marry your relatives. Gibson announced that he was never going to marry anyone in his family and Lily and I told him that this was probably a very good idea and, being Mer Mer, the wise and knowing old crone of the family, I said, "You know Gibson, some day you will meet a person and your heart will say, 'I don't know why but I think that this is the person I am going to marry.'"

Gibson pondered this for a moment and then he said, "I hope my tooth grows back first."

Oh my dear god. I love that child.

Happy Friday From the Almost-Pioneer-Almost-Farm in Lloyd, Florida.