Smart Stuff And The People Not Smart Enough To Operate It

My email is all wacky so forget pictures today. I am sure there is some way to get them from the cloud or, the iCloud, to be exact but I don't know how.
I did just help set up a smart TV and we would have been smart not to buy it because the picture isn't even as good as the one on our old TV which weighs four thousand pounds and just seems so old fashioned but of course, we couldn't even do all the functions it offers.
Technology is pulling ahead of us by miles these days and when I say "us" I mean Mr. Moon and me. We got poor Vergil to come over and help with the TV set-up and he also brought his vacuum sealer for the summer sausages. And his son, August, who had a good time fooling around with toys and tools and eating some mac cheese and apples with peanut butter. As they pulled away in the twilight to go home to Mama and Brother, I thought, "Oh Jesus. Poor Vergil. We're pushing him into the sandwich generation, taking care of kids and old people both."

So the four thousand pound old TV is sitting in the hallway like some giant, lurking, extinct animal and I don't know what we're going to do with it. Mr. Moon is talking about putting it in our bedroom to replace the small TV in there but we don't turn that thing on from one year to the next. Mostly it's used to watch VCR tapes (yes, really) with the boys. We have about half the movies Disney ever made before 1987. Our DVD and Blue Ray player doesn't work but the VCR still does!

And so it goes, again and again and our smart stuff makes us feel stupid, especially us older people, but I got to see Maggie and August and Levon today and although they make me feel old, they don't make me feel stupid. At the Costco today I told Maggie, "I just don't even know which grandbaby to kiss!" and if that isn't a good problem to have, I don't know what is.
I ended up kissing all of them just about as much as they would tolerate and I also got to eat some August toes because he thinks that's hysterical.
"Again!" he says, when I've eaten about forty toes and he pushes his little foot up for me to take some more monster nibbles from them. I have a feeling he'd let me chomp on his toes for hours had I the patience and stamina.

Well, that's about all the news from here. The moon is rising, the new TV is flatscreening itself in the Glen Den and a basketball game is about to come on. Guess I better make some supper.

Wait! I just got my email back. Here's Ms. Maggie at Costco. 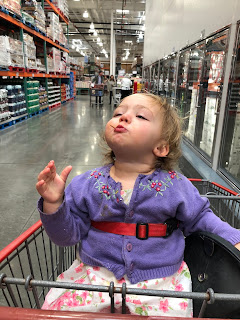 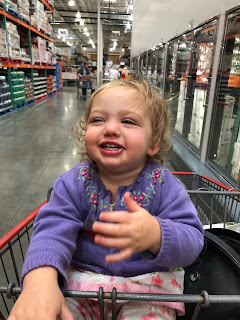 And here's August at Mer's. 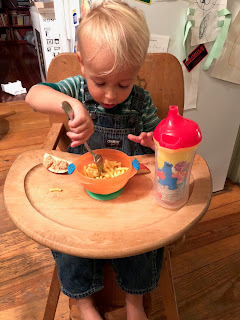 Let's chat again tomorrow, shall we?