I had to, absolutely HAD to go see the Weatherford boys today. It had been two days since I'd seen Levon, and days and days since I'd seen August, not to mention that today is Levon's one week birthday.
Can you believe that? He is a week old!
Practically ready to get a job!

When I got to Jessie and Vergil's house, Vergil and August were down in the basement putting a piece of Ikea furniture together. August showed me all of the tools they'd been using and he was very excited about this project. There is nothing in the world August loves as much as he loves tools. He's just a born tool-using fool, I tell you. Jessie and I were going to take Levon to the breastfeeding group meeting mostly for her to weigh the lad and see if he'd regained his birth weight yet and August was going to stay with his daddy but he seemed to be pretty excited that I was around and said, "Come too?" and so we put his shoes and his sweater on and took him with us. I'm not sure that he was glad he'd come. 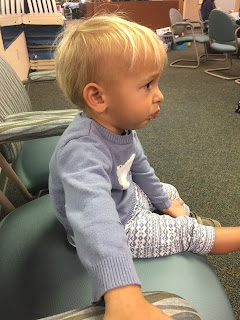 The large room was absolutely filled with mamas and babies as they had a speaker today. She was talking mostly about "tummy time" and as she spoke, I couldn't help but wonder how my children ever learned to walk or talk or even use their opposable thumbs without me having had all of this information. Some of the babies were crying a little because that's what babies do and August seemed to be mind-blown and concerned to see this many small creatures who resembled his brother in looks and in sound.
"Babies doing?" he asked me about fifty times.
"Mama's doing?" he asked me about seventy five times.
"Who lady? She doing?"
And so forth.
And then when Jessie undressed Levon and went to weigh him, his concern grew even deeper.
"Mama doing? Levon doing?"
I offered to carry him over to the scale too to see exactly what mama and Levon were doing but no, he did not care to do that. He stayed right on that chair where he was safe from the danger presented by all those babies. And mamas. And ladies. And...well, all of it. So many babies! So many breasts!
Levon, on the other hand, took it all in stride and at one week he weighs one ounce more than he did when he was born which is very good. Obviously, he is nursing successfully.
The lactation consultant who runs this group is a nurse I knew somehow back in the old days and she was working on the floor where I was admitted when I had a kidney stone when I was pregnant with Jessie. The funny thing is, she still remembers that. I do too. It was a fucking traumatic event but it passed relatively quickly (the stone AND the event) and Jessie is living proof that a little morphine never hurt any fetus.
Haha! But it was good to see Heidi. She's just what you'd want in a lactation consultant. Empathetic, non judgmental, simply lovely.

We packed it all up and left pretty quickly and Vergil made us lunch of quesadillas and the rest of the 7-layer dip that Lily had made for them. Delicious! After he was finished eating, August said he was done and Vergil said, "What does Roo say to Kanga when he is ready to leave the table?"
August grinned like a monkey and said, "'Scused please?"
And we all clapped and Vergil told him that yes, he was excused. He reported that a few days ago when Vergil had asked him this same question he'd gotten a sly and merry look on his face and instead of asking to be excused, he said, "All done!" and then laughed.
His first joke.

And Levon? Oh, Levon. That little love. He smiles a lot as he sleeps which makes me think that his dreams must be all about being in utero and that he very much enjoyed that experience. But in the only picture I got of him today he looked as concerned as August had looked at breastfeeding class. 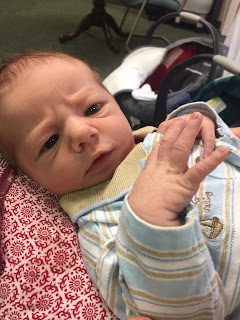 I told Jessie that he was concerned and rightly so as he'd woken up and there was no nursie to be found. He's such a calm little guy and I can get him to settle down so easily, just rocking him in my arms and talking to him. And when he nurses, he gets right to it and fills up his tummy and then falls asleep if he's tired and has those smiling dreams, or looks around if he's not tired, taking everything in. It is heaven to hold him and talk to his mama about him, to wonder and ponder who he looks like, what he will be like. Will he be like August and love tools? Will he love books and music? Will he continue to be evenly tempered and calm? Will he grow into that nose, just as his brother grew into his?

Well. He is gorgeous and I love him and his Boppy will be glad to see him. For those of you who have been wondering if I still have a husband- yes. Yes I do. He is on his way home from Georgia now and I will be so glad to see him although I'll be back to doing laundry every day and it'll take me a lot less than three days to fill the dishwasher enough to run it and I'll be going to the store regularly again instead of the ONE TIME DURING THE WEEK I went while he was gone.
I believe that I will make myself a little chicken broth with a few veggies and some frozen dumplings in it for my supper. One last bachelorette supper before I start in on the real meals again.
I love my tall husband and gladly take care of him as he takes care of me. And I'll be charmed again to find the little love notes he leaves me most mornings in the kitchen.
Cats are good for company but they sure as hell don't leave love notes. They leave things like decapitated mice in the bathroom with accompanying entrails.
Maybe they just did not get enough tummy time as babies. 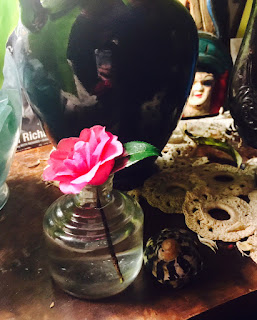 Sasangua from my very own yard in ink bottle found by detectorist.