The Power Of Prayer? 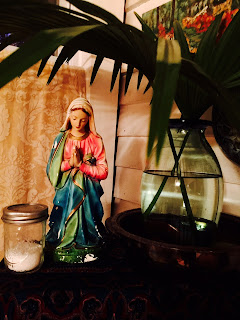 "Prayer works," said Paul Ryan today, his blue eyes rimmed with red as if he has been praying without cease since the Texas church shooting.

I had a dream last night wherein I was talking to a believer about faith and their god and I think I ended up saying, "There is not one scintilla of evidence that prayer has ever done anything at all for anyone."
Of course I also dreamed about an orgy (not as much fun as you'd think) so there is that.
And of course, prayer has done much for many people in that it calms them, it gives them hope, relief, and peace. In that, some forms of prayer are much like meditation, I suppose. Taking some time to focus quietly on something important, to try and take oneself out of the equation for a moment, to be mindful that some things are beyond our own control and that we need to accept that.
But with prayer, one often assumes that there is a benevolent, all-knowing god who will lift the burden and make things right.
I guess. Not like I'm an expert.

BUT, to offer the ubiquitous thoughts and prayers to those who are suffering after another gun-related tragedy has become nothing but a joke, a useless, meaningless mantra of ridiculousness offered up by those who could, in fact, actually do something about gun violence but who choose not to.

I've always said the patriotism gene and the religious gene have to be related.
And I got neither.
To me, it is so obvious that wrapping oneself in the flag while holding up a Bible is nothing but a taking of props to play a part convincingly enough for others to withhold criticism, to put up a curtain to hide the man behind it as he manipulates the smoke and mirrors with which to gain his own ends be they political or financial or some other selfish purpose he needs to conceal from those he wishes to use for those ends.

The best scams always involve asking for money either for veterans or for some religious organization. Always.

But back to prayer- WHY do people believe in it? Is it a sort of random reward effect in that sometimes the things people pray for actually do happen? Is it a way to deal with the vast and horrible uncertainty of life? With meaningless suffering and pain and tragedy? The pastor of the church where his daughter was among the 26 people murdered said, "I don't understand, but I know my God does."
What sort of a god would allow this to happen? To assign any sort of positive meaning to the killing of children?
A fucking malevolent one, that's for sure.
It's always seemed to me that either
(a) God is not all powerful, or
(b) God is not a benevolent and loving god at all.
I am not saying that it is ridiculous for this pastor to lean on his god. He desperately needs some sort of succor right now and if believing that there is some sense to what happened and that a loving god knew what he was doing to allow that to happen, well then- let him take comfort where comfort can be found.
Which has nothing to do with our politicians offering their thoughts and prayers for...what?
Comfort for the survivors? For magical intervention which will somehow not piss off the NRA and yet, will somehow prevent another senseless gun tragedy to occur? Because that's worked so well in the past.

Sometimes I read a few blogs by women who have deep, deep faith in various Christian religions and their take on prayer is always very similar which is that their god has their best interests at heart, no matter what happens and that god answers their prayers although rarely in the way they think they want which explains why they so often feel as if their prayers are going unanswered.
Eventually, they claim, their prayers always will be answered but their god knows what they really need and that is what he will give them in his own time frame. Which of course eliminates the need for proof that prayer works because obviously, it always works, just not in the way we think it should. And also implies that oh, we silly little humans, we think we know what we need and want but we don't. We are children and god is like a father who knows all, sees all, and hands out his favors and his magical works in wondrous ways, his miracles to perform.
So, in some sort of twisted and contrived way, god not answering prayers is proof that god answers prayers and if we don't believe that, we are failing to show faith and displeasing god.

Yes. Sometimes beautiful things spring forth from tragedy. And often, tragedy is nothing but tragedy and there is no coming back from it.

Sometimes humans do learn from tragedy and solutions are found to prevent similar ones from happening. This is not unheard of. We are capable of learning and making things better but almost always, science and education are involved as well as innovation and creative thinking.
Work. Hard work. People in labs and in classrooms and in the field and goddammit- people in power who create laws and make policy. People who are brave and who are brilliant and who are merely doing their jobs the best they can for reasons having nothing to do with fame or fortune or political advancement.

Not people wrapped in flags and holding up Bibles that they've never read.
Not people who proclaim that instead of changing gun laws, we need to pray.