I Went Out And Did Not Die And It Was So Very, Very Good

I was a whiny, bitchy baby today and did the things I needed to do and made the pies and the cornbread for the stuffing and drove to town and did some things there I had to do and then this evening, I pulled up my big girl panties and did the thing I knew I should but which, because I am who I have become, was so hard, and put on a pretty dress and some make up and jewelry and Mr. Moon and I drove back to town and first we went by Jessie and Vergil's house because I suddenly realized that I missed Levon way too much.

Vergil's sister and brother-in-law and their three children and Vergil's dad and his wife were all there, eating Thanksgiving Dinner Part One and they sang us the Thanksgiving Dinner Song which they'd all been singing and I got to hold Levon who looked at me as I spoke to him with those deep, deep eyes, and August grabbed his grandfather's arm and said, "Come," and Boppy followed him to see what he wanted him to see. We only stayed long enough to kiss and hug everyone and remind Levon of who we are and August wanted to come with us when we left.
"Mer's car," he said.
"Boppy and I are on a date," I told him. We will see you tomorrow."
"Auggie date," he said, and oh, my heart broke for having to leave him but he had his cousins and his aunt and his uncle and his mama and his daddy and his brother and his grandfather and his Go-Go and I knew he would be okay.

And then my husband and I drove to the place where people that I love were playing music and people that I love were listening to them and May and Michael were there and it was exactly the right thing to have done.
I could write an epic tome about the people there tonight and our history and how we are bonded, how we are bound, but over the years I've already done that and it was beautiful. 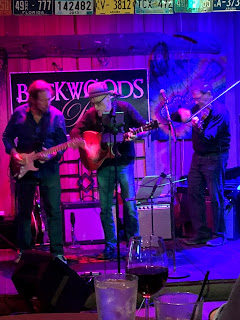 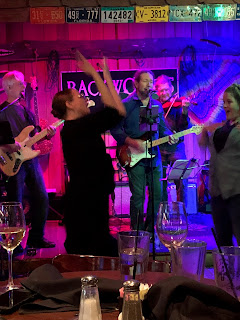 There were children of my friends and their children and even a grandchild, making my friends great grandparents and all of us old folks were younger than the children are now by far when we met.
And here we were. Still here! And those fellows are still making music and it's music that came from a place of the complete joy of being together again- a once-a-year-event, and those of us in the audience closed our eyes and swayed and remembered and whistled and whooed! and clapped our hands and sang along with them, the words embroidered in our souls like the borders on a crazy quilt, like the various and splendored threads woven deep into a cloth which makes up our lives.

This is always my favorite part of all of the holidays. The catching up, the holding on tightly to each other, the music, the memories of so long ago (just yesterday), all we've been through since then and still...here we are, here we are, here we are...celebrating new lives, paying tribute to those not with us anymore and still sorely and grievously missed, the spirits of them still around us, the spirits of those we were, still within us.