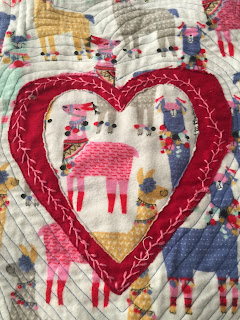 It has been the sweetest day in many ways and right now I am perfumed with a delicious bouquet of white vinegar, Fabuloso, pineapples, and onions.
Those things may sound like they don't go together but somehow, they do.
Listen- I am a terrible housekeeper. That's just all there is to it. Plus, I hate housecleaning. So I rarely do it. Oh, you know me- I sweep, I never leave the dishes dirty overnight and keep a fairly clean kitchen. I fold my laundry right off the line or out of the dryer, I try to keep the toilets clean and the sinks clean enough and I don't let the garbage or recycle pile up but frankly, I'd rather clean the poop out of the henhouse than dust my furniture or clean a baseboard.
But when I have company coming, I just absolutely have to get a few things in order and so that's what I did today after I walked and went to Publix. I haven't even scratched the surface of what needs to be done.
But the guest room has clean sheets, the bathroom is slightly less moldy, and the kitchen floor has been mopped.
And Lon and Lis will love me anyway, I think, and if they judge me, they keep it to themselves.
They keep a tidy house and they're the busiest, most productive people I know. I have no excuse for my slatternly ways. None at all.
Well, la-di-dah.
I'd say that my cooking makes up for a lot but Lis is as good a cook as I am and that's the truth.

Okay, okay. I am not beating myself up. I do what I can do and that's all I can do, to misquote Popeye.

Another detectorist knocked on my door today. He arrived in his work truck and still had his uniform on and had his metal detector with him and asked with such politeness if he could search my yard that I had to tell him yes.
His name was Hiram.
He found some old trash and a few modern coins but nothing of interest, really. He wants to come back though and swears he'll find an old coin. That it'll just take some time.
"This is my crack," he said, hoisting his metal detector. "I just love it."
In the summers he dives in the rivers for arrowheads. He gave me a beautiful old ink bottle that he found in another yard a few days ago. He doesn't mess with bottles. I'll post a picture of it when I clean it out. It will make a spectacular bud vase.

And speaking of which, Mr. Moon did some mowing this evening and found this. 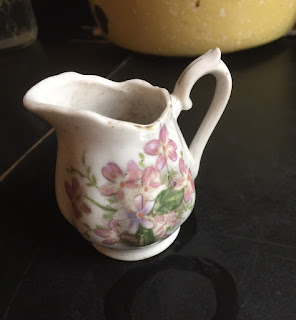 Just a little old pitcher, sweet as can be, right on the ground by the big oak behind the church. It probably came up after the rain and the chickens might have had something to do with scratching it out. It has no markings but I think it's precious.

That's about it from here. I believe I will sleep very well tonight. I am grateful that I've had a good amount of energy lately and I am so looking forward to seeing Lon and Lis and of course, we wait on King Richard. 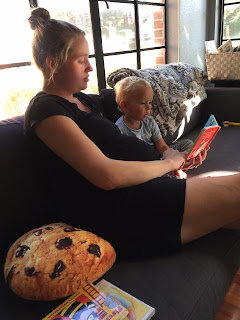 That's a picture that Mr. Moon sent me when he dropped by to see the lady-in-waiting and her son this afternoon.

Give a good thought to Hank tonight, if you will. A very, very dear friend of his died today.
A brother, as Hank calls him.

Let's love one another. That's really the most important thing we can do.