There's a restaurant in Tallahassee called Backwoods Crossing and with the exception of the Waffle House, it's actually the closest restaurant to my house, I think, if you take the interstate. Like, seven minutes away. I've talked about it before because it's pretty unique, for this area, at least. It's not just a farm-to-table restaurant, it's a farm AND table restaurant and Lily and Maggie and Vergil and Jessie and August and Levon and Mr. Moon and I went there today and it was like having lunch and a field trip, rolled into one.

Magnolia and August were both thrilled to see their Boppy and Maggie hugged him and hugged him and loved on him like he'd been off to war and come home. And August, although not as demonstrative, was happy to see him too. 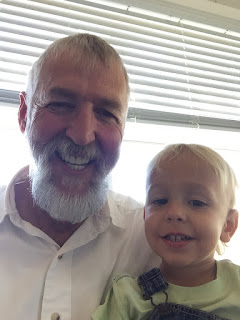 He has not forgotten that when Levon was born Boppy said they'd come out to our house but Levon came so fast that by the time August had fallen asleep and taken a little nap in the car, he was already home seeing his little brother for the first time. And so he asked if he could come to our house and I told him that this weekend he could. Vergil says he's been talking about it so it's a big deal. Levon needs to come out too because it is time that he is introduced to Mer and Bop's house- its smells and impressions and sounds, so that he will always know that it is his home, too, just as it is for all of the grandchildren.
But back to lunch. 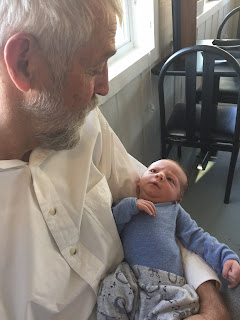 Little boy, big man. That is the chillest baby I may have ever met. He just studies you and studies you. And his mama manages him and August both with apparent ease and much grace. Vergil has stepped in and is enjoying his paternity leave so much. He and August are knocking one project after another off the to-do list.
Maggie adores her new cousin. "Baby!" she says and holds out her arms. She wants to kiss him and hug him and hold him. August may be somewhat happy that her affection has a new target besides him. She still wants to kiss and hug him too and he always looks around like, "Really? Can't someone do something about this child?" 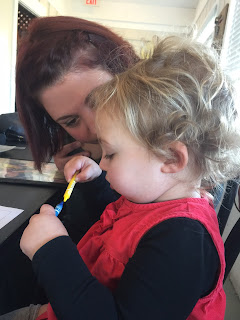 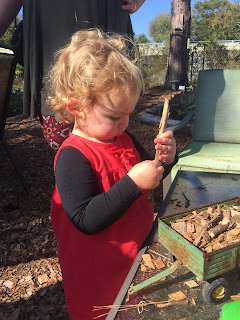 Now who wouldn't want to be hugged and kissed by that beautiful little cherub of a girl? That hair, those lips! And I do not blame her for wanting to love on August, either. 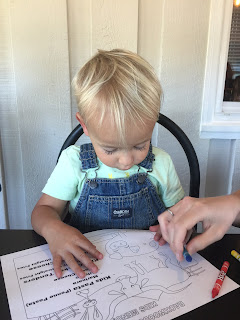 Look at those eyelashes! He usually gives me the same look he gives Maggie when I'm trying to hug him- patient resignation.

So we ate our good meals and afterwards, we went outside and checked out the garden area in front of the restaurant. August was fascinated, watching two people plant a bed. 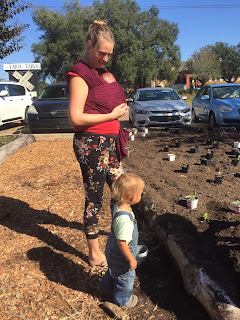 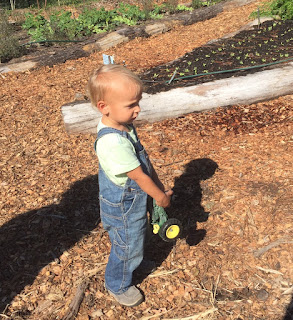 He was dressed appropriately.

And after exploring the front garden beds, we walked behind the restaurant where it appears that they have several acres under cultivation as well as a huge hen house where many, many hens looked happy and healthy and the one rooster looked...tired?

What a great set-up and they are using all sorts of horticulturing techniques. Some guys were drilling logs to put shitake mushroom spores in (there's a word for that but I can't think of it) and for someone like me, the whole thing is just thrilling. Composters to compost the chicken shit, fruit trees, so many greens and various heirloom vegetables. It was really just gorgeous and we probably spent most of an hour, walking around and admiring things and asking questions.

I would have taken more pictures but my phone is wonkier by the moment and I figured out exactly what's wrong with it. Read about it here if you want to and you probably don't. I'm fairly pissed at Apple because this is a completely known design flaw and yet, if your phone gets it you are simply screwed.
Well, so it goes.

My husband is home and I am making soup and bread. It is quiet in Lloyd, it is cool, we need rain.