Gravity Is Having Its Way 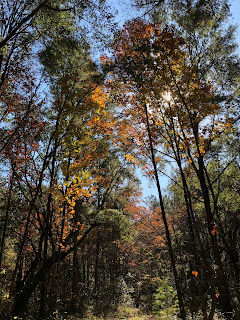 My hands smell of white vinegar and Fabuloso tonight because I finally got around to mopping the kitchen floor. The floor was in desperate need of a good cleaning, not only because of the usual reasons but also because of all the deer meat that was inadvertently dropped on that floor last weekend. You'd think that my cats would jump on those little bits of ground venison and eat them with great enthusiasm but you'd be wrong. Every other animal I've ever owned has loved venison above all other meats and we had a cat named Bob who looked to be dying and the vet said that he either had a brain tumor or some other terminal illness but then he ate about a pound of deer liver and lived for another five or six years. The chickens even flock around when deer is being cut up. They love it.
But Jack and Maurice, as I have often said, have the strangest appetites of any cats I've ever encountered. Maurice refuses most cheese, roasted organic chicken, eggs, and even ground beef, cooked or raw. However, she loves flavored yogurts, processed lunch meat and box macaroni and cheese. Jack is not very interested in what I would call quality foods either, but he eats so much Publix brand cat food that he frequently barfs it up and goes back for more.

Anyway, I had no intention of writing about cats and what they eat this evening. I'm just floating along on the stream of consciousness that seems to be the way my mind operates lately. I had a good walk this morning and went by the fally-down house with the intent to take pictures and I did. Last Sunday when Jessie and I walked past it, I noticed that it was tilting and leaning far more precariously than before. I walked all around it, fighting spider webs and thorn vines to get pictures and just as I wrote nine years ago about the place, it draws me in and yet, is somehow forbidding although as more and more light is let into it by falling boards and open places in the roof, the ghosts seem to be less active, more distant and disinterested.
The north end of the old place is naught but a higgle and piggle of planks, a janky snarl of timber. 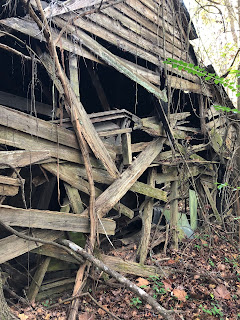 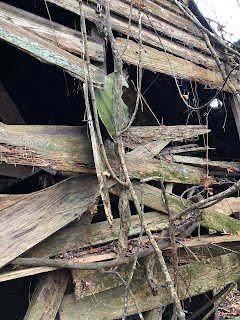 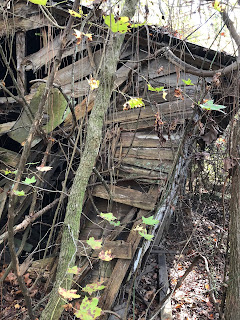 Still, the place fascinates me and I wonder what life was like for those who lived in it when it was fresh built, smelling of the perfume of fresh-cut pine, and I have respect not only for the people who built it, inhabited it and made it their home but for the wood itself, some of which is still straight and true, still strong and in its way as beautiful as the face of an old person who has lived a life and still wakes up every morning to live more of it. 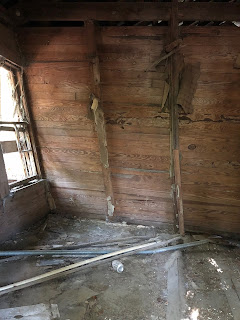 The peeling and tattered wallpaper, giving tribute to the woman who hung it. 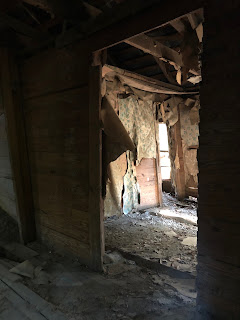 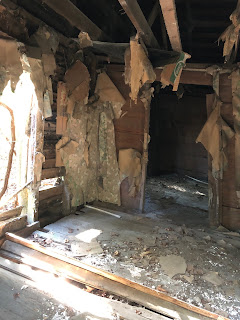 They had stapled cardboard to the rafters to keep out the cold and the heat, too, most likely. 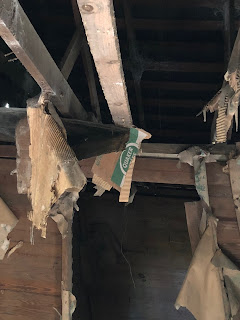 I showed these pictures to my husband and he said, "I'd love to get in there and salvage some of that wood."
I wish we could.

But for now, the old house is just slowly falling in on itself and someday it will be nothing but a pile of boards and window frames, stovepipe tin and silent history.
I don't know if it will continue to stand for six months or six years. It looks to have been sturdily built and is taking its time to let nature have its way with it.

Again, not unlike a person. We all know our eventual fate but never the time or the day or the hour, as the Bible says.

Meanwhile, I have clean floors in my own old house, which still stands tall and strong, even as small things about it fall into disrepair. It shelters and holds us and delights me to no end. I am not new myself and every day I notice something previously unseen or unnoticed about me which indicates, if not rot exactly, then a tilting, a shifting, a sign of wear and tear or simply older age.
This is the way of everything, eventually.
And there is a modicum of comfort in knowing and accepting this, just as the earth will accept me back into itself, even as I try to stave it off as best I can.

Time to make supper again. I wonder how many meals have been made and eaten in this house? An uncountable number, I would think.
I am about to go add one more.
And am proud to do so.