How To Have Fun When You're Old

I had to get up obscenely early today in order to get to an 8:00 dental appointment which for some reason, I had absolutely no anxiety about. In February I was having trouble with one of my back molars and went to see the dentist then about it and he took an x-ray and said that it was not going to be around forever (I can't remember what was killing it but my best bet is old age) and told me my options, one of which was to just wait and see how much mileage I could get on it, which is what I did. He thought it would be good until June which seemed to just be a random month that he plucked from the air so here we are in November and it's been bothering me again and that's why I went to the dentist.
And it was the most hilarious dental appointment I've ever had and to be honest, sort of fun.
For one thing, no one was in the office but the doc and his court of beautiful hygienists and assistants and the desk lady and he was still wearing his workout clothes. He wore them into the exam room where I'd been escorted and had the Official Paper Bib chained to my chest and the first thing I said was, "Let me just say that I'm very glad you decided not to dress up for me today."
And I really felt so much more comfortable than I would have if he'd been wearing scrubs.
So he laughed and listened to my story and looked at the tooth and the old x-ray and asked me what I wanted to do and I said, "You're the dentist," and then he gave me my options and I said, "Let's just pull it."
"Okay," he said. "You want to do it now? I've got twenty minutes before my first patient comes in."
"Well, I have to go to Costco with a bunch of grandchildren," I said. "And it's about to be Thanksgiving."
So it was determined that he would give me some antibiotics and I made an appointment to get it pulled on Monday. And then we chatted about other things including grandchildren which he does not have nor does he want because he's vain and doesn't want to think of himself as a grandpa which he freely admitted. I thought that was hysterical. He's older than I am but not by much. We also talked about root canals which he doesn't think too highly of any more. And he had a few words to say about dentists who only see people with Hollywood teeth and what all they do to preserve the mouths of beauty which most regular people simply don't need. We also discussed Thanksgiving and Christmas and family gatherings and he's sitting there sprawled on the rolling doctor chair and I'm lounging on the exam chair with my feet pulled up and just being as comfortable as I can be and the assistant was standing at her post with very good posture and she was certainly wearing her scrubs and I think her eyes almost rolled out of her head with the shit-shootin' going on in front of her at 8:12 a.m. on a Tuesday.
I ran into my dental hygienist on the way out and we did a quick catch-up and hugged and I told her about Levon and I guess the doctor heard me because when I left he was singing the Elton John Levon at the top of his voice although, as one of the women told him, "That's not the right tune."
I don't think he cared and the desk lady told me that she had no idea what was going on with him today and that he was being embarrassing but like I said, it was the absolute very best dental exam I have ever experienced in my many years.

A little while after that, I went to Costco with Lily and her three precious hellcats. Look at Maggie! 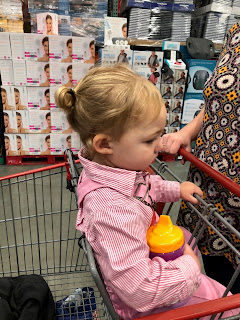 She had pigtails and her pink overalls and a pinstriped button up shirt and she was the most adorable child in the world. And Owen and Gibson hugged me and hugged me and at one point, Owen just came up and held on to me like he was saving me in his heart for forever.
When we were standing in line to get our purchases tallied with the receipt, a woman standing in line at the returns desk started to slowly, slowly, fall backwards. It was as if she were falling in slow motion. There were at least four people standing there and aware of what was happening and holding out their arms to catch her and help her gently down to the floor. She was a very lovely older lady, turned out and stylish, hair done, make-up on, and she'd just given blood that morning. I imagine she needed some fluids and maybe some sugar and I did not get involved as a nurse was right there, talking to her and all those arms were holding her as she sat on the floor.

I hope she is okay. I imagine she is.

And then we all went to China First and had a buffet lunch and Gibson said many things that made me laugh and now I can't think of a one. Here's something I find odd- at that particular Chinese buffet, my very favorite thing of all of the dishes is fried zucchini. They get zucchini which are almost obscenely huge and slice and fry them perfectly so that they are delicious crunchy on the outside and tender on the inside.

That's about all of the important things that happened to me today. Fun at the dentist's, shopping at Costco, eating zucchini, loving my grandchildren. Oh! And it rained! A beautiful, good rain and I will admit that I napped while it was happening, as content as Jack who napped beside me.

Here's a picture of young Levon who has changed tremendously in the first week and a half of his life. 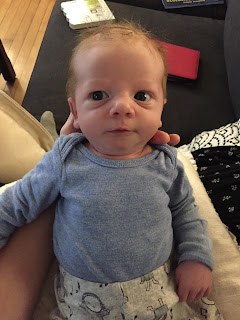 Don't you think he looks like a history teacher named George? I do. And I love him so much it hurts.