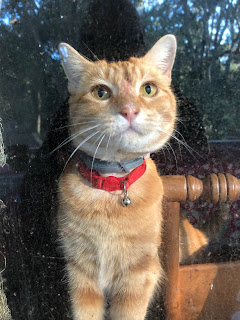 This was Maurice this morning, tapping on the glass to get my attention for me to come back inside to feed her. Sometimes she taps on the glass only to get my attention. I suppose. She is an odd cat, as we all know by now. Although she hasn't drawn blood from me in weeks, I think it is more of a situation where I have learned to get in and love on her quickly and then move away even more quickly. She does go sit in Mr. Moon's lap in the evening before we go to bed and she follows me out to the garden sometimes. 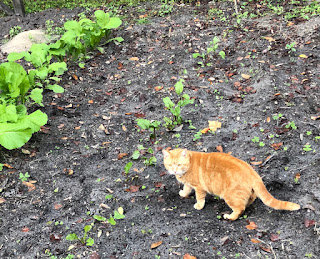 Here she was yesterday evening as I was picking greens for salad and she was pretending to inventory the small beet plants.

And of course, she still brings me gifts of dead things.
The last of one of these gifts led to a rather macabre event yesterday. Jessie and August and Levon and I were in the library, reading books to August and then watching him bounce on the horse and look for new books and Jessie and I were chatting away. I had Levon in my arms and I looked up to see that August was holding something and looking at it. It took me about ten billionth of a second to realize what it was. It looked exactly like a toy mouse or rat and although we do have a beloved rat puppet, I knew immediately that this was not that puppet but in fact, a real, formerly live, now dead rodent of the mouse or rat variety.

"Jessie!" I yelled, although I was about one foot away from her. "He's got a mouse!"
Jessie looked up and yelled, "Drop it, August!" and he did and we immediately realized that we had not handled this in the proper way at all because he was paralyzed, his eyes welling up with tears, wondering what in the world he had done to make his Mer and his mama scream so.
In other words, breaking my heart.

Jessie grabbed him up and took him to wash his hands and we babbled on and on, trying to comfort him and explain about how cats kill mice and rats and bring them in the house for presents but that they can be very dirty, and we shouldn't touch them, etc., etc., and that he, August, had done nothing wrong, nothing at all, and had done the right things.
I scooped the poor creature up in the dustpan and we decided that we would go outside and show Boppy and Daddy the rat (which Mr. Moon confirmed it was) and tell them all about it to try and normalize the situation, which we did. He was still a little freaked out, but soon recovered, and when I threw the poor creature into the woods by the railroad track, we all said, "Good-bye, Rat!"
And if August grows up to have a horrible neurotic fear of rodents, it will be all my fault and I've already apologized to his parents.
At least this one didn't have any entrails hanging out. In fact, it looked perfectly intact.

So that was too much nature, part GOzillion.

In other cat news, my next door neighbor called me last night to ask if Jack was okay. She hadn't seen him in two or three weeks and was very worried. I told her that he was fine, as he is, and she said, "Well, okay. I figured you'd let me know if he was missing. Tell him to come visit me and I'll brush his hair for him."
She brushes his hair.
She gives him canned cat food.
I have no idea WHY he hasn't gone to visit her. Forget the canned food, I'd go visit her if she brushed my hair.

I should have told her that Jack had no plans to come and see her again until she took down the Trump/Pence sign in her yard but I didn't have the balls.
They are such a conundrum, these people. They would literally get out of their beds on a cold night to help me find a chicken. I know they would. They give MY cat canned food and BRUSH HIS HAIR! They call because they are worried when they don't see him for while. They keep an eye on my chickens and let me know if anything is amiss.
And yet, they not only voted for Trump, they still have his sign in their yard.
What can you do? This is life in a rural area and just goes to show that people may be completely different from you in a thousand ways, and yet, still be good neighbors.

So remember I was supposed to go get my tooth pulled today?
Well, I went and as I sitting there in the chair, Doc came in and asked if the antibiotics had helped and I said, "Yes, they had," and he said, "Tell me exactly why you want me to pull this tooth."
"Uh? Because it's started to be a problem and I don't want to have to take antibiotics two or three times a year?"
He hemmed and he hawed and then he said, "Well, I just hate to pull a perfectly good tooth and it looks fine and it doesn't have a cavity in it and I'd like for you to be able to get as much milage out of it as you can."
I thought about it and said, "Makes sense to me," and he said to call if and when it started bothering me again and I said I certainly would and that was that.

And then I went to the grocery store and took my own sweet time of it because I knew that Mr. Moon was finishing up the sausage making and I just really did not care to get involved and that worked out well because he had all of those giant summer sausages cased and tied and ready to smoke when I got home.

And, I spoke too soon about Maurice. She came up and wanted some love and I was fool enough to give it to her and now my hand is bleeding.
But not much. 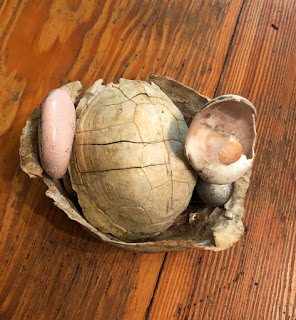 It is made of turtle shells, sea shells, and the painted rocks that Owen gave me.
All of my grands have been fascinated by these turtle shells which delights me. Every single time I've found one in the woods I have felt blessed.
And I have been.