So it's Friday night and I'm a hunting widow but that is okay. I have clean sheets on the bed, good books, all of the laundry is put up, and I have a tuna steak marinating in ginger-sesame-soy. Mr. Moon went crazy on the BOGO Eight O'Clock French Roast and I have sixteen bags of coffee.
I am not kidding you.
And it was a good day.

I went to town OF COURSE because supposedly Jessie and Vergil needed some help with August so that they could get things done but as we all know, I really mostly just had to see the babe and get my hands on him again although playing with August is never a chore. He's just so much fun. I am doing my thing with him where I have conversations with him that I know he doesn't really totally understand but if he gets anything out of them, I'm glad and I get a lot out of them. So I played with him and we read books and pretended to go to sleep and we had our first argument. He has a stuffed pelican and he told me it was a turkey. We spent at least a minute with him saying, "Turkey!" and me saying, "Pelican!" and we laughed a lot and he finally admitted that it was a pelican but I'm not sure he was truly convinced.
He's a goofball.

When I got to their house after hitting up Costco for treats and roses (where I had to announce to at least three people that my daughter had a baby yesterday), Jessie was in the tub with the new boy. It took me right back to when she was born and I took a comfrey bath with her and actually, I bathed with all of my babies, holding them in the water and watching them uncurl their little legs and arms, their eyes wide open as they remembered being in the womb. Such an amazing experience. Jessie told August that he could get in the tub with them if he wanted, but he said, "No."
He's still being a bit unsure about all of this although he did spontaneously kiss his brother for the first time while I was there and it was the sweetest.
I got to hold the baby for awhile after the bath as Jessie got dressed and did luxurious things like brush her teeth and although he'd been fussing a little when he got handed over, I got him right to sleep and sang him little baby songs that I made up and I was so loathe to give him up but my big boy wanted Mer to play with him and so I gave him back to his mother and she and Vergil got down to business, trying to figure out what to name him although... 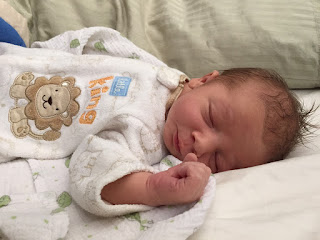 ...as you can see, he already has an outfit with his royal name on it, should it come down to that. Hank suggested that they name him Rex Racecar because "Rex" means king and "Racecar" is a palindrome and they sound good together.
Well, they do.

No name was decided on but I hear that they are narrowing it down and will make an announcement soon. I am feeling impatient about this but I do realize that he has his entire life to carry that name and it should be the right one. And I trust his parents will indeed select the right one because they love him and they are smart and they are wise.

After I took my leave, I went to the store and bought ingredients to make the traditional postpartum salad, loaf of braided challah, and a prune cake. I dug out my salad recipe yesterday. 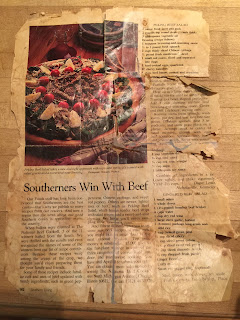 I really need to write that recipe down because that old page from a Southern Living magazine is not going to last much longer. I'm not sure that Jessie even wants this salad but it is my job to make it and that is the way it is. She can feed it to the dog if she wants (she won't) but until I've delivered those three things to her house, I have not properly performed my motherly duties.

Vergil's mama and step-daddy are coming in either tonight or tomorrow and I am glad for that. They weren't able to come when August was fresh-born and they deserve the joy of getting to meet their grandson when he is still so purely new. Also, August will be beside himself with joy as he loves them tremendously and they will spoil him to pieces which is right and proper.

And so all is well here in my tiny world. The chickens are in the roost, all ten of them, the church folks are singing next door, and my new grandson is doing all of the things he is supposed to do which is to nurse, to pee, to poop, to sleep and to wake. And sometimes cry. But I don't think he does too much of that although with infants, that can change in an instant or a tummy ache. Jessie looks beautiful and easy with her new one and Vergil does too, to tell you the truth. 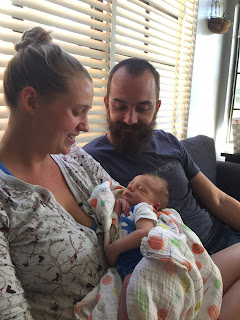 And here he is, the little man, sleeping in a contemplative pose. 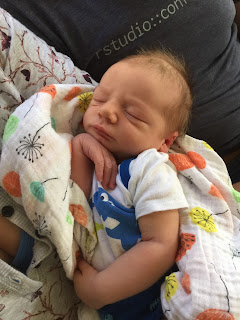 Oh, how I love him already from the top of his fuzzy haired head to the tips of his perfect ten toes.

But you already knew that.