He Has A Name 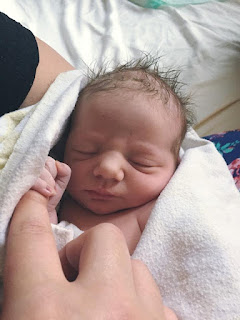 Cobbs because that was Vergil's grandma's middle name and she meant so very much to Vergil when he was growing up and when he was grown up and to Jessie when she became part of Vergil's family. I'll never forget her telling me about how she was there the night that Jessie and Vergil met. It was at a dance and she said that all the girls had set their caps for Vergil but once he danced with Jessie, that was it.
And I believe it. They are still dancing and I think they always will be and I think that the spirit of Grandma will always be smiling on them.

And Levon.
That's been one of Jessie's top favorite choices for a long time.
It's a beautiful name and it gives tribute to one of the mightiest and best musicians this country has ever known- Levon Helm who was the drummer for The Band. If you aren't familiar, google.

I could not be happier. I could not imagine a more perfect name for this boy, my fifth grandchild.

I am drowning in the righteousness of it all.

Hello, Levon Cobbs. You are loved.