He Is Officially A Keeper! 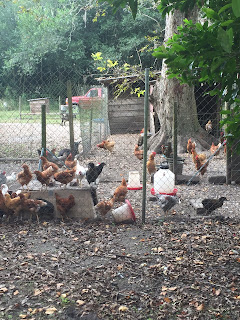 I decided not to add to the busy-ness of the Weatherford household today as not only were Vergil's parents getting in but it was also the day Diana made her postpartum visit and also the day the doctor came by to check out Levon. Can you believe that in this day and time there is a doctor who will actually come to the house of home birth families to give the baby his or her first check-up there? This doctor does. And he always says the same thing which is, "He's a keeper. Start him on probiotics."
I love that.

Anyway, it was a perfect day to be outside, cool and a bit overcast and so I cleaned out the hen house and put the poopy hay in the garden and then I decided to look for the eggs that I know Dottie and Darla and Violet are laying somewhere. I am only getting eggs from Lucy and Honey and Nicey and that ain't right. I did not find the eggs but I did realize that my next-door neighbor seems to have acquired about one million new chickens. See above.
I mean, she has a LOT of birds.
I also saw an older kitten and I'm pretty sure it's feral and I'm glad it hasn't come over here to meow and beg for food because we all know what would happen and I already have an insane cat who no doubt had a traumatic childhood.

Then I got on my knees in the garden and weeded and planted some onions from last year that have started sprouting and weeded and thinned the mustards, the beets, and the carrots. Doesn't sound like much but it took me all afternoon. I also reseeded a few places in the carrot row where either nothing came up or else something ate what did.

Okay. Let's talk about Louis CK's penis.
In what universe would he think that random women would just love to see it and what he can do with it?
I knew this announcement was coming because the rumors of his behavior have been bouncing about for a long time. At least he admitted that the accusations are true and admitted that his actions had no doubt hurt these women (I feel certain that there are far more than the original five who came forward) and said that he feels remorseful but he didn't say he was sorry.
You know, I sort of thought that Louis CK was one of the good ones. I mean, he does have a bit of a weird vibe about him but I figured it was just because he's a seemingly tortured soul who has the weight of the world on him.
That may be true but that is obviously not the only reason he's a tortured soul. He knew that shit wasn't right.

Well, it's starting to appear that Hollywood will soon be devoid of men who can get a movie deal or a TV deal or any sort of deal or even lunch, for that matter. Then again, Woody Allen's still cranking 'em out. Politics as well. Hell- let's face it- I bet men in every situation where they've been in power from the mightiest to the least are doing a little boot-quaking.
Of course, there's DT and he got elected and I don't want to talk about that.

Let's talk about this. 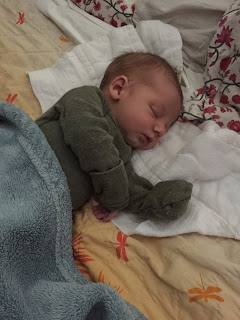 Levon napping. I just love saying that name. Levon, Levon, Levon.
Levon, get in this house! Levon, stop messing with the chickens. Levon, you already had two cookies. Share with your brother! Levon, I just love you. Levon, you are so precious. Levon, you are peaches and cream and love and sweetness. Levon, play us a tune.
And so forth.
I will go see him tomorrow. I will kiss him a lot. I will smell his neck and his head and all of him that I can get my nose on.

And now I'm going to go make some curried vegetables which will include thinned mustard greens and teeny-tiny beet greens.

Life in my world does not suck right now. Not one bit.