This is what I did today. I made Challah. 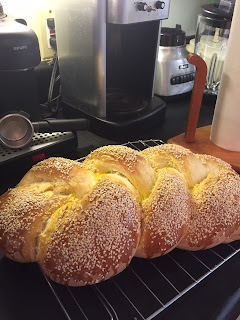 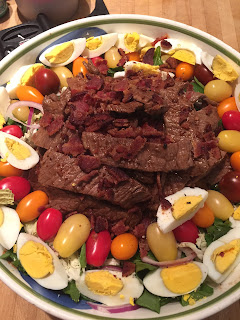 Guaranteed to raise a new mother's hematocrit. Under all that meat is a lot of spinach.

I had so much fun. I love to cook and bake. I could never open a restaurant though. I mean- it took me all morning to make those two things. Any restaurant I ran would not only have an extremely limited menu, if I got more than five customers a day I wouldn't be able to feed them all.

When I got to town after I'd finished making the salad and bread, I went by the Computer Doctor place and showed the guy my phone. Then I told him about the little strip of gray and white at the top it gets sometimes.
He immediately quit messing with the phone and said, "Yep. Sounds like the motherboard. We could try replacing the screen but from what you're telling me, it wouldn't work."
"So," I said. "I need a new phone."
"Yep," he said.
Dang.
Of course here's the funny thing- the phone's working better now than it has in days.

Then I drove over to Jessie's. She was holding dear little Levon who was sleeping. I traded her dinner for her baby. I held him for a good, long while and it was perfectly lovely. August was napping again and I wish I could have seen him too. I miss that jolly little man. Here's some more pictures that Jessie had taken. 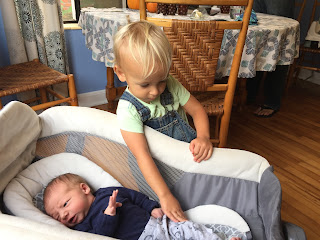 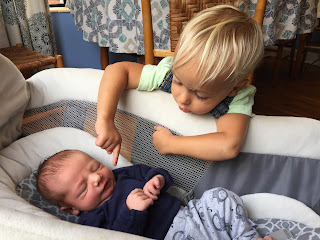 I could just die with the sweetness.

Here's one from yesterday when Magnolia met her newest cousin. So while I was there today, holding a sleeping baby boy, Jessie and Vergil and I just sat and talked and talked. Vergil asked if I'd like to go paddling with him and August soon, meaning I'd sit in front with August and hold him and feed him snacks and love on him as Vergil paddled us down a river in a kayak.
Sounds like heaven to me.
I'm so glad he asked me!
The company Vergil works for gives him a few weeks of paternity leave and he is taking advantage of it, doing things with August and cooking meals and hanging out with Levon and Jessie. And building a fence. Things like that.

Jessie reports that Levon is continuing to be very mild mannered, mostly just nursing and eating and hanging out. The perfect baby, it would seem. He is the most awake during the same hours he did the most dancing in Jessie's belly which is from about 7-10 at night and then he nurses and goes to sleep. Of course she has to wake up with him to change his diaper and get him on the breast, but because they're sleeping together, she can fall back asleep with him nursing and then he falls asleep too. Vergil said that every time he wakes up, Levon is either nursing or being cuddled by his mama. This brings back so many sweet memories for me. I always thought that sleeping with my babies was just about the best thing in the world. And I still think that.
Until they got big enough to kick me out of my own bed at which point they got to sleep in a crib.

I finally gave Levon back to his mother as she was talking about a nap of her own and I felt bad that I'd stayed so long. I came home and thinned the lettuces. 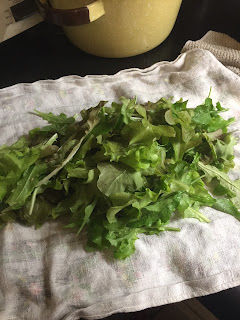 Thinning is the hardest task in the garden for me. Not physically. Physically it's probably the easiest. But I just can't stand to pull up a perfectly good plant which is also a baby of sorts. It feels like green-murder but it helps to think of what I am pulling as micro-greens rather than baby plants. And my Lord, they are so delicious. Best salads of the year. I like to just dress them with a drizzle of olive oil, a splash of balsamic vinegar, a little salt and pepper, and maybe a crushed clove of garlic and then mix it all up in the big wooden bowl with my very own clean hands.
My sweetheart and I love these salads. I think of what constituted a salad when I was a child, which was iceberg lettuce, a sliced dry, pink tomato, drenched with French dressing or, if my mother was being extremely fancy, some of that Good Seasons Italian dressing you made with a packet of the seasoning, some vinegar, oil, and water. You shook all of that up in a cruet that Good Seasons sold with lines on it indicating how much of the vinegar, water, and oil you should use. It wasn't bad.

Okay. One more thing- I forgot to tell you what Owen said yesterday when he saw my dump cherubs which was:
"Where did you get THOSE ugly things?"
I laughed. The boy has more discerning taste than his grandmother. I admit it.
I love that boy. And his brother and his sister and his cousins. I have no doubt that they are every one smarter than I am and that thought thrills me to pieces.