A Sunday Worth Living, For Sure

I've been limping along with my phone for the past two or three days. It just doesn't want to respond to the touch screen and yes, I've done about fifty hard-starts or whatever you call that resuscitative maneuver and I've transferred a ton of pictures to Google pictures and deleted them out of my photos and I've gotten rid of about four apps and the damn phone still tells me I'm running out of storage and like I said, it doesn't want to respond to touch and also, it's been sucking battery like DT sucks donkey dicks and well, obviously I need to take it in tomorrow if for no other reason than that my phone is how I listen to audio books approximately nine hours a day and oh, let's not forget- it's HOW I GET PICTURES OF MY GRANDCHILDREN!
So.
Important.

This morning I made a prune cake. It may have been the best, prettiest prune cake I ever made. It looked like this: 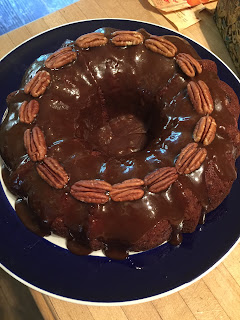 I wrapped it up and went over to Lily's and drove with her and her kids to Jessie's where Vergil's stepdad was helping him build a fence and Jessie was actually on a tiny walk, trying to get August asleep in his stroller, and Grandma Julia was holding Levon. We hugged and agreed that he is a perfect specimen of a baby. Lily held him and I held him and her children met him. Maggie kissed Levon and hugged him because she loves babies and Gibson asked if Levon could walk yet and Owen held him twice. He really wanted to. 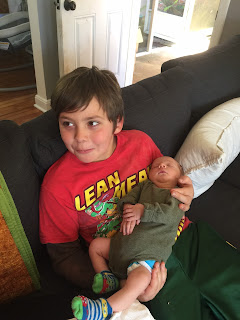 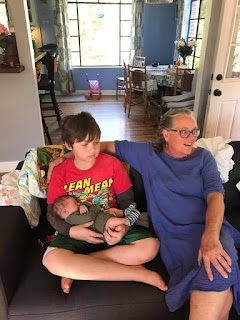 He's an old hand at baby-holding at the tender age of eight. I like the look on his face in the top picture. His mama told him to look at Levon like he loved him. Owen may be good at holding babies and he may indeed love them but he IS eight years old and eight-year old boys don't look at babies like they love him.
Got it?
Good.

We did not stay long because the five of us were like a circus and Jessie was really trying to keep August asleep for a little while. Levon slept through it all. 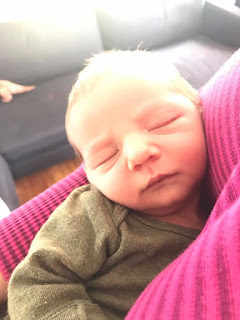 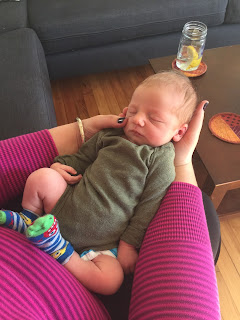 It was a short visit but a sweet visit and we all had a little slice of still-warm prune cake and Jessie said that she could eat the whole thing by herself and I told her that I would gladly make her another and I would. She looks so good, Jessie does. She does not have that mushroom complexioned, weary, exhausted look that most new mothers get but instead, looks just like herself, only even happier. As I recall, Lily always looked the same way after her babies were born. I obviously gave birth to some strong women.

I brought Owen and Gibson home with me for the rest of the afternoon and we did all the usual things including goat feeding, 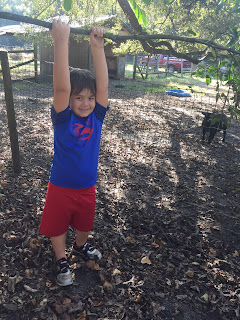 Gibson, who announced to his mama today after she made him laugh, "Mom, you break me up!"

playset playing, a card game, the matching game, having delicious cocoa and chips, AND the boys played Wii games for a little while. We saw Dearie the rooster who looks to be fat and sassy, next door in the goat pen. Since there are all those new hens coming up, I suspect he'll be happier still as they reach maturity. Unless my neighbor's roosters kill him. I finally drove my big boys back home and got another hug from Maggie June who acted as if she hadn't seen me in years. MER!!! she says, and lifts up her arms to me and cuddles into me and pat, pat, pats my back. Right now she has two skinned knees because she is a rough, tough cowgirl and I love her to pieces. And I swear to you in the one week since I have seen Owen, he has gotten taller. And quite possibly more handsome. We were looking at Levon's chin cleft wondering where in the world that came from when suddenly we remembered that Owen has one too, so I guess it comes from my family or Mr. Moon's. And I got to sniff and hold and cuddle the tiny little man and it was really good to see Julia and Hap again too. They'll be flying out tomorrow morning. Hap flies them in a little two-seater plane and that is pretty darn cool.
My only regret today is that I did not get to see August but I'll see him tomorrow, most likely, when I take the salad and bread over to his house.

I'm going to eat some of last night's curried vegetables and chicken for my supper tonight and I am pretty excited about that. There are green beans, onion, eggplant, carrots, garlic, mushrooms, ginger, peppers, mustard greens and beet thinnings and I don't even know what-all in that stuff and it is delicious. And I started reading a book last night that had me staying up until my eyes didn't know what they were seeing and I can't wait to burrow back into my cozy bed and take it up again.
The book is Himself by Jess Kidd and at least so far, I am absolutely entranced and also completely gobsmacked that it's Ms. Kidd's first book.
I mean, please. Stop it with the talent, woman!
Not really. Keep it up. I have a feeling I'm going to want more.

So that's it. That's the story of a Sunday so busy and so happy and where I was so glad to be living this specific life that I didn't have time for a moment of angst or anxiety and days like that are rare and beautiful and I appreciate every second of them.