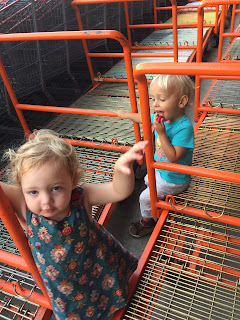 I have just not felt right the last two days and this morning I could not face a walk and so when Jessie said she was taking August to baby hour at the library and then going to Costco I asked if I could meet her and she said of course.
Baby hour is always just a joy for me. I love the little kids and I love the mamas and the daddies. I look at the mothers as they sit on the floor and handle their children and they seem so young, so beautiful and I wonder if I was ever that young, that limber and lovely and I know I was.
Eighty-five lifetimes ago, perhaps. But still...
Lord, I wish I'd appreciated it more then.
Sigh...

Lily met us at Costco with Ms. Maggie June and she and August cracked each other up and ate all the samples they could get their little fingers on. Magnolia laughed so hard in what we call the "coldy room" that I thought she was going to literally bust a gut. After we finished the shopping, the kids decided that the lined up pallet carts made the very best baby obstacle course ever. 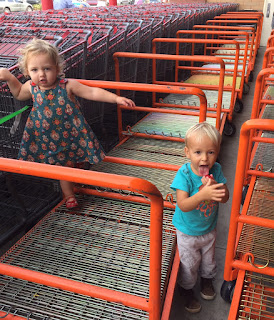 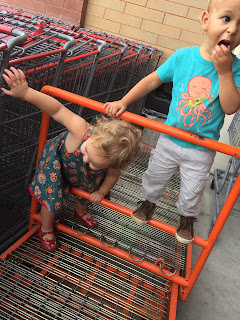 August is eating a tomato there. Both of the children love those little cherry and grape tomatoes and if your Costco carries them, you might want to try them. I love them too.

Mr. Moon didn't get a lunch packed last night due to the fact that he went to a basketball game after work and I didn't have his lunch box to pack so he texted us and asked if we'd all like to meet him for a noonday meal and Jason joined us too, so it was a big deal. 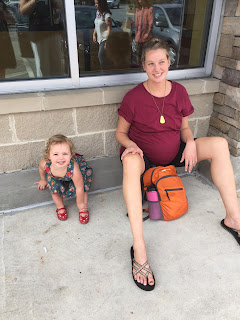 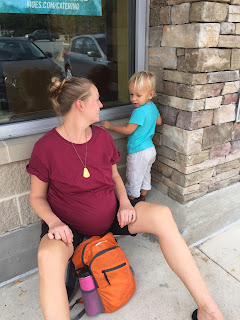 Waitin' on Bop. Both of those babies just about jumped out of their skin with joy when he showed up. They flung their arms about and shook with the excitement of it. BOP! BOP! Maggie threw herself into her grandfather's arms and August kept running up to him and poking him and saying, "Boop!" and running away, giggling madly.
I have no idea what that's about.

I actually saw Jessie walking a tiny bit like a pregnant lady today for about one second while she was having a Braxton Hicks contraction. Little King Richard just is not ready to be born yet and that is the way it is. I mean, he may change his mind tonight but for now, he is happy where he is. Honestly, though, the last few weeks of pregnancy are all a part of labor where the uterus tones up and the cervix begins to open and the baby settles down into the best position to be born. This is all part of the process and if paid attention to, is sort of a wondrous and perfect thing. The body and the baby work together (as they do in "real" labor) and some of the actual work of it all gets done before the mother even begins to realize that the labor has truly begun. This is just one of the gozillion reasons that trying to make sure that every woman gives birth within x-amount of days of her due date and inducing her if she gets too "late" is a ridiculous idea. Some babies take 38 weeks to cook and some take 43. Sure, sometimes there is a legitimate reason for mothers to be induced but not nearly as often as the new thinking on the subject seems to go.
Ah, there's always a new fad in childbirth which medical science deems correct which generally turns out to be false and useless and actually often harmful.

One more bit of news. 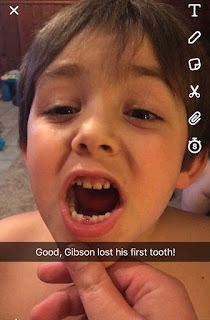 I swear to you, last week when the boy showed me that his tooth was loose, I cried a little bit.

He's growing up. They all do no matter what our feelings on the matter are.