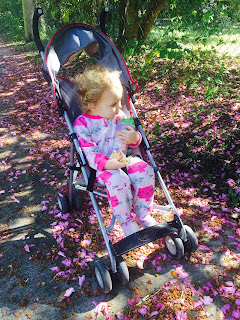 Ms. Magnolia and I had a lovely day. One of the things we did was to walk down to the post office and then down Main Street to see Ms. Liola. I don't think she and Maggie had ever met before so we were way past due on that. Maggie was a bit shy around Ms. Liola but when we left she did say, "Bye-bye," and that was good enough. We also ran into a guy who lived around here when we moved to Lloyd but who then moved to Monticello but I think he's moved back now and I can't remember his name. His brother's name is Mango and his name is a type of wine like  Chablis or Chardonnay but actually, I think it may be Pinot. Oh well, whatever his name is, he politely asked Maggie if she'd like to share her crackers but she wasn't having any of that. Uh-huh. She held on to those crackers for at least half an hour. I'm not sure she even had a nibble of one but she wasn't going to give them away.
We fed some other crackers to the chickens and she wasn't thrilled about that. Maggie seems to think that the crackers all belong to her. But we had a good time, sitting on the kitchen porch steps and throwing crackers to the birds and every time one of the roosters crowed she would put her chubby, dimpled hand up to her mouth and make an extremely surprised expression and then I would do the same and we would both laugh.
This never got old, all day long. You'd be surprised how often roosters crow during the daytime. 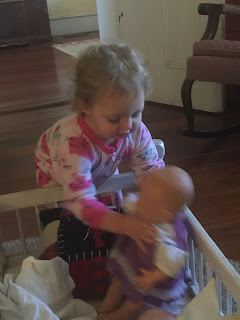 She played with babies quite a bit and I just could not get a decent picture but at least you can see her serious little face in this one. She would lay them down and put their cover on them and say, "Good night," and then immediately take them out and start the whole process again. My god, but she is so darling. We also played on the play set and she climbed the tower and slid down the slide and she wanted me to push her in the swing and so of course I did. She had a snack of banana and cherry tomatoes. 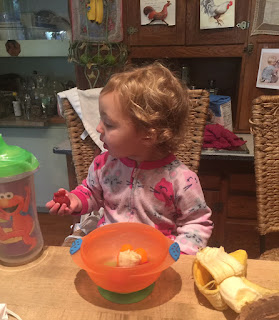 I made her some sort of fancy fake blue-box organic macaroni and cheese for her lunch but she really didn't eat much of it. I think she was too busy to eat much today.
By the time her mama got here she was a tired-out little girl, but still not fussy. It is surprisingly easy to keep a child happy when you do everything they want you to.

It's so funny how different and yet, how similar Maggie and August are. They are both terrifically intelligent but in different ways. Maggie knows all of her colors and just spontaneously tells you what color things are whereas August has no real interest in his colors yet but can already build a block tower. They are both incredibly engaged little souls who like to do tasks of their own devising and they both have pretty darn large vocabularies for kids their age. Without a doubt, they are both exceptional in all regards. I can say that with absolutely certainty because they are my grandchildren and therefore, I am completely objective in judging these matters.

After Ms. Magnolia left to go home with her mommy, I got out in the garden and did a little more weeding. It's actually starting to look like a garden. I put the sprinkler on in hopes that the seeds I've planted in the last few days sprout and that the onions I planted take root. 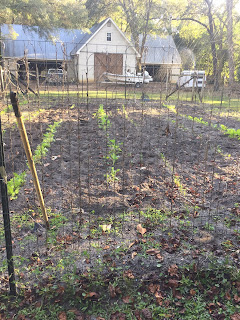 I desperately need to mulch but that involves real physical labor in that I have to rake leaves and haul them to the garden and spread them. I'm trying to gird my loins for that one. In the meantime, I am just glad to have green things to eat which are so fresh they practically bite back when you chew them.

Life in Lloyd where all is well.