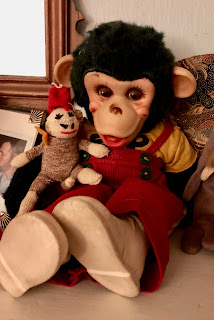 That is a Zippy doll exactly like the one I had as a child although not the same one. When eBay first started up, the only thing I could think of that I wanted was another Zippy and eventually, I found this one and bought him.
I loved my Zippy more than words can say. I wish I knew what happened to him. He was the first true love of my life and when I see him up there on the mantel of one of my bedrooms, he brings me a sense of sweetness. He is holding a tiny monkey doll that Lily made me when she was a little girl, just learning to use a needle and thread, and they have lived there happily for at least a decade. I do let the grandchildren touch them and cuddle them but I always watch to make sure that they are gentle with the old chimp and when they are through with him, I put him back up on his perch with his little friend.

There is absolutely no reason I am talking about Zippy tonight except for the fact that I have been playing with my new camera and took his picture a few minutes ago. I am truly enjoying my new phone but I feel, as I have with each of my computers AND iPhones that I could probably launch a manned spaceship to Mars with the power and technology I have if I only knew how. I do not know how and in fact, had to ask Siri how to access the flashlight on my phone. I've been fooling around in the Settings whatever-you-call-it and yesterday discovered a new word which is "haptics." Specifically, "system haptics."
Here is what I found:

Okay, you may well say- what the hell is "proprioception"?
Back to google:

And now I am just as confused as ever but baby, I have system haptics activated because I definitely want to experience the unconscious perception of movement and spatial orientation when I use my iPhone. Who wouldn't?

It's all so Star Trek to me. And I sort of love it.
And it all makes me feel like a lot of folks are still using psychedelic drugs which I approve of heartily if done by ADULTS IN A PROPER SETTING AND AT A PROPER TIME!
Steve Jobs took plenty. Trust me.

Wow. This is not the post I set out to write tonight and in all honesty, I had no idea what I was going to write but here we are, tripping down the path of free-range, stream of consciousness.

It's been a good day. I did a little of this and a little of that and not much of anything.
However, I DID make biscuits so the day was not a total waste.

Here's a picture Jessie posted on Facebook this morning. 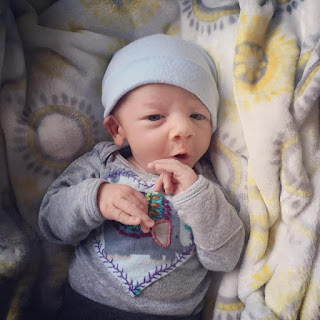 The heart that I sewed to his onesie and then embroidered seemed so tiny until Jessie put it on Levon. She practically snatched the onesie from me last night saying, "It's ready. I love it."
"But, but, but..." I sputtered. "I haven't outlined the elephant or filled in his feet or..."
I have to go buy some more onesies because I had too much fun doing that to not do more of it. And I want to get some new patterns to make Maggie some flannel dresses for winter. I have beautiful floral flannel prints left over from making quilts in the old days and I want to use them for my little girl.

And tomorrow morning I am going to go kayaking with Vergil and August on the Wacissa River. As I think I said before, I am so honored that Vergil asked me to go with them. He wants to take August paddling and needs someone to just sit and hold the boy and love on him and give him snacks. I think it will be a beautiful experience.
And I will have ample opportunity to use my new iPhone camera. Which I will put in a Ziplock.

And there you go- from Zippy to a Ziplock to put my newest plaything in while I am paddled down one of the most truly gorgeous, serene rivers in Florida, holding on to my grandson, seeing what humans have been seeing for thousands of years, unspoiled and in its natural state.

There will probably be alligators! Or, maybe not. It's going to get into the thirties tonight and they'll probably all be holed up somewhere doing whatever it is that alligators do in winter.
Wait. I just looked that up.
They BRUMATE!
What?!
Here you go.

I have never heard that word in my life.

Sixty-three years old and I learn new things every day.