Call it what you will- border grass, liriope, or monkey grass- that shit sucks.
People plant it as a nice, natural border which grows well in shade or sun and has a pleasant lavender colored bloom and it's lovely and pretty and then THE NEXT THING YOU KNOW YOUR ENTIRE YARD LOOKS LIKE A LAKEBED COVERED IN EEL GRASS! Or an ocean covered in sea grass. Or whatever. But whatever it was you were attempting to be bordered will be encased in the stuff, smothered, choked, and eventually DEAD.
Unless you have a full time gardener or you're more attentive and responsible than I am.
I've got swaths of border grass that are ten feed wide. I'm not even kidding you. And here's why- not only will it grow anywhere but it's a bitch to pull. The roots grow like nylon nets and intertwine and establish themselves with the strength of the devil. It should be illegal.
Because it is evil.

So I spent approximately four hours this afternoon trying to clear some of it out of a rose bed. I filled a yard cart with my pullings and the bed still isn't entirely done and trust me- I did not begin to get all of the roots. But I think the roses can breathe again. 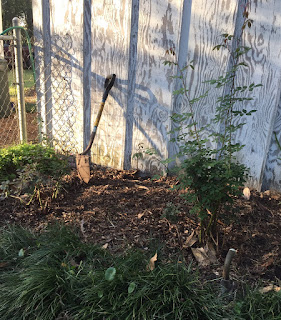 And FYI- the roses and the border grass were there when we moved here and I've been battling that shit for thirteen years now. To no real avail. AND the roses never put on much of a show. They don't get enough sun.
Oh well.
The work keeps me out of the pool halls and gives me an excuse to listen to my audio books.
I just finished listening to TC Boyle's The Terranauts and I enjoyed it, every minute of it. I don't do book reviews but the NYT's does and here's the one they did on this particular novel. I mostly like Boyle's books with a few notable exceptions and his The Tortilla Curtain is one of my favorite books ever. It's not a comfy book to read (none of his really are) but it's a damn good one.

So. A day not wasted and I planted my three tomato plants and two half-rows of basil, one the regular kind, one purple. Maurice joined me in the garden when I picked tonight's collards which are simmering away as we speak. 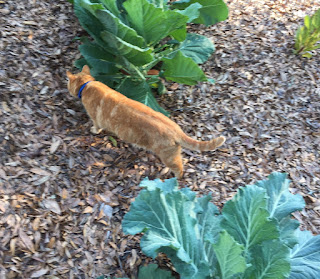 I'll be cooking the fish Mr. Moon caught yesterday when he gets home. Should be a nice supper.

Owen was seizure-free today and had his first baseball practice of the season and tomorrow will be his last basketball game of the season. We plan on being there, of course.

In chicken news, Miss Violet has not been seen again since she appeared for breakfast yesterday and I am now wondering if she's sitting on a clutch of eggs. I did a quick search in the garage and couldn't find anything but chickens are sneaky and can be right under your nose before you see them. If my theory is correct, I'm not even sure the eggs would be fertile. I haven't seen any sex between her and Mick but once again- chickens can be sneaky, especially the banties which seem to me to be one step wilder than their bigger cousins.

So that's been my day. I can't find much fault in it except that my tooth is hurting again. And that's just life. If I have to get it pulled, so be it. The wisteria on the arbor is starting to fuzz up with its blooms and I expect the potatoes to break ground any day now. I've done what I wanted to do on this fine, cool, blue-skied day which was to take a walk, to be aware of what was around me, come home and tend to a few things here, kneeling in the dirt as usual and letting this big blue planet roll and tumble in its holy orbit and try to make my own actions as peaceful as possible and as constructive in their own simple ways as I could make them.

I think I've done that for one day. One day, at least.

And you? What did you do today? Did you find any moments of peace, did you stop for a second or two to appreciate something which was worthy of appreciation? A patch of sky, a blooming flower, a budding branch, a stranger's smile, a line of poetry, a baby's hug, a lover's kiss, a familiar's presence, a dirty joke?
I hope so.
Let me know. Especially the dirty jokes. I can't remember them for a second but I sure do love them.