A Lot Of Things Going On

I listened to as much of the hearing today concerning the FBI investigation of the Russian involvement in the 2016 election as I could. I missed the part where Comey told the Intelligence committee that no, Obama had not "tapped" Trump's "wires" (what century does that man think we live in?) and I wish I'd heard it. Sure, I can go back and watch it but I wish I'd just heard it as it happened.
It sounds to me as if there is an amazing amount of evidence that not only was Russia involved in the election but that many of Trump's business minions were as woven into what was going on in that country as a strand of silk is woven into a Black-Widow spider's web.
We shall see. Time will tell. But finally and at last there is hope that this entire administration will be brought down.
I am old enough to remember Watergate and the furor of that investigation. I also remember when Richard Nixon resigned. I was living in a tiny shot-gun apartment right by the railroad tracks in Tallahassee, next door to Bill and Ruth Wharton on Park Avenue and Bill and I watched Nixon give his speech as his daughters played with my old Barbies and then, we listened to the Beach Boys.
Some things you just don't forget. A bad, horrible dream suddenly ended, the sweet summer sun busting through with the joyful harmonies of what might possibly have been the very opposite promise of American dreams as the ones Richard Nixon had offered.
Endless Cold War versus Endless Summer.

Here's part of the speech if you want to watch it.

I was surprised, when I looked the clip up on Youtube and began to play it, that the Miller Center was the one presenting it. The Miller Center was begun by my great uncle, Uncle Burkett, and seems to be a pretty big deal when it comes to presidential history. Not to stray from my subject, but Burkett was a very wealthy man by the time it was all over and I'll never forget the time we got to ride on his yacht from its berth in the harbor in Miami to a dock where we alighted and cut in front of everyone waiting at the fancy-pants restaurant there for our luncheon.
Burkett also gave a bunch of money to the city of Chattanooga where there is now a lovely park downtown which is named after him. I am glad that his money went to Good Works but I can't help but wish that he'd at least left me his house on Lookout Mountain or maybe the yacht because I'm selfish like that.

Anyway, just the thought that justice may be done in the case of Trump is a cheering thought and also, of course, it is Gibson's birthday. He wanted to go to the Chinese buffet for his birthday lunch and so I met Lily and Owen and Gibson and Maggie there (after a week of spring break, today was Teacher Planning Day) and we celebrated with traditional Chinese foods such as noodles and chicken on a stick and ice cream. Gibson wanted to get his own ice cream since he is now five and I accompanied him and he did a good job of dipping the scoop into the giant vats of what I am certain is the highest quality ice cream available and depositing it in his bowl.
"What a good job you did!" I told him. "Now that you're five, you can do lots of things you couldn't do before!"
He agreed and sat down and ate his ice cream, doubly satisfied for having served himself.

I spent a while this afternoon talking to my next-door neighbor. Yes, the Trump-Pence sign is still up in their yard but I can't help but like the woman. She's tough as a nail and is my go-to for all things chicken. She had called me and left a message that two of their chickens had been taken by hawks. She knew for sure because they saw one of the abductions occurring.
"That hawk was as big as a chicken!" she said.
And I believe her having seen a few hawks swoop, dive, and take a chicken of mine before.
I asked her what to do about Violet and she gave me what I consider to be some good advice. Give her another week and then, if none of the eggs hatch, to get a few biddies, the youngest I can find, and put those in with her so that she thinks that her eggs have hatched and will move on to that phase of motherhood while I dispose of the eggs.
The chicks in the bathtub are too old to fool her, I think, and I'm sure they are too old to bond with her as chicks should bond with their mothers.

And speaking of which, the bathtub babies are doing well and are now entering the awkward stage of getting their feathers and losing their fluff, the gangly chicken equivalent of human preteens, I think. 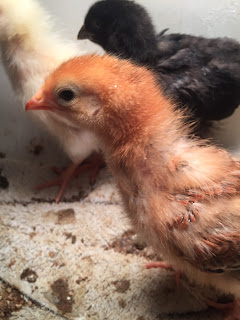 Nicey 3-3. I put a bug that came in with the sheets from the line into the tub and Nicey grabbed it and ran off to a corner and ate it. 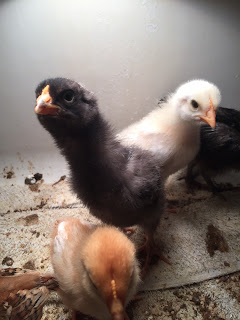 Hawk stretching out her neck to see if I have any grapes, with Nicey and Trinky looking on. Trinky looks a bit like a founding father, doesn't she? That steely stare of wisdom and determination.

And that's it. First day of spring. Gibson's birthday.

I've enjoyed it all.