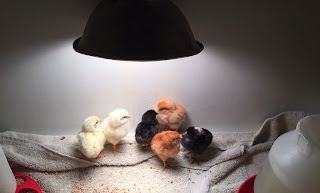 Don't they look like they're being interrogated? Can't you just see them asking for tiny cups of coffee and their one phone call?

So. There they are. All half a dozen of them. They seem happy and healthy and are eating and peeping and drinking and pooping just as baby chicks should do.

Jessie and August came over this morning to go with me to Monticello. 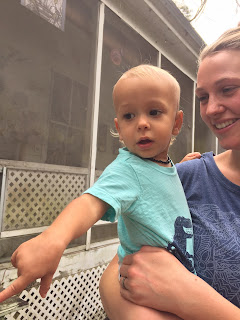 Before we went we threw some bread to the grown-up chickens from the back steps. August is not afraid of any of them one tiny bit, not even Mick when he flaps and crows which is a pretty impressive display of manliness. That rooster flaps so hard that I was standing three feet away from him when he did it and the wind cooled my ankles and made my dress blow up. Dude has wing-power! And August does a mean Mick Jagger imitation.
Mick Jagger the rooster, that is.

We went to the thrift store in Monticello and got August a shirt and Maggie a dress and oh yeah, August got a stuffed penguin, too. Then we walked to the Mexican restaurant where we had delicious foods and August ate everything he could, and he loves salsa and just licks it off his chips which he dips and re-dips and re-dips. The chips are mostly just a salsa-delivery system in his opinion and if we all followed that practice we'd save a few calories.

Then we went to the Winn Dixie because yesterday when I went to Publix and spent eight hours wandering the aisles and spent four thousand dollars I forgot things like bananas and black-eyed peas. The Winn Dixie is always a hoot. A place where everyone is friendly and old men wearing Make America Great caps flirt with your grandchild.
What can I say?

And then, finally and at last, we went to the Tractor Supply. We heard the babies chirping the second we walked in the door and headed back to the where the chicks were. They had about six varieties of peeps and also baby ducks. The lady working there said that none of the signs were right and she didn't really know much about them and so I basically just said, "Two of those and two of those and two of those." 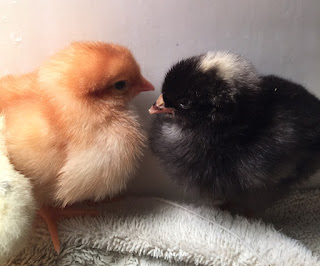 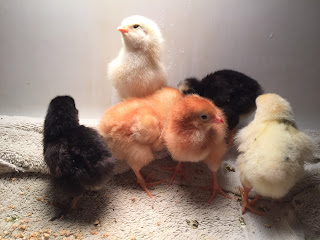 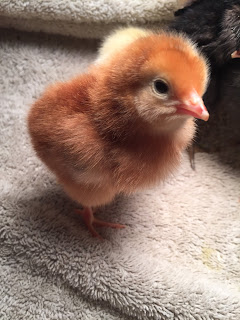 I think that may be Nicey Three-Three. I haven't yet determined who Dearie (Deerie) Two-Two is yet but Gibson insists there will be one and I agree wholeheartedly. Billy asked if Waylon could name one. And of course he can!

And now I have my baby chicks, all cozy and warm and getting comfortable in the bathtub in the old bathroom we don't really use. They are spreading their feed out because chicks are messy creatures and sipping their water delicately because they are graceful creatures too. I love how they get a beak full and then throw their heads up to swallow it. I am mesmerized by them and could kneel on the bathroom rug, leaning on the edge of the bathtub for hours, just watching them. I have no idea why. Is there anything more common and familiar (to me, at least) than baby chicks? And yet, is there anything cuter?
I really plan on spending a lot of time with these chicks so that they are familiar and comfortable with humans and will hopefully interact with the grandchildren more although honestly, chickens are not really pets in the grand scheme of things and as we all know, their lives are perilous and the more I know them, the more it hurts when I lose one.

Well. Isn't that what life is? Daring to love despite the odds?

At least it's part of what life is.