Baby Chicks Are Messy Creatures, Not Unlike Life Itself 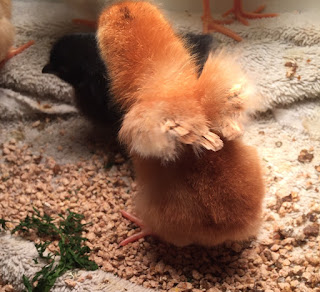 Nicey 3-3 is already getting her wing feathers and trying them out. Or his. Could be a rooster.
They all pecked at the carrot greens and tomorrow I'll clean up their home and discard the food they've kicked out of the feeder and which they then, for some reason, don't want to eat. I'll give them fresh water with the electrolytes and vitamins and probiotics in it and I'll take out their dirty towels and put clean ones in. I used to use cedar shaving bedding for my baby chicks but all they do is kick it in the water and I can't see one reason to use that over plain old towels that I can wash in the washer and hang up on the line. Easier to shake those out than to clean the tub they're in with shavings anyway. Not like I don't do laundry every day.

And that's the baby chicken news. Mr. Moon claims he saw the ghost-appearing Violet this morning and I believe him. He said she appeared to be coming from the woods. God knows what she's got going on.

I still feel ragged. I tried to go outside and work some and after about ten minutes decided there was no reason for that foolishness and I got in the bed and slept for a few hours. Got up and did a few things around here. Mr. Moon and our partner in Dog Island are watching an FSU football game and tomorrow they're going over to the island to see if the house is habitable as Hank and some friends of his want to go over there on Saturday or something. One never knows with Dog Island if the electricity is working or if there was a major power outage which would mean that everything in the refrigerator is gross and disgusting or if the AC works or if the roof was blown off. Or if there's running water. Or if the car works to get you from the dock to the house.
I made a little pan of brownies for my husband to take to help sweeten the trip if things are FUBAR.

So it goes, so it goes. Lily's sick and Jessie doesn't feel so well either and August has a snuffly nose. Not going to be a big weekend for most of us, I fear but I'm not too worried about it. As long as no one gets seriously ill and no one drowns and the cats don't eat the baby chicks, it'll be okay.

Relative to the big picture, at least.