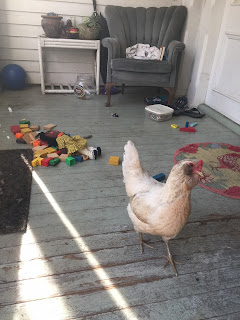 Chicken on the porch. With toys and blocks.
My life, summed up in a picture.

Hank and Rachel and Lily and Jason and their three and I all went to Japanica and you know what we ate. Many salads with ginger dressing and bowls of miso soup and curries and sushi. And so forth.
Delicious, as always.

We went to Big Lots for some reason. Rachel needed something to wear at work for St. Patrick's Day. That was one reason. 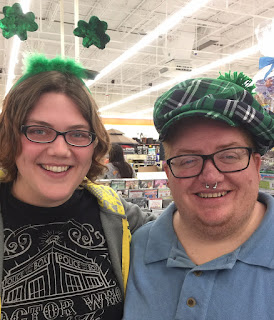 I bought Gibson some birthday toys and then went to Publix where I bought him his very own jar of pickled okra because that's his favorite food. His party is on Sunday. Hank said to Gibson while we were in Big Lots talking about his birthday, "So, Gibson. How old are you going to be? Twenty-five?"
Gibson looked at him with a level stare and said, "No. Five."
He was not amused. 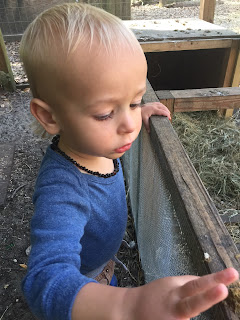 We told August not to touch the poop so guess what he did?
Yeah, he touched the poop.
He also put some chicken feed into the little coop where Violet is brooding. He loves to gives treats to animals. 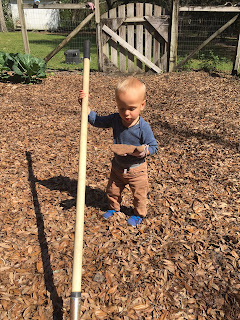 He apparently wants to garden with all of his heart. Here he is with a hoe and a glove. He was very, very serious about using both properly. Jessie says that his favorite toys are a calculator and a hammer and he often walks around holding both of them.
His father is an engineer.
What more need I say?
He is also currently in love with shovels.
Yeah. The apple didn't fall far from that tree.

He is the most curious and busy boy. In that, he reminds me of his beautiful mother.

Anna and Joris and Jessie and I talked about a lot of things ranging from good southern buffets around here to US politics.
Which made me cry a little bit because I'm so ashamed.
I apologized for America.
"I'm so sorry," I said to Joris.
"It's okay," he said. "I have learned that you have to separate American politics from Americans.
He was being nice which I appreciated but I still felt terrible.

While we were hanging out in Lloyd, Lily and Jason took the kids bowling. I got these pictures. 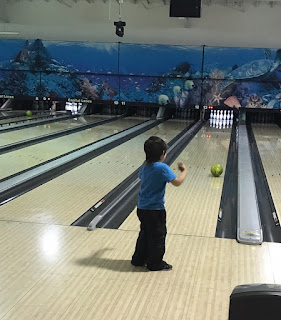 Turns out that Gibson won the second game with Owen following and then Lily and then Jason.
Guess that Wii bowling practice has paid off! 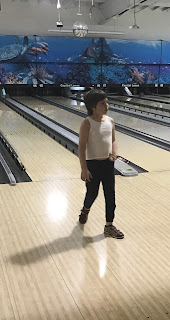 Miss Magnolia did not bowl. She napped. 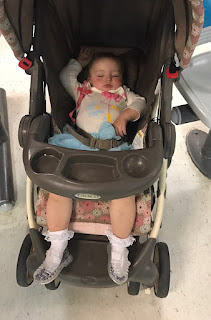 In a bowling alley.
Oh, to be a baby.

So that's the way this day has gone. I finally went to cook the corned beef and realized that it takes 2 and a half hours, at least, and so it is now merrily dancing in the pressure cooker. The church next door has gathered its members and there is singing as well as drumming. Mr. Moon is digging worms for a possible fishing jaunt tomorrow. Owen might spend the night and get up early with his Bop to be a part of that or he might not. We shall see.
I bought jars and ingredients to make pickled beets and that too may happen or may not.
Again, we shall see.

But as god is my witness, there's about to be a martini.