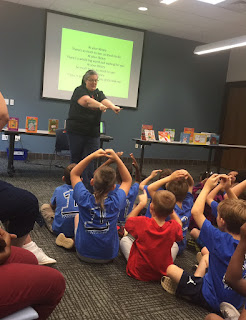 The library field trip was just swell and made even sweller by the way the classes paid attention and followed directions and were respectful to the space, the librarian, their teachers, and each other.
Quite frankly, I was shocked.
First we got a little tour and then everyone was allowed to pick out books to read for a few moments. Owen and I read about snakes for a bit. We sat next to his best friend Chase, and his mother as they read their books on the bench. This is the same boy that eats his lunch in the classroom with Owen, the one who went and got an adult when Owen had a seizure. They are just the sweetest boys together and I love watching them interact.
After the tour and book reading, we went into the activity room where there was singing with sign language, as you can see above. I was quite shocked that Owen participated. But he did and quite enthusiastically. That's him there to the left of the boy with the red shirt. He has a new haircut. It is quite a haircut. His dad did it for him and he refuses to get his rat tail cut and now the sides of his head are shaved and...well...he reminds me of a little Native American boy which is odd, because when Lily was young, she too reminded me of a Native American child. 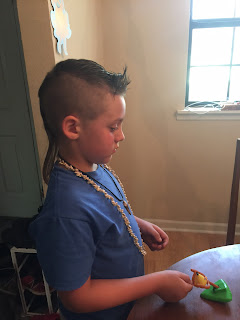 His teacher and Chase's mother both told me they love it. Owen himself seems to be a bit unsure about whether he likes it or not. Last night, he did not, and in retaliation, shaved his dad's head bald, which I suppose Jason just accepted with grace because that's how he is.

Anyway, after the singing there was a question and answer period and again, I was surprised at the very intelligent questions the children asked about the library. These are first graders!
Then we all lined up and the children got back on the bus and I met them at the park where we all ate our lunches and then the children played. I talked to Chase's mother for quite awhile and honestly, I really enjoyed it. She's as sweet as her son and I felt very comfortable with her. We were allowed to take our kids home from the park if we wanted and so I signed Owen out and we went to the Bad Girls Get Saved By Jesus thrift store which we haven't visited in a long time and Owen got some toys and I got a very cool poster which I am going to give to Lon and Lis for their studio if they want it. Then I took Owen home and he and Gibson began immediately to play with a game we'd bought and Maggie was delicious and adorable in a beautiful little April Cornell dress that I bought her last year in Asheville when I was visiting Jessie.
Did I get a picture?
No. I did not.
By the time I got around to it, her mama had taken her dress off to put her in her high chair to eat her lunch.
I kissed everyone good-bye and thanked Owen for letting me come with him on his field trip and he thanked me and then I came home to deal with juvenile chickens.

The babies that Kelly brought me yesterday turned out to be older than the ones I had out in the tractor coop and really far too old for the bathtub so I let them spend one night in there and then when I got home this afternoon, I moved the big chickens' feeder and waterer outside and blocked off entrance and exit to the big coop and took Nicey and Dearie and Nora and Trinky and Tronky and Hawk out of the tractor coop and set the feeder and waterer from there in the large coop and gave them a huge bolted arugula plant and then went and got the new chicks (as of yet nameless) and put them in the new coop too. They are being shy, of course, and hiding under the little roost house but I gave them all fruit and my babies seem to be perfectly happy in the bigger space. I sat in a chair I pulled into the coop and threw them watermelon and honeydew and they pecked away, mostly at the fruit but sometimes at my toes. 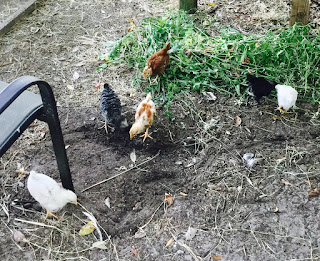 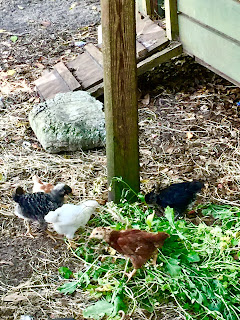 Ah, the baby-bird shuffle.
The older birds are mystified as to why they can't get into the coop but I got three eggs today so they're not too disturbed.

I have cleaned out the tub again and washed the bedding towels and would not be surprised at all if I found my way back to the Tractor Supply to get six Barred Rock babies.
We shall see.

And no, it never did rain and yes, it as dry as ever. But the wisteria has come back out although the blooms are not as profuse as usual due to that nipping little freeze we had. 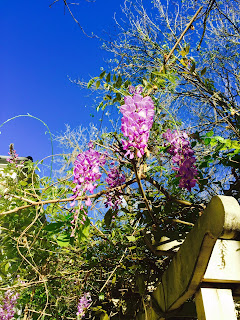 Mr. Moon is home and we just made a Friday martini and went out to the coop and fed the babies some grapes and they chirped and fluttered and enjoyed themselves and their evening treat.

I think about how when we moved here thirteen years ago we had no grandchildren and no chickens. We had four dogs and two daughters still in high school.
Those daughters are mamas now, those dogs long gone and buried. I can't miss any of them because I see the daughters all the time and have as good or a better relationship with them now then I did then and of course it goes without saying that I don't miss the dogs. My house is filled with toys and books, and Owen and Gibson know this house as well as I do. It's a house that needs and wants children. When Kelly brought the baby chicks yesterday, she brought her son Wiley Cash and he walked around this place like he'd been here all his life even though I think it was the first time he ever visited.

Owen asked me today if when I "passed" (and where did he get that word?) I'd leave him the love couch. I told him I'd just leave him the whole house.
"Wow!" he said. "Then I can live for free and get a job!"
Well, something like that.
Maybe.
Who knows?
Not me.

I'm going to cook pork chops and sweet potatoes.
Get out the cinnamon.